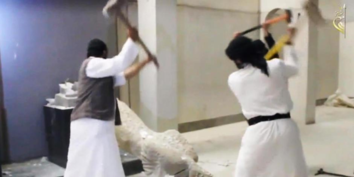 In response to a recent Homeland Security Today article on a new report by National Center for Policy Analysis Senior Fellow David Grantham in which he stated a doctrinal change in how military strategy accounts for cultural heritage will help diminish an important funding stream terrorist groups need to fund operations against American forces and will improve the image of embedded US forces and discourage cultural infighting in their area of responsibility, is refuted by Joseph Coplin, co-owner of New York antiquities dealer Antiquarium on behalf of the American Council for the Preservation of Cultural Property, and James McAndrew, the former head of the Department of Homeland Security’s International Art and Antiquity Theft Investigations Program.

Coplin and McAndrew told Homeland Security Today in a joint statement, “There is a great deal of incorrect information being disseminated by the media, generally groundless numbers generated by special interest groups that are parroted by the media without the benefit of fact-checking. Conceiving and implementing military or legal agenda based on bad data is dangerous.”

Stopping the illegal antiquities trade and protecting movable cultural heritage in conflict regions should be one of the United States’ military’s top priorities, according to Grantham’s report.

“Since money earned from the sale of antiquities directly finances the very organizations pitted against US armed forces,” Grantham said, adding, “all relevant military assets and legal procedures should be used as tools for interaction and preservation.”

Grantham asserted “the US government and the Department of Defense should give greater precedence to the protection of movable cultural heritage in wartime in order to diminish the capabilities of terrorist organizations.”

“The illegal antiquities trade is often treated as a criminal operation – not a national security concern,” Grantham said. “This mindset needs to change. Government indifference and customer ignorance here can be as dangerous as premeditated support for terrorism.”

Coplin and McAndrew pointed to a December 26, 2016 report by theCommittee for Cultural Property which stated, “ISIS’s estimated total income from all sources, predominantly from oil and extortion, was approximately $1 billion in 2015. The largest current estimates of ISIS income from sales of art, antiques and antiquities come from the US Department of State, which acknowledged ISIS had earned only ‘several million dollars’ through the antiquities trade since 2011, when ISIS first became a force to reckon with.”

Coplin and McAndrew said, “No antiquities associated with ISIS have ever been located in the US, despite a $5 million reward announced by the Justice Department in September 2015. In other words, ISIS has earned only a tiny fraction of its income – at the highest estimate, less than one half of one percent – from looting art, and none of it seems to have come from the US.”

“Yet, this year, the Antiquities Coalition and other anti-art trade interest groups pummeled Congress for months with allegations that looted art provided billions of dollars to fund terrorists across the Middle East in order to pass HR 1493/S.1887, The Protect and Preserve International Cultural Property Act in April 2016,” Coplin and McAndrew said, adding, “Any money at all contributed to ISIS is a bad thing, of course, but so far, there is no evidence that any money at all has comes from sales of ISIS looted art inthe US. It appears … the congressional initiatives to tie the art trade to terrorism is another example of how misleading information is used – at great cost – to influence the unsuspecting American public.”

Continuing, Coplin and McAndrew said, “Grantham’s article’s underlying message being, while in theater, our armed forces and any other adjoining coalition forces, should include, and make a priority, military planning prior to and during engagement to locate, identify, protect, monitor and even take possession of moveable artifacts that might otherwise be looted and exported to non-conflict countries. The author, however, embellishes the relationship between the destruction of cultural property and the supposed revenue generated by terrorist organizations from the sale of looted artifacts.”

“It has been stated and agreed upon by experts that the probable dollar numbers are far less than originally speculated and subsequently reported,” said Coplin and McAndrew, noting that, “The notion that ISIS is involved in the art trade also defies the evidence of the groups’ clear program of destroying non-Islamic items as they are perceived as idolatrous. When the Palmrya Museum was recaptured last year by [Syrian President Bashir] Assad’s forces, virtually all of the valuable portable pieces of ancient statuary were found defaced or destroyed, not looted.”

Coplin and McAndrew told Homeland Security Today that, “Grantham’s article provides absolutely no evidence that objects purportedly looted by ISIS have been sold to art collectors –that is because there is no evidence available. There have been no seizures of such material at US ports of entry, or by European customs. There have been no pieces removed from auctions, art fairs or dealers’ galleries that were proven to originate from the current crisis, despite the hundreds of thousands of legal and transparent transactions of antiquities that occur every year in the art market.”

“This is not, as Grantham suggests, because Western powers are turning a blind eye to such material; in fact, it is exactly the opposite,” Coplin and McAndrew said. “There have been intense efforts: legislative, law enforcement, diplomatic, social media, etc., to stop the influx of looted material from ISIS. It’s just that none of it has turned up outside of the region. Another issue that needs to be stated is that the Western antiquity market is already saturated with this type of material from the over the 100 years previous to ISIS when these common objects were freely traded. Anyone who collects this type of thing can find it in the legitimate market place in the West. Ancient Near Eastern is not a particularly popular collecting interest in the current market, partly because it is so heavily scrutinized, even though the material is relatively common.”

“[Grantham] is also misinformed when he states, ‘Government indifference and customer ignorance here can be as dangerous as premeditated support for terrorism,’” McAndrews said. “The US government has done plenty since the advent of the Monuments Men during WWII and in its response to the two Gulf Wars. Though I do agree, it’s hard to convince every general in the US Armed Forces how important is to protect cultural property when troops are dying on the battlefield. I was personally responsible for the creation of the Department of Homeland Security’s International Art and Antiquity Theft Investigations Program, which is still active today. The program has resulted in the seizure of over 100,000 artifacts and the criminal conviction of international traffickers on all continents since its inception.”

“In 2006,” McAndrew said, “I participated in a closed-door conference hosted by the US Department of State that invited high-ranking members of the Army, Navy, Air Force and Marines to discuss what measures they do or do not take to include the protection of cultural heritage sites during armed conflict. Members of the archaeological community, the US Blue Shield, DePaul University School of Law and other academic associations with the State Department were in attendance. The conference was held at Kykuit, a Rockefeller Estate in Westchester County, New York. It was organized in reaction to the media reporting that US soldiers were using archaeological sites as weapons depots and bases. When all interested parties are invited to the table to discuss issues of cultural property preservation, effective solutions can be achieved. When interested parties rely on faulty data and preconceived narratives, the outcome is less likely to be effective in achieving its goals.”

“One thing that is certain is that US antiquity dealers and collectors abhor the notion of obtaining looted and illicit art from the black market,” McAndrew and Coplin jointly stated. “It is a bad investment and a liability. Dealers and collectors would never entertain the notion of transacting in anything other than perfectly licitly traded items, and welcome the opportunity to engage, educate and contribute to the US Armed Force’s and the public’s efforts to address such concerns.”