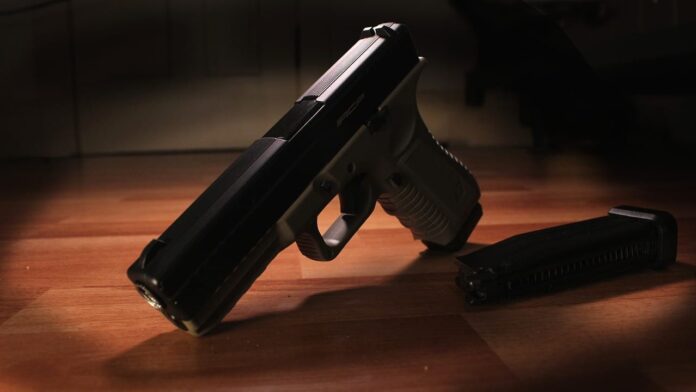 A 41-year-old Seattle man was sentenced today in U.S. District Court in Seattle to 70 months in prison for being a felon in possession of a firearm and smuggling, announced Acting U.S. Immigration and Customs Enforcement (ICE) Homeland Security Investigation (HSI) Special Agent in Charge Eben Roberts and U.S. Attorney Brian T. Moran. Nathan Brasfield was arrested in February 2020 when agents seized 17 pistols and 24 rifles from his home – most of the firearms had been manufactured at his residence as ‘ghost guns’ – guns without any serial numbers or registration. At the sentencing hearing, U.S. District Judge Richard A. Jones said he was very concerned about the sheer volume of guns and silencers Brasfield possessed. “You have your own perception of the 2nd Amendment. Your perception is completely inconsistent with the law and will continue to land you in prison,” Judge Jones said.

“Brasfield has a lengthy criminal history and has shown time and time again that he has no regard for the law,” said Acting Special Agent in Charge of ICE Homeland Security Investigations Seattle Eben Roberts. “A repeat felon, caught in possession of an illegally modified automatic firearm, is nothing short of a recipe for disaster. Brasfield, and criminals like him, should take today’s sentence as a stern warning. HSI and our law enforcement partners, working together, will seek, investigate, and ultimately bring to justice all those who seek to disregard our nation’s laws.”

“Undeterred by previous convictions and supervision from federal probation, this defendant built an arsenal of illegal weapons in his home and imported silencers from China,” said U.S. Attorney Moran. “It is shocking conduct demonstrating this defendant’s abject refusal to follow the law. I hope this prison time will break his cycle of lawlessness.”

According to records filed in the case, in December 2019 Customs and Border Protection (CBP) inspected a package from China that was labeled “aluminum tubes.” The package, addressed to Brasfield, actually contained five firearm silencers, which are illegal to possess under federal law. In February 2020, agents executed a search warrant at Brasfield’s residence and seized numerous home manufactured firearms that did not contain serial numbers. These ‘ghost guns’ are illegal for Brasfield to possess. Further, Brasfield illegally possessed more than 300 pounds of ammunition. Agents also seized the gun manufacturing equipment known as a ‘ghost gunner.’ Ten illegal silencers were also seized.

“Brasfield’s sentencing today is a clear message to those who so blatantly disregard the law,” said ATF Seattle Field Division Special Agent in Charge Jonathan T. McPherson. “Convicted felons who are prohibited from owning firearms and attempt to skirt the law will be caught and prosecuted.”

In 2015, Brasfield was convicted of being a felon in possession of a firearm and was sentenced to 48 months in prison. He was on supervised release for that crime when he committed the current crimes. Previously, Brasfield was prosecuted in state court for crimes ranging from burglary to possession of stolen property. In 2002, he was arrested and prosecuted in state court for sending harassing messages as part of an effort to intimidate a person who was associated with animal research.

The case was investigated by HSI and the Bureau of Alcohol, Tobacco, Firearms & Explosives (ATF) and is being prosecuted by Assistant United States Attorney Thomas Woods. HSI is a critical investigative arm of the Department of Homeland Security and is a vital U.S. asset in combating criminal organizations illegally exploiting America’s travel, trade, financial and immigration systems.

HSI’s workforce includes special agents, analysts, auditors and support staff. Its men and women are assigned to cities throughout the United States and to offices around the world. HSI’s international force is the department’s largest investigative presence abroad and gives HSI one of the largest international footprints in U.S. law enforcement.