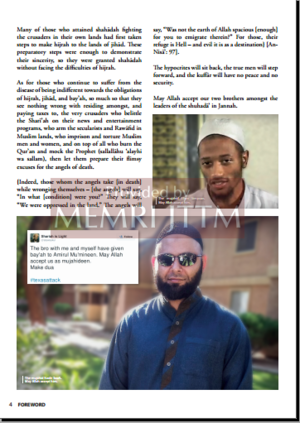 Not surprisingly, the ninth issue of the Islamic State’s (ISIS) digital English-language magazine, Dabiq, heaped praise on Nadir Soofi and Elton Simpson – the two radicalized Muslims and Phoenix, Arizona roommates killed in a May 3 firefight in Garland, Texas for their attempt to storm into the Curtis Culwell Civic Center in Garland, Texas with long guns to kill as many attendees of the Stop Islamization of America and the American Freedom Defense Initiative  where a contest for the best cartoon of Prophet Muhammad was being held.

On March 29, American ISIS operative with the alias Abu Khalid Al Amriki claimed on Twitter he was in contact with ISIS supporters in the US and that one of them was prepared to carry out an operation.

Only minutes before and after their attempted attack was thwarted — when law enforcement shot both men dead — Abu Hussain Al Britani appears to have had foreknowledge of the attack. He tweeted from his “AbuHussainAlBritani” Twitter account just before the attack that, “The knives have been sharpened; soon we will come to your streets with death and slaughter! #QaribanQariba [soon, soon].”

Almost immediately after the shooting, the two were praised by ISIS and other jihadists via social media for their martyrdom in defending the sanctity of Prophet Muhammad.

In a news bulletin by the Islamic State’s official radio station, Al Byyan, which broadcasts out of Mosul, the Islamist jihad organization claimed responsibility or the attack by Simpson and Soofi.

Since the attack in which both men were killed, federal investigators have found there was substantive advance notice of what the two avowed jihadists intended to do on various social media postings.

The Middle East Media Research Institute (MEMRI), which monitors jihadi social media sites, pointed out that, “Abu Khalid Al Amriki, upon learning of the attack on Twitter, praised the attempt and threatened more to come. He tweeted, ‘This one should hit the front page! Dawlah [ISIS] is in America! Allahu Akbar … How much do you love the Prophet? I’m sure the brothers earned their spot next to the messenger of Allah … The drawn Sword on the one that Insults the messenger of Allah. Let this be a wakeup call for all cartoonists. We are coming for you.’”

MEMRI said, “Online ISIS supporters immediately reacted to the Texas attack by praising the perpetrators and elevating them to the rank of martyrs in the cause of jihad. For example, ISIS supporter ‘Australi Witness,’ who recently called for targeting Australian cartoonists, tweeted: ‘May Allah reward the Garland Mujahedeen with a seat right next to the Prophet in Jannah [heaven].’”

"Two of the Caliphate’s soldiers attacked an exhibition in the American [town of] Garland, Texas” which “staged a competition of cartoons that were insulting to the Prophet Muhammad,” the broadcast stated. “The brothers opened fire on the exhibition, and as a result one of the police officers in charge of protecting the exhibition was injured. The brothers were killed in the exchange of fire. We pray Allah to accept them in the highest paradise.”

In concluding, the ISIS broadcast said, “We say to the protector of the Cross, America, that what is coming will be more bitter and calamitous. The soldiers of the Islamic State will show you what will harm you, Allah willing. Tomorrow draws near."

Meanwhile, Homeland Security Today reported, ISIS, jihadist groups may have inspired “hundreds, maybe thousands” in the US, and that directed attacks in the US are believed planned by ISIS followers.

According to MEMRI’s Jihad and Terrorism Threat Monitor (JTTM), the foreword of the current issue of Dabiq “glorifies the attack by Soofi and Simpson, noting, ‘Their determination to support the cause of Allah and punish those who insult the Prophet (sallahu ‘alayhi wa sallam) should serve as inspiration to those residing in the lands of the crusaders who are still hesitant to perform their duty.’”

The writer of the foreward goes on to state that, “Those men who have read the countless ayat and ahadith on the virtues of jihad and have made sincere dua [prayer] to Allah asking Him for shahadah [martyrdom] but have yet to act, should consider that Allah will not grant them their dua until they take a step towards this noble duty."

The foreward further noted that it is also possible to achieve martyrdom even without emigrating to Islamic lands. It said, "Many of those who attained shahādah fighting the crusaders in their own lands had first taken steps to make hijrah to the lands of jihād. These preparatory steps were enough to demonstrate their sincerity, so they were granted shahādah without facing the difficulties of hijrah” [emigrating to Islamic lands]."

Continuing, the article stated that, “As the crusaders continue to reveal their intense hatred and animosity towards Islam through their relentless bombing and drone campaigns on the Islamic State, a new breed of crusader continues shedding light on the extent of their hatred towards the religion of truth. This breed of crusader aims to do nothing more than to anger the Muslims by mocking and ridiculing the best of creation, the Prophet Muhammad Ibn ‘Abdillāh (sallallāhu ‘alayhi wa sallam), under the pretext of defending the idol of ‘freedom of speech.’”

“Yet, such brazen attacks on the honor of the Prophet (sallallāhu ‘alayhi wa sallam), rather than deterring or disheartening the Muslims, serve as further incitement, spurring them into confronting the forces of kufr with whatever means they have available. Such was the case with Elton Simpson and Nadir Soofi, two brave men who took it upon themselves to remind the enemies of Allah and His Messenger (sallallāhu ‘alayhi wa sallam) that as long as they choose to wage war on Islam, they would have no peace and security, would not be able to walk their own streets without looking over their shoulders, and would not be able to make public appearances without being surrounding by a legion of bodyguards and security personnel,” stated the forward to the latest issue of ISIS’s magazine.

“The two lions of the Khilāfah arrived at the Curtis Culwell Center in Garland, Texas three weeks ago during a convention that featured a competition to draw the Prophet (sallallāhu ‘alayhi wa sallam) in an attempt to mock and ridicule him,” the article stated, noting that, “The two mujāhidīn came armed and ready to wage war, ignited a gun battle with the policemen guarding the center, and attained a noble shahādah in pursuit of vengeance for the honor of our beloved Prophet (sallallāhu ‘alayhi wa sallam).”

“Their determination to support the cause of Allah and punish those who insult the Prophet (sallallāhu ‘alayhi wa sallam) should serve as inspiration to those residing in the lands of the crusaders who are still hesitant to perform their duty,” the article. Those men who have read the countless āyāt and ahādīth on the virtues of jihād and have made sincere du’ā’ to Allah asking Him for shahādah but have yet to act, should consider that Allah will not grant them their du’ā’ until they take a step towards this noble duty,” the article continued, adding, “{And if they had intended to go forth, they would have prepared for it [some] preparation. But Allah disliked their being sent, so He kept them back, and they were told, ‘Remain [behind] with those who remain’} [At-Tawbah: 46].”

Dabiq’s glorification of the Texas attack further stated that, “Many of those who attained shahādah fighting the crusaders in their own lands had first taken steps to make hijrah to the lands of jihād. These preparatory steps were enough to demonstrate their sincerity, so they were granted shahādah without facing the difficulties of hijrah.”

“As for those who continue to suffer from the disease of being indifferent towards the obligations of hijrah, jihād and bay’ah,” the article continued, “so much so that they see nothing wrong with residing amongst, and paying taxes to, the very crusaders who belittle the Sharī’ah on their news and entertainment programs, who arm the secularists and Rawāfid in Muslim lands, who imprison and torture Muslim men and women, and on top of all who burn the Qur’an and mock the Prophet (sallallāhu ‘alayhi wa sallam), then let them prepare their flimsy excuses for the angels of death {Indeed, those whom the angels take [in death] while wronging themselves – [the angels] will say, ‘In what [condition] were you?’ They will say, ‘We were oppressed in the land.’ The angels will say, ‘Was not the earth of Allah spacious [enough] for you to emigrate therein?’ For those, their refuge is Hell – and evil it is as a destination} [AnNisā’: 97].”

“The hypocrites will sit back, the true men will step forward, and the kuffār will have no peace and no security … May Allah accept our two brothers amongst the leadersof the shuhadā’ in Jannah.”