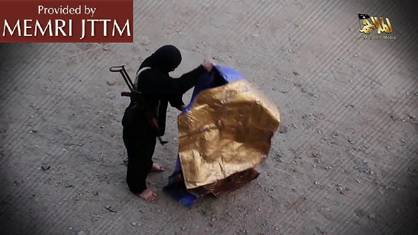 Indeed, intelligence and Al Qaeda’s own disclosures clearly show they are devoting considerable time and resources toward developing a variety of countermeasures against drones, especially US Reapers that have taken out  many top Al Qaeda leaders and operatives.

Released on the AQAP-affiliated Twitter account @ABMOGA, the 16-minute video “focuses on the camera system used in drones, and ways to combat it,” according to the Middle East Media Research Institute (MEMRI).

Indeed, the AQAP produced video discusses how the daytime and infrared camera systems used on drones works by detecting changes in surface temperature.

“The video therefore suggests for the mujahideen to find ways to hide their body heat,” MEMRI said. “In that regard, it offers a homemade insulating cover that is made especially for that purpose. The video also demonstrates the steps and materials needed to build one.”

What AQAP proposes is a 4×2-meter piece of tarp folded in half with aluminum foil glued in the middle. The aluminum presumably acts like a heat barrier, keeping the fighter’s body heat from being detected by the drone camera system, AQAP tells its combatants.

“The video also offers various ways to enhance the insulating cover by attaching various items to it, like small tree branches, as well as by painting it in order to increase its camouflage qualities,” MEMRI said, adding the video also shows how an insulating cover is used, noting that it is light, making it easy to be carried.

Additionally, the video describes techniques for hiding from drones while traveling in a vehicle. For example, AQAP suggested driving in unidentified cars, or, when a drone is spotted, to drive near buildings or in bushy areas to hide from its cameras.

MEMRI Executive Director Steven Stalinsky and MEMRI chief editor R. Sosnow, stated in a recent report they jointly penned — and which will appear in the upcoming Dec./Jan. issue of Homeland Security Today featuring a special section on drone issues — that, “Since the US implemented a strategy of killing Al Qaeda leaders and members with drones, Al Qaeda has, in response, invested major efforts in attempts to hack into drones and to stop them by other technological means. Today, the use of drones is of strategic cyber importance not only to Al Qaeda, but ISIS and other jihadi organizations in Syria, Iraq, Yemen, Somalia, North Africa and elsewhere.”

Other projects in the works, DIA said, include the development of small radio-controlled aircraft insurgents apparently saw as having potential for monitoring the flight patterns of US drones.