China and Russia at center of new defense strategy 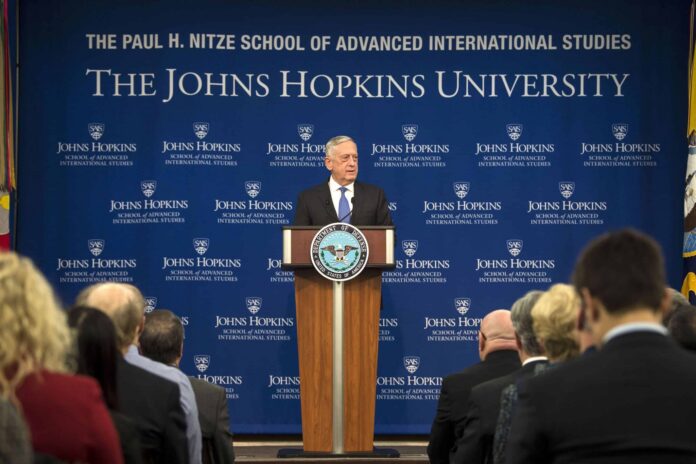 Mattis unveiled the unclassified pages of the strategy at the Johns Hopkins’ School of Advanced International Studies, and threats from other countries were high on the agenda. The document highlights the advances that China has made in the South China Sea, and it says the country is ” using predatory economics to intimidate its neighbors”

It points to Russia’s violation of borders, and says it ” pursues veto power over the economic, diplomatic, and security decisions of its neighbors.”

Mattis says the defense strategy will have three distinct elements; building a more lethal force through modernization, forging strong alliances and cutting back against bureaucracy. The strategy, the first to be released in a decade, emphasizes the importance of space and cyberspace as tools of warfare, as well as prioritizing the modernization of the nuclear triad.

It pinpoints Russia and China as the US’s main adversaries, but also recognizes that DoD must address North Korea, Iran and the threat of terrorism. It states that “Rogue regimes such as North Korea and Iran are destabilizing regions through their pursuit of nuclear
weapons or sponsorship of terrorism.”

The defense strategy concludes by saying that: “we must use creative approaches, make sustained investment and be disciplined in execution to field a Joint Force that is fit for our time.” The document points out that China and Russia have spent the last 25 years studying America, and its way of war, and the anti-access methods both countries have developed need to be countered.

In a DoD press release announcing the strategy, deputy assistant secretary of defense for strategy and force development, Eldridge A Colby, described it as: “not a strategy of confrontation, but it is strategy that recognizes the reality of competition.”