PERSPECTIVE: Future of the Internet Depends on Global Adoption of IPv6 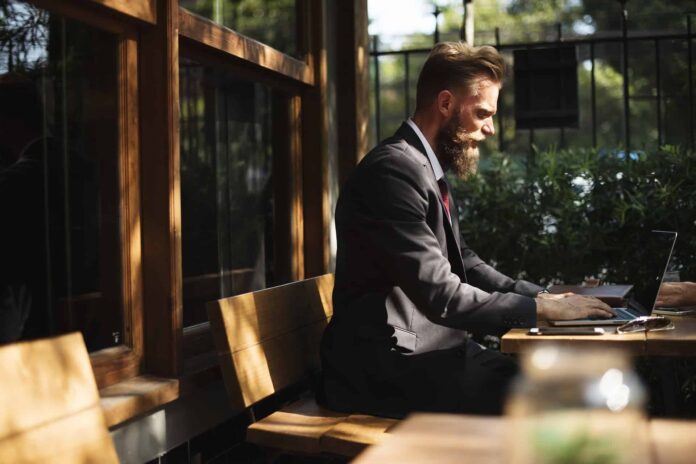 In the era of Internet of Things (IoT) and blockchain, it has become increasingly obvious that without the extensive global adoption and successful deployment of IPv6 as the primary version of the Internet Protocol (IP), if not the only version of IP completely replacing IPv4, not only the future deployment and growth of IoT and other technological innovations relying on the support of the Internet are impossible, but the future of the Internet itself is at stake.

As I stated in a related article published two years ago, there are five main reasons why we must adopt and securely deploy IPv6 globally:

The good news is that this is finally happening right now at an amazingly rapid speed worldwide. Based on the IPv6 Adoption Visualization report provided by Akamai, currently Belgium is leading the world in IPv6 deployment with a 46.4 percent adoption rate and the United States is ranked No. 2 in its IPv6 deployment effort with an adoption rate of 40.4 percent, followed by India (36.6 percent), Greece (32.2 percent), and Germany (25.5 percent). These numbers are increasing and changing constantly.

Similarly, according to the 2017 Internet Society State of IPv6 Deployment report, mobile wireless is rapidly becoming an IPv6 only market with 90 percent of current Verizon Wireless mobile users already using IPv6. Other mobile carriers such as T-Mobile are in the process of turning off IPv4. Companies like Facebook, Microsoft and LinkedIn are either planning or in the process of turning off IPv4 internally in their data centers. Google has also adopted similar IPv6 only policy for its data centers. In addition, 128 (25.6 percent) of the top 500 websites are currently supporting IPv6, according to Alexa. 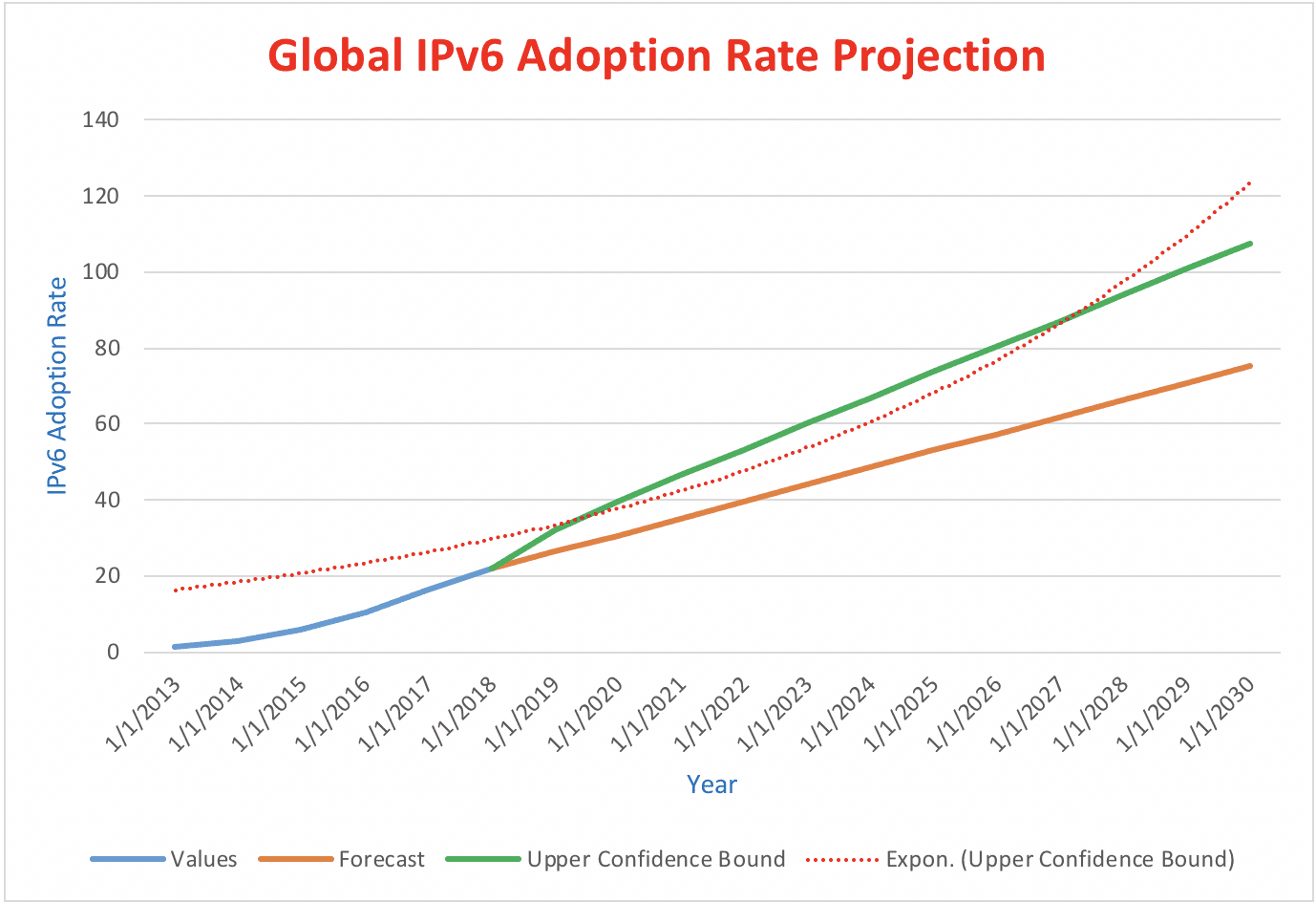 Obviously, anytime someone makes a predication about something, there is always a chance of making a mistake, if not completely disastrous, with a lot of credibilities on the line, including the integrity of the data and the tools used. Nevertheless, information like this is very important and useful, especially when such kind of projections and forecasts are not readily available.

With the current global depletion of IPv4 addresses and the increasing cost of using IPv4, the economic impact on supporting IPv4 has been significant. Since Sept. 24, 2015, there are no more free IPv4 addresses to be allocated in North America by ARIN. For example, a Class C IPv4 address (/24) with 254 available IP addresses used to be free with registration with ARIN, and now will cost more than $4,000 – if you could still find one from one of the so-called IPv4 brokers. If you need a much larger block of IPv4 addresses, such as Class A (/8) or Class B (/16) IPv4 addresses, you would have to pay much more – provided you could find one in the first place.

It looks like the extra cost of doing business using IPv4 finally has its impact on many of the companies’ decision to embrace IPv6: instead of paying a premium to buy the IPv4 addresses, why not just use the IPv6 for free? The answer seems to be very simple. And this is the sixth reason why we must adopt and deploy IPv6 now!

Over two months ago, I attended a blockchain seminar in D.C. and one of the panelists told the audience that the blockchain “is huge and it is bigger than the Internet!” I had to correct the panelist during the Q&A session that the blockchain, as a distributed ledger, will rely on the Internet to connect its database across the networks for synchronization. No matter how big or hot blockchain may be currently, without the Internet there is no database synchronization for the blockchain; thus, there is no blockchain. Similarly, at the GITEC summit in April, the speaker on the subject of smart vehicles agreed that if the smart cars do not have the native support for IPv6, they will never be able to drive freely outside of the controlled lab environment in the real world, let alone in mass production as using IPv4 Natting (Network Address Translation) will not work for the smart cars traveling on the highway crossing the cities while simultaneously communicating with all kinds of control towers, satellites, and among the smart cars.

Consequently, it is an understatement that the future growth and successful deployment of IoT and similar emerging technologies cannot be achieved without the successful global adoption and secure deployment of IPv6, without which there is no future of the Internet of Things nor any other new technologies and innovations that will depend upon the support from the Internet.

IPv6 is the future of the Internet!

Disclaimer: The views presented are only personal opinions and they do not necessarily represent those of the U.S. Government.

The views expressed here are the writer’s and are not necessarily endorsed by Homeland Security Today, which welcomes a broad range of viewpoints in support of securing our homeland. To submit a piece for consideration, email HSTodayMag@gtscoalition.com. Oureditorial guidelines can be found here.

Charles Sun
Charles Sun is a columnist with HSToday focusing on security and implementation of IPv6. He is a highly innovative, dynamic, and experienced Information and Communication Technologies (ICT) executive with more than twenty-five years’ extensive professional and managerial experience in both the public and private sectors, having routinely and consistently provided the state of the art, innovative, and cutting edge ICT solutions and project management with a proactive vision and common sense to many organizations in both the public and private sectors. As the subject matter expert (SME) in Cloud Computing, SDN, NFV, Data Center Virtualization, IPv6, IoT, large enterprise & campus computer systems and converged voice, video, and data networks design, planning, testing, implementation, installation, and IT project management, Mr. Sun has previously served as Director of IT Engineering and Operations at the Export-Import Bank of the United States and Senior Advisor for Emerging Technologies at the U.S. Census Bureau of the U.S. Department of Commerce. He also served as LAN/WAN Network Manager and Branch Chief at the U.S. Census Bureau of the U.S. Department of Commerce and U.S. Bureau of Labor Statistics of U.S. Department of Labor. Prior to his work in the U. S. federal government, Mr. Sun previously worked as a senior network engineer and principal network consultant at the University of Maryland (UMD and UMUC), Northrop Grumman Mission Systems, U. S. National Library of Medicine, AOL Time Warner, and Georgetown University. He also served as a Senior Technical Officer at Startec Global Communications and Network Manager/IT Manager at the National Museums of Asian Art of Smithsonian Institution and other non-profit organizations in the United States. As the recipient of graduate scholarships, Mr. Sun earned a Master of Arts degree in International Affairs from Ohio University. He also completed the courses required for the Master of Public Administration (MPA) program at Ohio University