GAO: DHS Plans Are Urgently Needed to Address Identified Challenges Before the 2020 Elections

The Department of Homeland Security’s Cybersecurity and Infrastructure Security Agency (CISA) has helped state and local election officials secure online voter registration systems, voting machines, and other election infrastructure since 2017. Elections officials interviewed by the Government Accountability Office in 7 of 8 states said they were very satisfied with CISA’s support.

Election primaries begin in February. However, CISA has not yet completed its strategic and operations plans to help state and local officials safeguard the 2020 elections or documented how it will address prior challenges. GAO made 3 recommendations, including that DHS urgently finalize its plans.

In August 2019, the CISA Director identified election security as one of the agency’s top five operational priorities. CISA security advisors, who are located throughout the country, consult with state and local election officials and identify voluntary, no cost services that CISA can provide. According to CISA, as of November 2019, 24 cybersecurity advisors and 100 protective security advisors perform and coordinate cyber and physical security assessments for the 16 critical infrastructure sectors, including the Election Infrastructure Subsector. Technical teams at CISA headquarters generally provide the services, once requested. 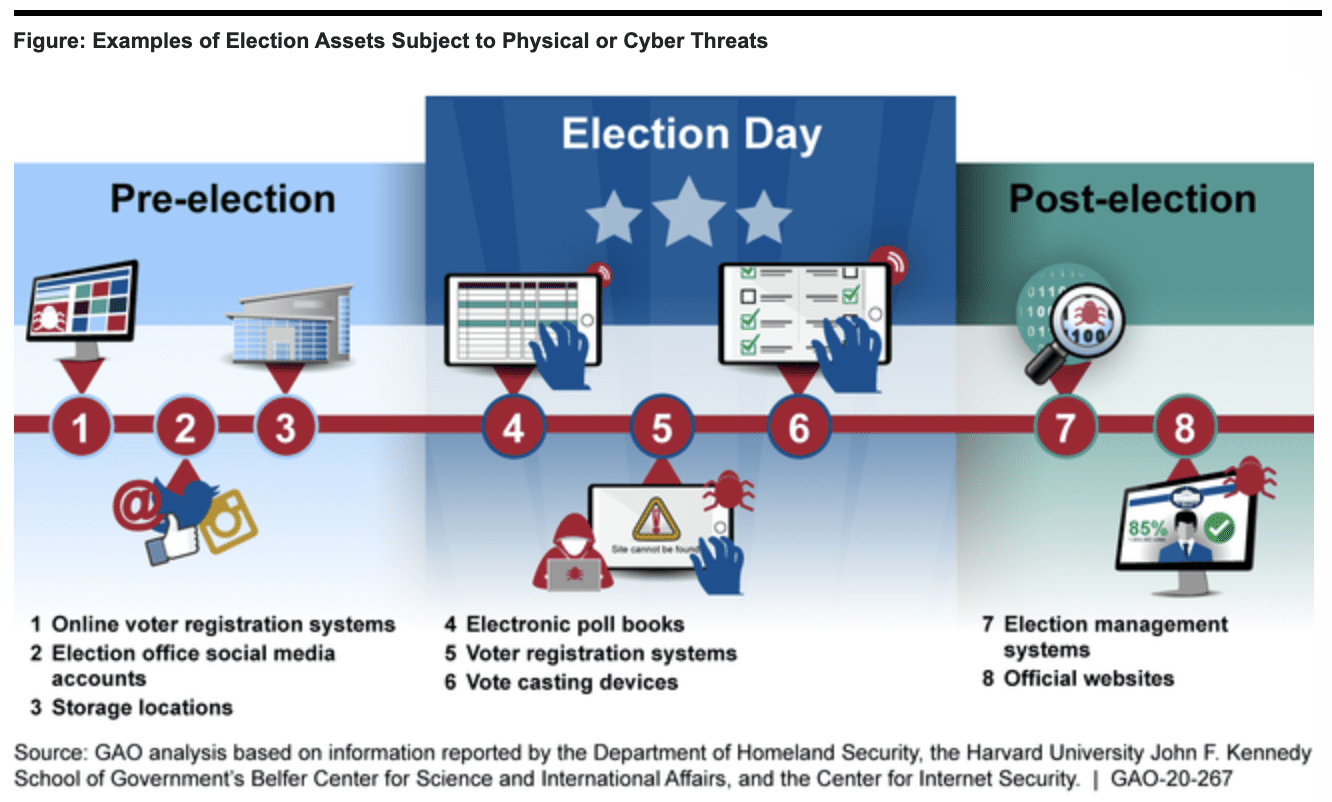 To further assist state and local election officials, CISA conducted two exercises simulating real-world events and risks facing election infrastructure in August 2018 and June 2019. According to CISA, the 2019 exercise included 47 states and the District of Columbia. In addition, CISA has funded the Election Infrastructure Information Sharing and Analysis Center (EI-ISAC). According to CISA officials, the EI-ISAC is the primary mechanism for exchanging information about threats and vulnerabilities throughout the election community. The EI-ISAC director reported that, as of November 2019, its members included 50 states, the District of Columbia, and 2,267 local election jurisdictions, an increase from 1,384 local jurisdictions that were members in 2018. As a result of its efforts, CISA has provided a variety of services to states and local election jurisdictions in the past 2 years.

To guide its support to states and local election jurisdictions for the 2020 elections, CISA reported that it is developing strategic and operations plans. CISA intended to finalize them by January 2020, but has faced challenges in its planning efforts due to a reorganization within CISA, among other things. In the absence of completed plans, CISA is not well-positioned to execute a nationwide strategy for securing election infrastructure prior to the start of the 2020 election cycle. Further, CISA’s operations plan may not fully address all aspects outlined in its strategic plan, when finalized. Specifically, according to CISA officials, the operations plan is expected to identify organizational functions, processes, and resources for certain elements of two of the four strategic plan’s lines of effort—protecting election infrastructure, and sharing intelligence and identifying threats. CISA officials stated that CISA was unlikely to develop additional operations plans for the other two lines of effort—providing security assistance to political campaigns, and raising public awareness on foreign influence threats and building resilience.

Moreover, CISA has not developed plans for how it will address challenges, such as concerns about incident response, identified in two reviews—one conducted by CISA and the other done by an external entity under contract—of the agency’s 2018 election security assistance. Challenges that the reviews identified include:

Although CISA officials said that the challenges identified in the reviews have informed their strategic and operational planning, without finalized plans it is unknown whether CISA will address these challenges.