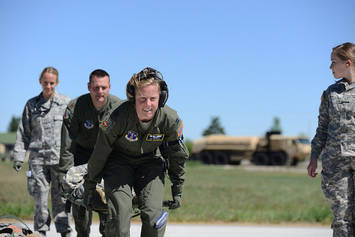 The capabilities of the Minnesota National Guard’s 109th Aeromedical Squadron were recently put to the test during Vigilant Guard, a state-wide exercise to improve the state’s military and civilian responders’ ability to work together during a natural disaster.

During natural disasters or other state emergencies, saving time saves lives. If civilian capabilities are overwhelmed, National Guard and other military resources can be called upon to move critical patients from remote scenes to distant medical facilities quickly.

"Our role in the exercise is to stabilize and transport patients from the field to higher echelons of care," said 109th AES Director of Operations Maj. Jeramy Browning. "Our highly-trained flight medics care for sick and wounded patients, maintain their health and well-being aboard the plane, getting them to the definitive care they need. Being able to participate in this exercise helps us refresh protocol and procedures of working with civil authorities, sister services as well as state and local entities."

During the exercise, the aircrew and medical team of the 109th transported simulated patients from the 133rd Airlift Wing in St. Paul to Camp Ripley, Kansas. On arrival, the team worked with other National Guard medical personnel to transport additional mock patients from UH-60 Blackhawk helicopters to the unit’s C-130H Hercules aircraft to simulate the continuation of care during a state emergency.

"This exercise gives us a great opportunity to improve our interoperability with the Army Guard, civilian healthcare providers and emergency response personnel," said Aeromedical Evacuation Technician Staff Sgt. Britt Monio. "In the event of a future, real world scenario like this, we know that we will be well prepared and the incident command system should run effectively, so that patients get the medical care they need in the fastest and safest way possible."

Using volunteers portraying victims, the 109thAirmen trained on a variety of in-flight processes and procedures, including litter carries across a flight line, checking and maintaining vital signs, and maintaining the overall care of patients in flight.

"Every single person in our squadron loves what they do," Browning said. "I’m so proud of my unit and the great work they do – whether it’s on base during a drill weekend or they are flying around the state or world helping people with their outstanding level of care."