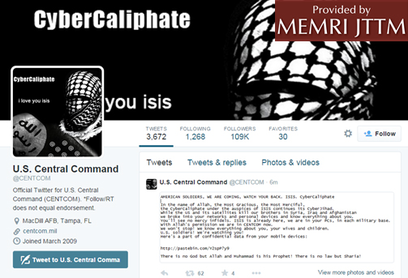 The Newsweek Twitter account, @Newsweek, was hacked by a group calling itself Cyber Caliphate on February 10. The group claimed to be affiliated with the Islamic State (ISIS) and previously hacked @Centcom, the Twitter account of the United States Central Command (USCENTCOM). Newsweek said its account remained hacked for 14 minutes until 10:59 a.m., when Twitter’s support team regained control of the account at the publication’s request.

"We can confirm that Newsweek’s Twitter account was hacked this morning, and have since regained control of the account," Newsweek managing editor Kira Bindrim said in a statement. "We apologize to our readers for anything offensive that might have been sent from our account during that period, and are working to strengthen our newsroom security measures going forward."

During the hack, the @Newsweek account’s profile picture and banner were changed to images of a masked man and the Black Standard flag, along with the message, "Je su IS IS." Newsweek said the group tweeted out offensive messages threatening Michelle Obama and praising cyber jihad. Images the hackers claimed were confidential were also tweeted, specifically from the Defense Cyber Investigations Training Academy and the Pentagon. The FBI is investigating the attack.

The same day, the website of the International Business Times and the official Twitter account of Latin Times were also hacked, apparently by the same group that targeted Newsweek. All three publications are owned by IBT Media.

Ian Amit, the vice president of social media risk management specialist ZeroFOX said that it is unfortunate that news outlets and organizations with prominent publicly facing social media accounts are still negligent when it comes to securing their profiles. The Newsweek incident featured the same MO as previous attacks such as the one on USCENTCOM in which the social media account was compromised, most likely through brute-force guessing the password, and then plastered with pro-IS propaganda.

"As such we strongly recommend organizations to perform a risk assessment on their social media presence, which should cover not only ‘brand’ accounts, but also accounts for key individuals that have a high public exposure, and/or access to sensitive information,” Amit said.

“It is notable that the Newsweek team managed to regain access to their account fairly quickly and restore it to its previous state (while publishing a news article about it)," Amit said. "However, we would expect that by now that the incident response procedures related to such incidents would be polished, and more importantly, the controls to thwart attacks like this would be created in the first place.”

Does ISIS have the expertise and materials to launch a critical cyber attack on the US or another nation’s critical infrastructure? At this stage, probably not.

The activities of the so-called Cyber Caliphate to date indicate aspirational goals rather than operational means and the group’s tendency to announce its intentions removes any element of surprise from a future attack, like a sniper signposting his hideout.

There is no doubt, however, that a future aim is to create significant damage via a cyber attack. The US and its allies must ensure that they stay onestep ahead to guard against such a threat becoming a reality.