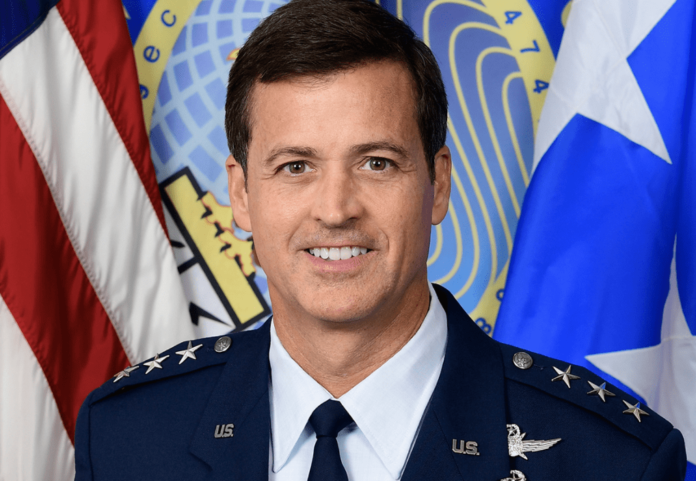 Army Gen. Paul M. Nakasone, commander of USCYBERCOM and director of the National Security Agency, presided over the small ceremony with the families of Moore and Myers.

“I first met him [Moore] when he was on the Joint Staff and then worked closely with him when became the USCYBERCOM J3 and I was commanding Army Cyber,” said Nakasone. “As the director of operations, I knew I could trust him to always get the job done. His responsibilities included planning, coordinating, integrating, and conducting mission command of full-spectrum Department of Defense Information Network defensive, offensive, intelligence, surveillance, and reconnaissance operations. It’s a tough job. It takes someone with grit and focus, and Tuna has that in spades.”

Moore, who hails from Charleston, S.C., is a graduate of the United States Air Force academy and has been an F-16 fighter pilot, instructor pilot, weapons officer, and forward air controller and instructor, with more than 3,000 hours in the F-16 and more than 640 hours of combat time.

“It has been my pleasure to serve as the U.S. Cyber Command Director of Operations J3 for the past three years,” said Moore. “To have the opportunity to continue to serve on the Cyber Command team and in close partnership with NSA is very humbling and exciting.”

The outgoing deputy commander, Myers, is moving on to take command of the United States Tenth Fleet, also known as Fleet Cyber.

“As the J5, chief of staff, and then the deputy commander, Ross has demonstrated his appreciation for partnership as a foundational leadership principle,” said Nakasone. “He brings out the best in people.”

“As I turnover DCOM duties to my good friend Lt Gen Tuna Moore, please allow me to say “Thank You” to all the men and women of USCYBERCOM and our NSA Shipmates,” said Myers.  “It has been my personal honor and privilege to serve alongside of you during the past two and a half years.  And I am so proud of what you have accomplished and what you are going to accomplish under General Nakasone’s leadership and guidance.  You are a true a global force.  There is nothing you and NSA cannot accomplish together. Godspeed and stay healthy.”