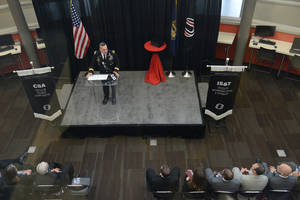 Ten US Strategic Command employees completed the USSTRATCOM Strategic Leadership Fellows Program as part of a joint endeavor with the University of Nebraska, USSTRATCOM announced. The program is designed to enhance the management skills and technical expertise of civilians as they progress to strategic supervisory roles.

USSTRATCOM senior officials, civilian personnel and academic professionals recognized the graduating fellows during a ceremony at the University of Nebraska’s Peter Kiewit Institute in Omaha, May 1.

The fellowship program, launched in March 2014, is part of USSTRATCOM’s ongoing effort to build enduring relationships with partner organizations, such as the University of Nebraska’s National Strategic Research Institute, from the private sector, academia and allied nations.

“During their 13 weeks at the University of Nebraska Omaha, in a classroom-based, hands-on environment, the fellows learned from university national security and defense experts and honed their skills in team building, collaboration management, data‐driven decision making and project management,” USSTRATCOM said.

“The fellows were nominated by their leaders and selected because we saw in them the potential to grow and make an impact not only to the command, but to the community,” said USSTRATCOM chief of staff Army Maj. Gen. John Uberti in his keynote speech at the ceremony for the second class of graduates. “[They] have not only gained knowledge, but they’ve grown as thinkers and leaders; and we’re here to celebrate their success.”

Uberti, unanimously voted by the class as their most impactful guest lecturer, also challenged the fellows to bring the “fresh perspectives” they and apply them in their day to day work approach and their expanding roles back at USSTRATCOM.

“We know USSTRATCOM must remain a high-performing organization in an environment which is increasingly volatile, uncertain, complex and ambiguous,” he said. “We’re counting on you to help us lead through this time of change. As Yogi Berra said, ‘The future ain’t what it used to be.’”