COLUMN: Disaster Is Coming, and Camp Fire Lessons Can Help You Manage and Survive

HSToday is proud to announce a multi-part series from Emmy award winning director Christopher Allan Smith, a survivor of the Camp Fire in Paradise, California, and documentary filmmaker. Following the fire, Smith took his talents and devoted them to helping others learn from the tragedy on the Paradise Ridge, and the impact of disaster on families, communities and the first responders and disaster planners whose responsibility it is to take these lessons into the future. This series, Lessons Learned from the Camp Fire, describes how preparedness plays out in reality: from running for your life away from the danger to emergency finances to the aftermath, told only like a survivor could share. HSToday presents this series to bring a voice to the victims of disaster and add some personal texture and experience to the impact of disasters, terrorism, and other tragic acts of violence.

In our lives, how obvious is the line between where the influence of our personal decisions ebbs and eddies and undertows of larger trends holds sway?

If you’re like me, you want to believe everything important falls under your influence. And if you’re like me, somewhere in your heart you know that notion is more an article more of faith than reason or experience.

That morning, 10 miles from my front door in Paradise, California, a poorly maintained power line owned by Pacific Gas & Electric Co. arced, dropping molten metal into the brush below.

I was rousing my younger son and getting ready to drive him to high school in Chico, ignorant of the turn my life was taking. We saw smoke, like we had many times before. We assumed it was another of the brush fires familiar to those of us living on a forested ridge.

The power line ran across a side ravine of the Feather River Canyon. That ravine — steep, rugged, accessible only on foot — had burned in a forest fire 10 years before. So on that morning, November 8, 2018, the ravine was choked with the detritus of old fire and a decade’s worth of dense growth, leeched of moisture during a long California summer. In fact, the brush was the most parched it would be all year. November 8 was one of the final dry days before the winter rains began about a week later.

Every day between roughly 2 a.m. and 10 a.m., a howling wind pours through the Jarbo Gap of the Feather River Canyon. That day, it met flame, fanning and lifting the embers in the brush beneath that failed power line.

It was also a nightmare that had haunted more than a few citizens and leaders on the Paradise Ridge. While we lived in pleasant obscurity in that sleepy corner of Butte County, for two decades we had been preparing for a big fire. By most educated accounts, we were among the best in class for a community of our size and situation. That’s a bittersweet accolade from the National Institute of Standards and Technology (NIST), whose factual reports help decision makers in government, private and public organizations. Their report, A Case Study of the Camp Fire – Fire Progression Timeline, is the best, most accurate I’ve come across (and I’ve looked), but it’s hardly comforting:

“This study has identified that Butte County and the Town of Paradise were well prepared to respond to a [Wildland-Urban Interface] fire, that the Camp Fire grew and spread rapidly and that multiple factors contributed to the rapid growth and spread of the Camp Fire… The Camp Fire became the most destructive and deadly fire in California history, with over 18 000 destroyed structures, 700 damaged structures, and 85 fatalities.”

Lessons at a High Price

Living through something like the Camp Fire is a deeply human experience. My family made it out alive while 85 of our neighbors did not. Our house, along with the homes of 25,000 other people, was reduced to ash and hardened streams of melted metal. We thought – the town thought – we were prepared. And in a way, we were. We were prepared for wildfires as we had known them. But the Camp Fire was not that.

That is what this series is about.

The depth of human knowledge lies in trial and error, sweet and bitter experience, triumphs and calamities. Everything that makes humanity more secure and more civil comes from the lessons we and our forebears have learned.

So I’m here in this series with the lessons we’ve learned on the Paradise Ridge. We took to heart theory and book learning as we prepared for wildfire, and then the Camp Fire taught us more than we could have imagined. By sharing these lessons, we hope to help other communities prepare for what awaits. We’ve broken them into four parts: preparation, response, communication, and recovery. In this first installment, we’ll cover preparation.

This series is about more than fighting to live another day. It’s about coming out on the other side having saved what’s most dear, be it those close to you, the business you’ve built or the organization you’ve grown. We hope these lessons are as valuable to a family as they are to a government agency. This is about saving lives and saving legacies.

Preparation: Battening Down Your Hatches

Lesson 1: Accept that a Disaster Will Happen to You 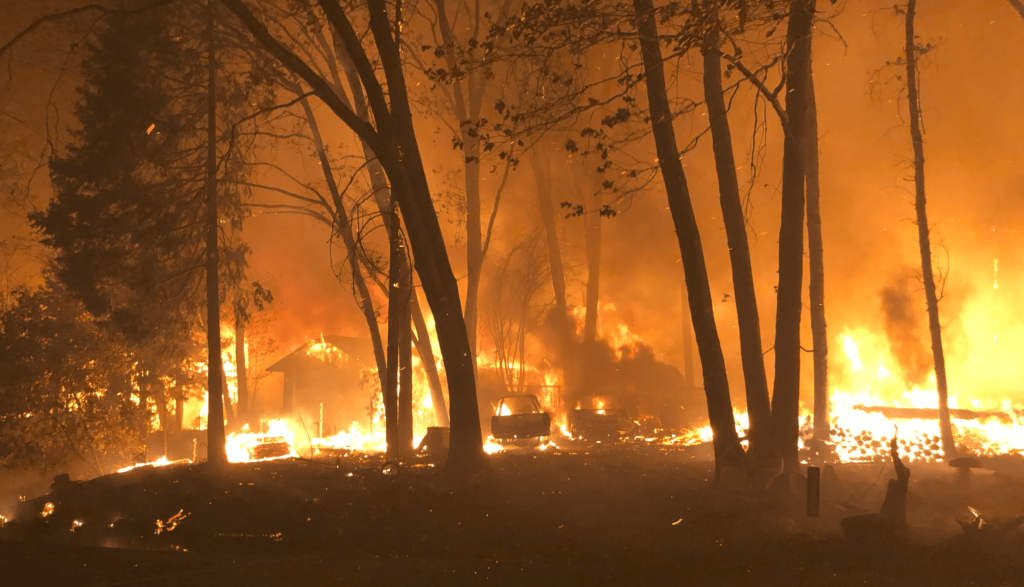 Of all the lessons the Camp Fire taught me, this one was the hardest for me to get most  people to accept: a disaster will happen to you.

It’s understandable. Before the fire, I suffered from the same psychological block all my life. I could see disasters consume the lives of people around the world, know that I am myself a person, and still fail to grasp, deep down, that I was one of those people whose lives could be devastated by disaster.

But then COVID-19 did the convincing for me. Now, just about everyone on Earth knows and has experienced how the best-laid plans (along with the worst and the mediocre plans, too) can be upended by fates outside our control.

Consider this list of disasters from the American Red Cross:

While an earthquake or tornado might be unthinkable where you live, how many things on this list have impacted the lives of those 10 miles from you? How many people do you know who have suffered from one of these?

The first step in preparation is to understand that it is not just a thought experiment. Take an honest look at what could endanger your community. Build a risk matrix. Has there ever been a recorded volcano eruption? No? Well, probably don’t dedicate much time and money to preparing for that. But if seven tornadoes have carved through town in the last century, you know where your focus should be.

Think about what dangers lurk for you and get moving.

One of the queer threads through eyewitness descriptions of dramatic events – the JFK assassination, the September 11 attacks, our own initial impressions of the Camp Fire – is that what is obvious to every dispassionate camera or later historian is not immediately clear to those living through the moment.

Many ear witnesses in the JFK assassination wrote off the initial shots as fire crackers, despite what they saw. Many in Manhattan lingered downtown even after it was clear that two of the biggest buildings on Earth were being consumed by an uncontrollable fire.

In the Camp Fire, many of us initially felt something like, “I’ve seen wildfire after wildfire, and this one will blow over.” Even while smoke filled the streets like London fog. Even while the sky turned black as midnight.

It wasn’t until I heard propane tanks exploding that I was shaken out of my complacency.

Even when we get all the information we need to act from our eyes and ears, we may take too long to process it. To respect reality is to move faster.

Lesson 3: Make a Plan that Works for You

Dealing with a disaster is not the kind of thing you can throw together on the fly. A lot of things, some legit lethal things, will be happening in quick succession. When you think about what you need to do before the disaster hits and make a plan, you have steps to follow when your brain might still be playing catch-up on the reality before you.

Ten years before the Camp Fire, the town of Paradise had nearly burned. So we were keenly aware of the danger and the need to think ahead. One of the big initiatives pushed by local officials and the fire safe council and distributed in local schools is called Ready Set Go.

Be Ready–Think about what you need, think about where you’ll go, and think about how to get there. Get a plan. What important documents do you need? Where are they? What medicine do you need? What items, like family photos, are irreplaceable if you lose your home? We used what we called Go Boxes. Most of our essentials were kept in easy-to-grab, plastic cases that could be packed quickly.

Get Set–Be alert to what’s going on around you. More on this in Lesson 6 next week.

Go–Act early. When you’ve gathered your essentials (important documents, pets, medicine, etc.) get out. As more than a few firefighters have told me, if it occurs to you that it might be a good idea to leave, chances are very good that the safest time to leave has already passed. Go.

Lesson 4: Know How to Evacuate

When I returned home from taking my son to high school at 8:30 a.m. on November 8, 2018, my family, my neighbors and my town were prepared for wildfire. We’d been planning for years. But not for what was coming.

By then, the sky above my house was the color of oak bark and getting darker. In previous fire scares, we had hours to pack up and track down what was needed. As I packed that day with my eldest son, there was not just one fire in Paradise. There were dozens.

There were essentially four routes off the Paradise Ridge that day. Three of them had experienced burn-overs, according to my friends and the NIST report. That means that at certain points, people had to drive through fire to use them. For some, it would take 7 hours to get to safety.

As part of our preparation, with credit to all the lessons here, we knew where we would go. When we heard the explosions, we decided to go. A half-hour after arriving home for what would be the last time, my eldest and I got in our car.

Despite seeing the signs, despite hearing the distant roar of flames, denial still lingered. I still thought I would be back in a day or so and my home would be there. So as we drove out, I did not even look back. I left like you do for work, eyes already on the day ahead because you know you will return.

Christopher Allan Smith
An Emmy-Award Winning documentarian, Christopher Allan Smith lived in Paradise, California, with his family until the Camp Fire consumed his home in November 2018. Since then, he has been conducting interviews and research into the history of the fire as well as the lessons taken by first responders, civilians, government officials and private disaster planners, with an eye toward producing multiple projects based on those lessons. He also acted as a Field Producer for Ron Howard’s REBUILDING PARADISE as well as the writer/director of the PBS broadcast documentary A HIGH AND AWFUL PRICE: LESSONS LEARNED FROM THE CAMP FIRE. He is the owner and founder of RocketSpots.tv, a video production company that produces a wide range of documentary, promotional and online projects.

Leading with Character: An Oasis of Civility