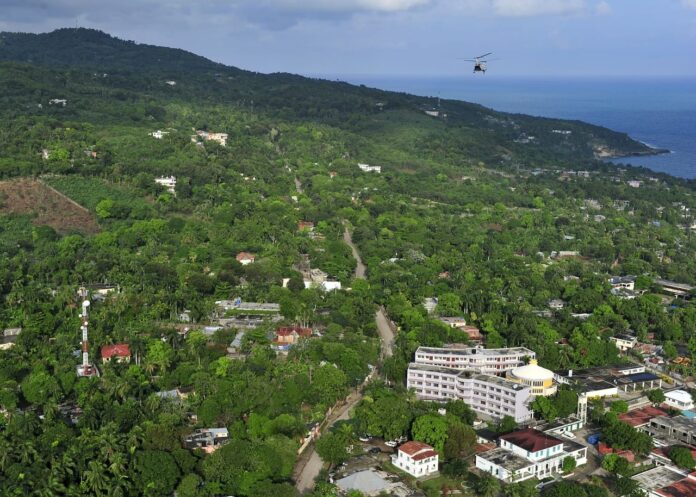 It’s now recognized that environmental issues can be critical to national security (Ref 1). Sustainable use of natural resources is essential to support livelihoods in developing countries. Failure of natural resources to support communities can be a root cause of national fear and insecurity, as is now being seen in the case of Haiti. The demonstrations in Haiti have practically crippled and paralyzed commerce. Schools and businesses have been closed for over six weeks. Some foreign businesses have closed their operations permanently in Haiti. Sadly, lives have been lost in many confrontations related to these events. Some estimates show that the loss in economics could require as much monetary recovery as the period after the 2010 earthquake in Haiti. While the reasons for the demonstrations are numerous, among them are environmental degradation, food shortages and lack of clean drinking water, as reported by the Washington Post (Ref 2). The waves of immigration are tied to inadequate or unsustainable harvesting of natural resources, as well as land degradation.

Haiti has had significant soil degradation, mostly as a result of deforestation. The trees are cut for charcoal. The deforestation has resulted in intensified mudslides during hurricanes, which results in more deaths than expected. Silt, which is the fine agricultural rich soil, erodes to clog critical infrastructure such as dams, which provide water and electricity, and also clogs irrigation canals. The topsoil being lost with each rainstorm takes hundreds of years to form. Loss of this agricultural rich soil invariably threatens food security – because over 60 percent of the country relies on agriculture, and at the same time the majority of the farmers cannot afford fertilizers.

Planting trees to protect soil has remained a major challenge because the trees are cut again for charcoal. Together with a nonprofit group called “Better Universe and Citizens” Haitians utilize an effective approach to reduce soil erosion and for land reclamation through a simple but effective process of planting fast-growth and deep-rooted perennial grasses (Ref 3). One of us (T.K.) is the CEO of the project, with several board members, including one of us (T.C.). In the project, grass is established either as seed or in nurseries, then transferred to the slopes. The program is proud of establishing the first grass nurseries in Haiti. The project achieves outstanding results and progresses from barren lands to grass-covered ground in a mere three months. Haiti’s tropical climate of hot weather and high rainfall propels this rapid growth.

The importance of this initiative is evidenced by the array of supporters for the project, which include individuals, civic organizations, churches and private industry. Nominal payments are made to the Haitians planting the grass to reclaim the land. The villagers use this vital revenue to feed their families and send kids to schools in a meaningful and green “win-win” sustainable scenario.

Haitians have liked the project and feel a sense of accomplishment when they protect their vital soils. The project has progressed through stages, from establishing whether grasses could be grown on eroded lands, to a stage where now Haitians determine baseline soil health indicators –such as earthworms – as they protect their soils. Earthworms are indicators of healthy soils.

National security plans in Haiti should address sustainable and resilient ecosystems for sustainable use of natural resources, for which this example initiative is a step in that direction. The project, which is just past the pilot stage, has the potential to protect and reclaim hundreds of acres of soils in Haiti. It is envisioned that grass-covered slopes will result in stable soils, as well as reduce mudslides during hurricanes. The grass will preserve topsoils and retain it on the slopes where it is needed, as opposed to clogging infrastructure, water bodies and fisheries. The board and program directors are so confident in the results that the program website reads: “We believe soil erosion in Haiti, and elsewhere in the world, will become a story of the past.” It will, however, take much larger awareness, funding and involvement of many to realize such significant global positive impact.

Tawainga Katsvairo
Dr. Tawainga Katsvairo is a consultant, project manager and strategist on a wide range of projects where he works with an array of companies from small startup companies to high asset and publicly traded companies. He is recognized in the science world for his research on perennial grasses. Dr. Katsvairo has authored over 70 publications and his research has been featured as exemplary articles in Research Highlights.