Get First Responders What They Need with Rapid Commercialization Techniques 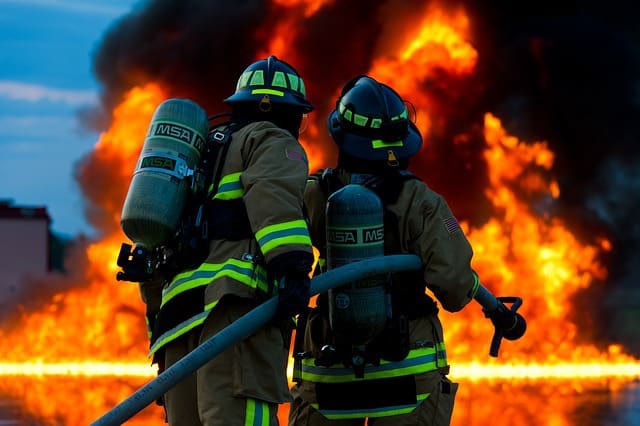 It’s absolutely true, from my experience, that first responders do run into danger while others are running away from it. It was my firm belief when I entered the federal government to give back to my country that I would make sure that first responders would benefit from the innovative public-private partnerships we could develop and implement. After all, who would be more important to arm with the most innovative capabilities to save folks’ lives and property? I am still so very proud of the small team we assembled that undertook great challenges that have made and can still make a difference for our first responder community – not only here in the United States, but around the globe.

Commercialization, broadly described, is “the development (or recognition) of market(s)/market segment(s) and the production, as well as delivery of products/services to meet the unsatisfied needs/wants of those market(s).” Our team developed key processes that the U.S. Department of Homeland Security (DHS) can, and should, use more rigorously to create cost-effective capabilities for the first responder community. Commercialization allows DHS and most other federal agencies to develop and deliver products/services to the first responder community in a more cost-effective and efficient manner, as compared to the more traditional governmental acquisition process – at the benefit of the first responders and, just as importantly, the American taxpayer. Through this commercialization process, DHS and others can foster new partnerships with the private sector to participate in cooperative product/service development efforts aligned to DHS and ancillary markets’ needs.

In a relatively short amount of time, DHS developed and continues implementing a “commercialization mindset” in its approach to responding to the needs of its stakeholders – but NOT fast enough! These stakeholders include DHS’s seven operating components (TSA, CBP, FEMA, ICE, USCIS, U.S. Secret Service and U.S. Coast Guard), the first responder community and the Critical Infrastructure/Key Resources (CIKR) owner/operators. The idea of utilizing a commercialization process at DHS was a much-needed and significant departure from the commonly employed acquisition model because it has the potential to yield significant benefits in terms of reducing research and development costs, as well as providing a much more rapid time-to-market for newly developed commercial products/services for DHS. Rather than have DHS pay for the development of custom “one-off” systems, which is frequently the case in military applications, it is apparent that DHS has much to offer the private sector in terms of Potential Available Markets (PAMs) that can be addressed in a more “commercial” fashion with firms competing for sales in an open and free market system. Figure 1 shows the major differences between a “pure” acquisition versus “pure” commercialization process, and our resultant DHS “hybrid” commercialization process a few years back. 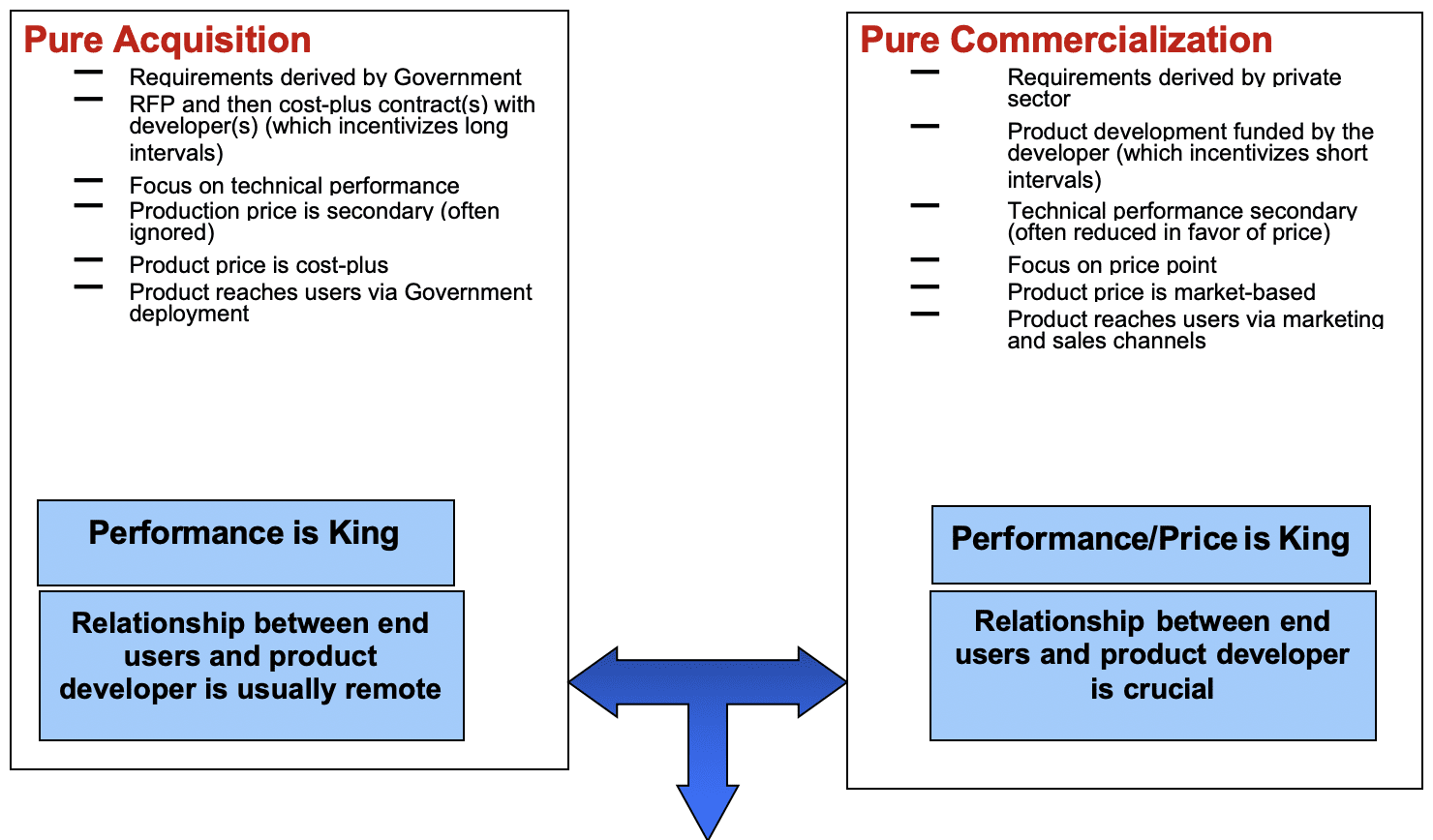 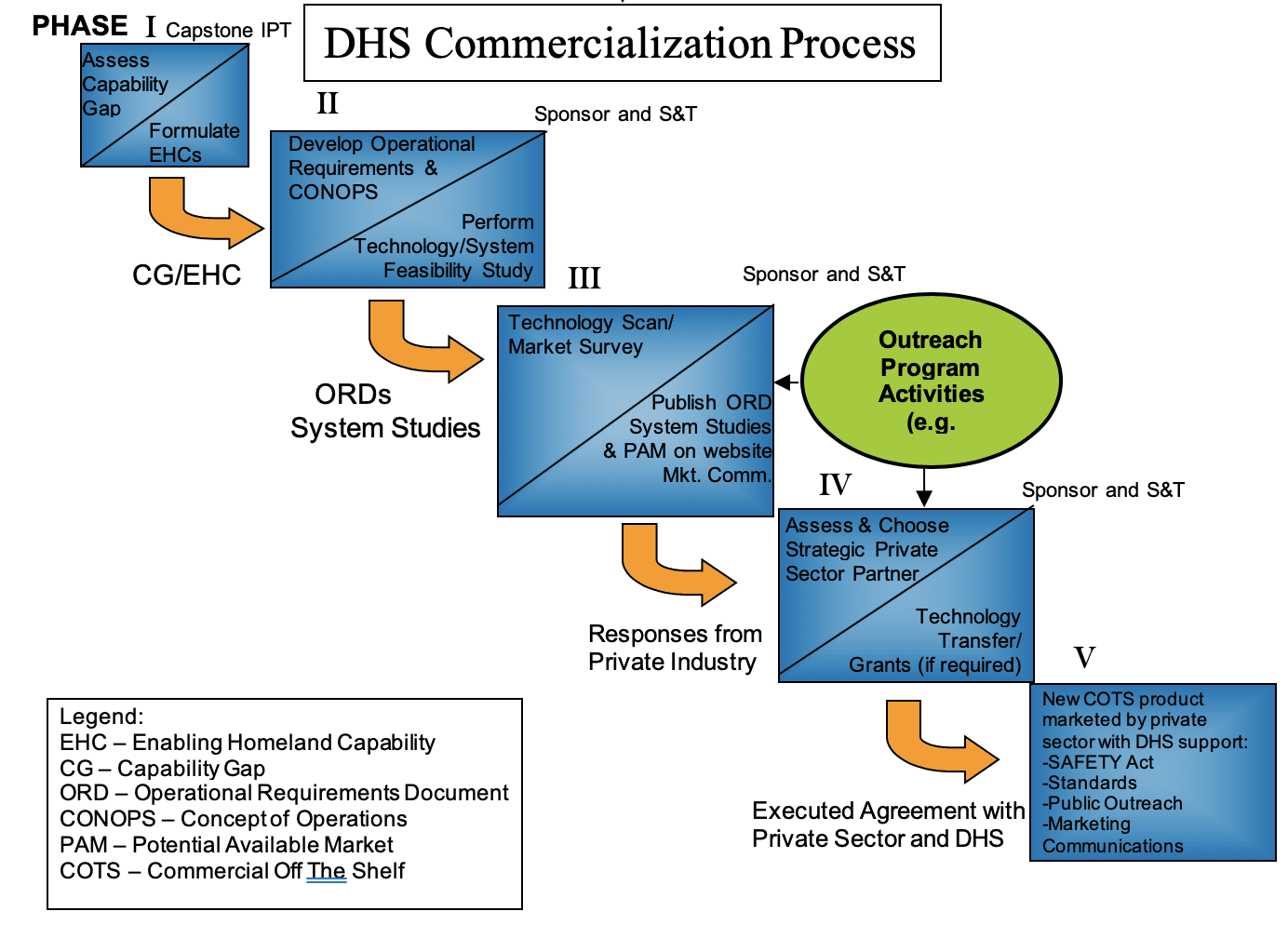 The SECURE (System Efficacy through Commercialization, Utilization, Relevance and Evaluation) Program, outlined in Figure 2, was one such effort leveraging the DHS commercialization process to meet end-user needs. Briefly, the SECURE Program was based on the premise that the private sector has shown repeatedly that it is willing and able to use its own money, resources, expertise and experience to develop and produce fully developed products and services for DHS if significant market potential exists. The private sector has shown remarkable interest in devoting its time and money to such activities if and when an attractive business case can be made related to large revenue/profit opportunities, which certainly exist at DHS and its ancillary markets. The private sector requires two things from DHS: 1) detailed operational requirements, and 2) a conservative estimate of the potential available market(s). This information can then be used by the private sector to generate a business case for their possible participation in the program. 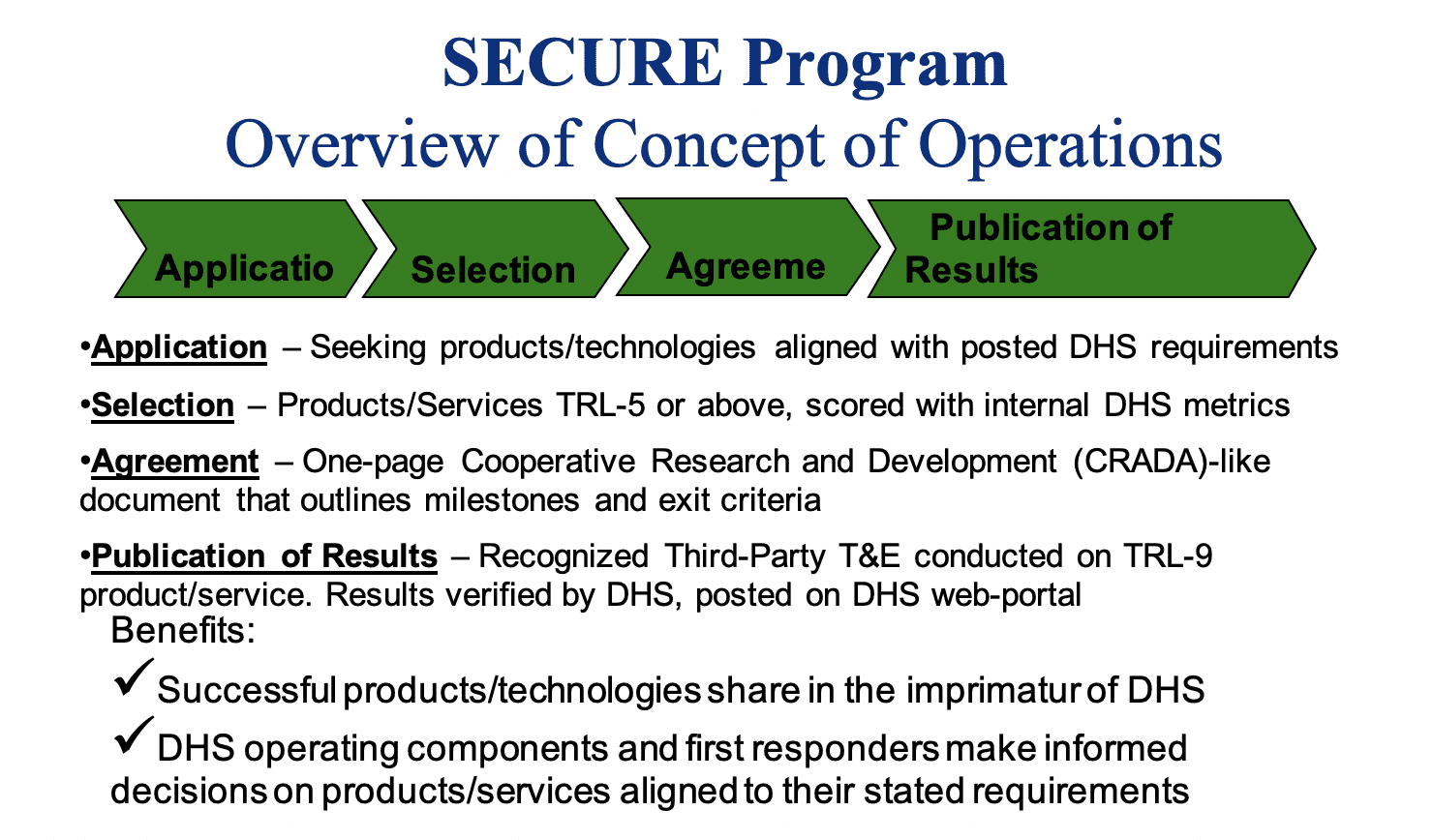 Figure 2 A brief overview of the SECURE Program Concept of Operations. (See: https://www.amazon.com/Thomas-A.-Cellucci/e/B004TOBAU2)

While the development of highly specialized products is still relevant to the department, DHS itself represents a substantial potential available market for widely distributed products – in many instances requiring thousands, if not millions, of product or service units to address unsatisfied needs. Couple to this the fact that DHS has responsibility for an array of ancillary markets – namely, first responders and CIKR owner/operators, representing large potential available markets in their own right – it is evident that substantial business opportunities exist for the private sector. Figure 3 shows those groups of individuals classified as first responders, according to Homeland Security Presidential Directive 8. While these groups represent a highly fragmented market, the size of the market is nonetheless attractive enough that many companies would seek to capture just even portions of it. 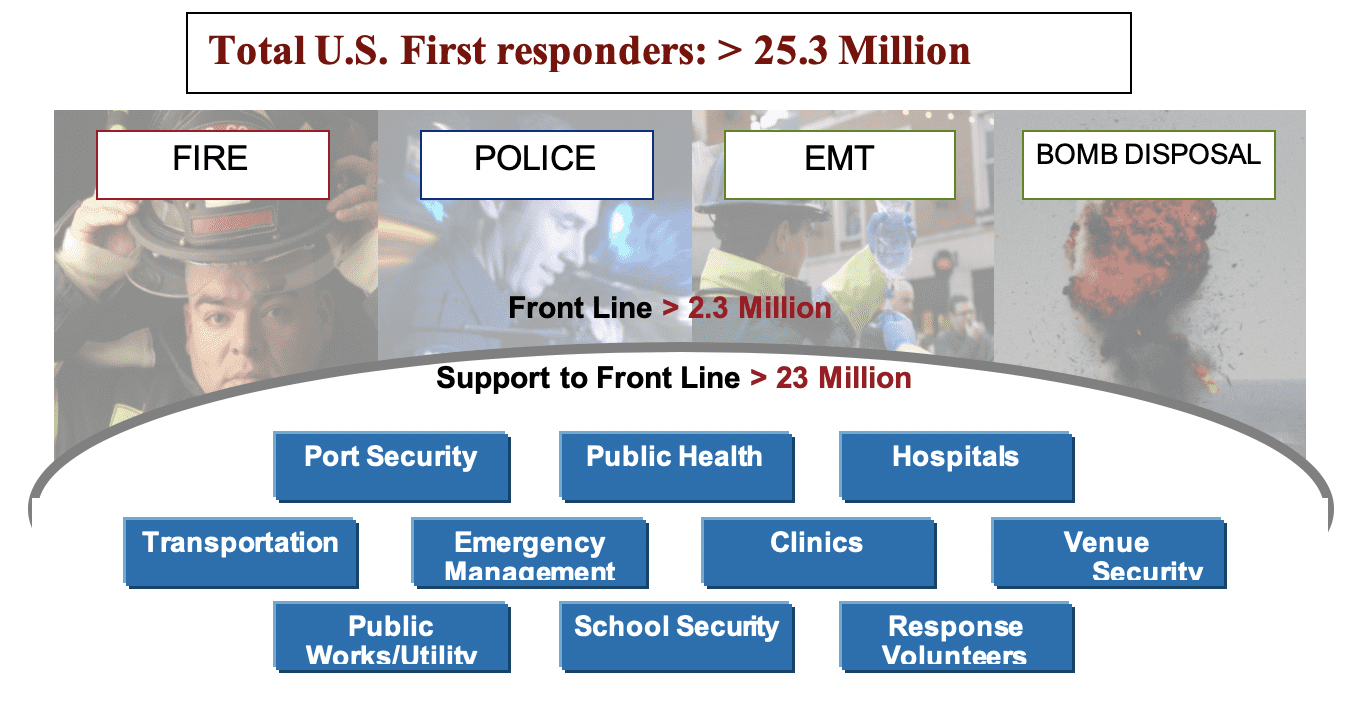 There should be a new, concentrated focus in understanding the requirements of members of the first responder community in an effort to close their mission-critical capability gaps. Furthermore, it is critical to elucidate the importance of providing a clear representation of the potential business that could be afforded the private sector if it uses its vast resources and skills in commercialization to rapidly provide first responders with much-needed capabilities to do their jobs more effectively and efficiently.

While volumes have been written1 on effective market sizing and segmentation, the SECURE Program, for example, provided a conservative estimate of the potential available market (PAM) for a given system (product or service) which needed to be verified through independent research by a potential commercialization partner.

As previously mentioned, DHS’ commercialization process relied on providing two key pieces of information to potential solution providers in order for them to devote their valuable time, money and resources to develop products and services for use by DHS and its stakeholders: 1) a clear and detailed delineation and explanation of the operational requirements, and 2) a conservative estimate of the potential available market for a potential commercialization partner to offer potential solution(s). I have discussed the development of Operational Requirements Documents (ORDs) through the publication of several books, training materials and articles to address the first half of this equation, and the following pages of a comprehensive market potential template address the latter. 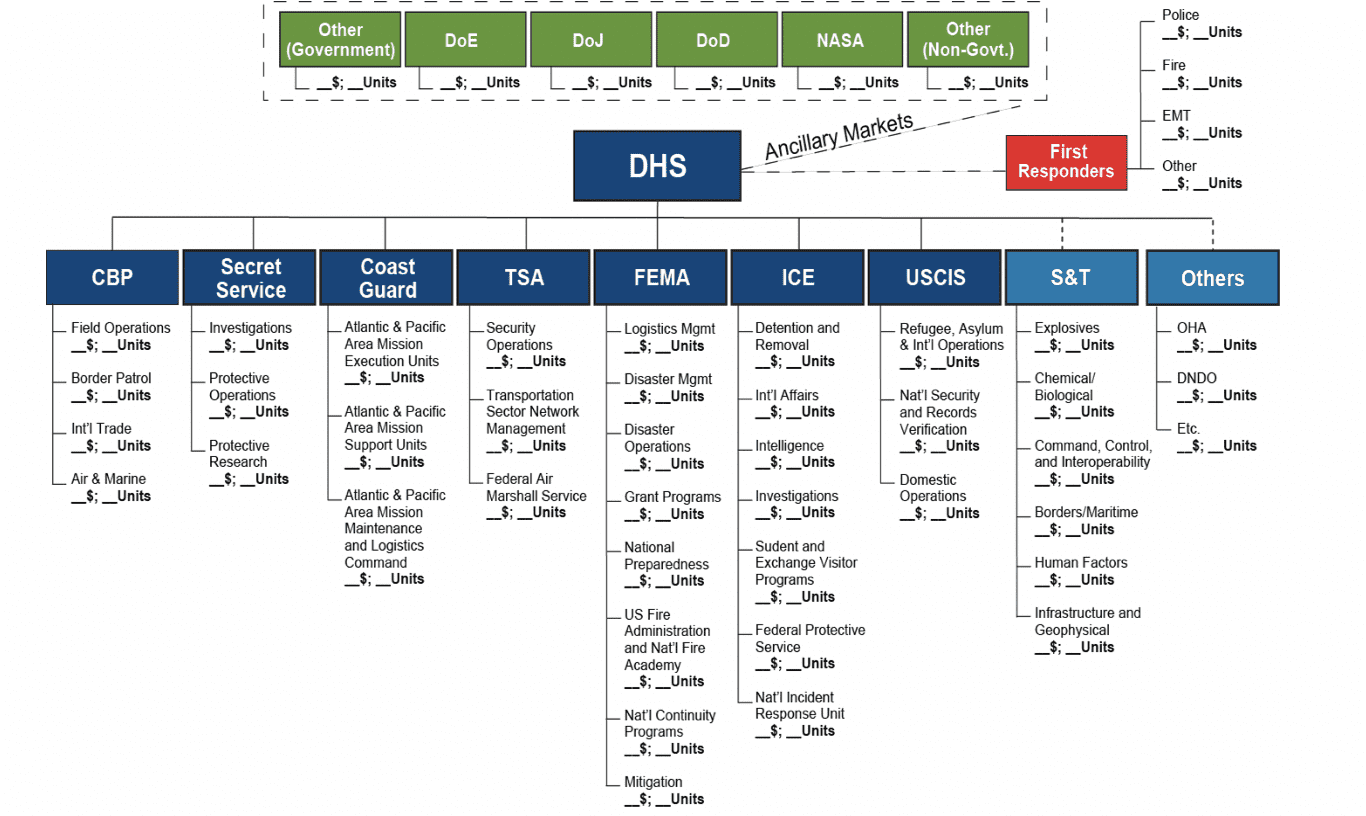 Figure 4 Market potential template above maps out many potential available markets to which DHS has direct control and responsibility or acts as a conduit. Also note the relationship to other markets/market segment(s) throughout the U.S. government (and other non-government markets like CI/KR).

It is important to understand not only the detailed operational requirements necessary to provide DHS stakeholders with mission-critical capabilities, but also understand the volume of potential users of these solutions. DHS itself can represent a substantial potential available market; in many instances requiring hundreds, if not thousands of product or service units to address unsatisfied needs. Couple to this the fact that DHS has responsibility for so many ancillary markets (e.g. first responders, critical infrastructure and key resources, etc.) representing large potential available markets, it is evident that substantial business opportunities exist for the private sector as these large pools of potential customers and users represent the “lifeblood” for businesses (see Figure 4). We outline the top level of key players in the public and private sectors. In turn, each “branch” of the template has been further segmented to hone in on detailed opportunities.

For example, in Figure 5 we’re interested in demonstrating the number and scope of various firefighting sub-segments or applications within the firefighting market segment. While these groups confront the same basic threat, each sub-segment represents and responds to specific threat profiles requiring different tactics. Similarly, another part of this market revolves around special technical fire teams, which encounter very unique challenges that most fire departments are not expected or are ill-equipped to confront, such as widespread forest fires. HAZMAT-capable fire teams may deal with material disposal, incident investigators might not require the same heavy-duty tools that fire crews need, and military fire suppression crews frequently have to battle an inferno that is driven by special propellants (i.e. jet fuel).

The wide variety of requirements within the fire protection and suppression market shows the keen observer just how potentially large this market may be for a given product or service, or demonstrates potential new unsatisfied needs/wants. In addition, rather than limiting a solution provider to offering a given solution to a very specific sub-segment of a given market, this comprehensive template demonstrates the wide variety of market users of a requirements-driven firefighting solution platform that can be potentially tailored to meet the individual and unique needs among the various firefighting sub-segments. Instead of limiting solution providers, government should encourage the private sector to market a valuable solution because a given need may be shared across both public- and private-sector communities.

In providing critical information to the private sector in terms of the collection and articulation of detailed operational requirements and a conservative estimate of the potential available market, DHS can lay the foundation for cooperative product development with the private sector. These relationships then can drive the commercialization process and ensure that end-users such as first responders receive needed products/services in a timely manner at minimal cost to DHS. Given these relationships, it is relatively easy to make a case for commercialization at the department (see Figure 6) as it results in “wins” for the American taxpayer, public and private sectors.

Figure 6 A benefit analysis of an innovative, public-private partnership like the SECURE Program shows a number of positive outcomes for taxpayers as well as the public and private sectors.

In conclusion, a commercialization process is ideal to match the detailed requirements of the collective first responder community with product development efforts undertaken by the private sector who seek access to the large potential available markets represented by the first responders. Commercialization is not only an attractive method by which DHS can develop products/services for first responders, but it is also beneficial to both the public and private sectors and – most importantly – to the American taxpayers at large.

In closing, I would like to express my sincere appreciation to all those who worked tirelessly at DHS and the White House to make commercialization a new tool to assist our everyday heroes – the members of our first responder community.