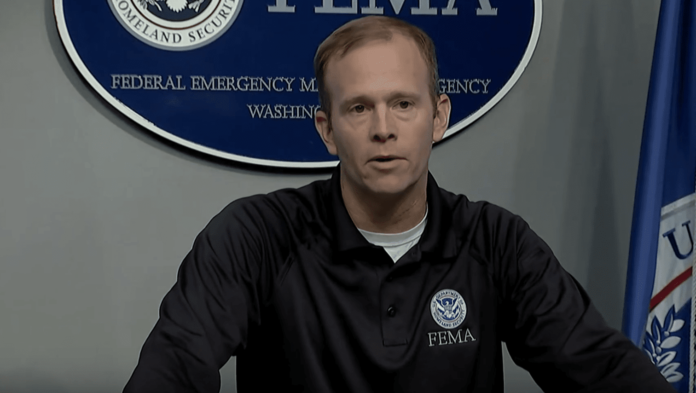 FEMA Administrator Brock Long said today at the White House that officials were concerned on Tuesday that “we did not like the level of evacuation activity that we were seeing” as Hurricane Michael roared toward the Florida Panhandle.

Michael made landfall this afternoon as a Category 4 storm with up to 155 mph winds.

“The first initial indications from the National Hurricane Center started coming in around Saturday. And they picked it up and started raising the flag that, hey, this system is going to go from a wave to a depression, and could potentially rapidly intensify,” Long said.

“And unfortunately, that’s typical of the Gulf Coast. And when they do this, you know, citizens have less time to prepare or heed the warnings. We are concerned that many citizens chose not to heed those warnings, but we’re prepared with search-and-rescue teams to try and go in and do what we can.”

As the evacuation level was deemed too low a day before the storm made landfall, Long gave plaudits to Gov. Rick Scott for using new wireless emergency alert capabilities and sending out text messages last night. “Leaned forward and said, hey, get out of there. And so we were trying to get people to really take the storm seriously. A lot of people did heed the warning, but then there are those that chose to stay behind. And unfortunately, first to first responders may not be able to go in and rescue those who dial 911 at this point,” Long said.

President Trump said he had “a long talk” with Scott and was “very well coordinated with all of the states.”

“And you know, one of the things that must be said is it’s not so easy for some of these people to leave. Some of the areas are very poor. Not easy for a person without the necessary money to leave. So what we’ve done is we’ve sent buses, which had a lot of different — we’re doing a lot of different things to try and remove people from the area,” Trump said. “But a lot of people are very poor in certain of those areas, and it’s very tough for them to leave. That’s one of the problems you’re finding, I guess.”