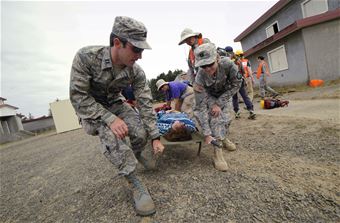 Pathfinder-Minutemen was a joint multi-agency, multi-state exercise based onresponse exercise designed to replicate a post-earthquake and subsequent tsunami environment with casualties in need of immediate medical treatment.

Military members worked side-by-side with their civilian counterparts in 12-member teams, accomplishing two scenarios during the day to find and rescue simulated causalities and provide immediate medical care and recovery.

The teams were organized to have a variety of skills in each group, to include specialists in search and rescue, medicine and other key first responders.

A key aspect of the training was ascertaining a common language between team members while integrating skill sets during the search and recovery process.

"When a disaster strikes, no one group or agency can do it all," he said. "So why wait until game day? In these events we are learning a common language between group members while building relationships and incorporating vital skills sets."

As the exercise unfolded, three separate scenarios began to unfold. The first involved a water rescue and drowning victim recovery in Slusher Lake. An air crew with the US Coast Guard’s Air Station Astoria assisted with hoist operations using a HH-60 Jayhawk helicopter, while members of the Oregon Air National Guard’s 125th Special Tactics Squadron provided the water recovery and search teams on the ground.

The second scenario focused on house to house searches for injured victims at the MOUT Site, while the third training scenario involved teams locating and rescuing victims trapped in vehicles and simulated collapsed buildings at the rubble pile.

"The fortunate part of doing a morning and afternoon exercise is that we can learn from the mistakes from the first half and in the second half play a little better," said Graver.

Working in concert with the military was the Oregon Disaster Medical Team, led by Dr. Jon Jiu, a professor at the Oregon Health Science University in Portland.

Jiu described how he joined the ODMT in 2000 when his friend, Dr. Helen Miller, ‘twisted his arm’ to join. "Nine months later 9/11 happened," he said.

Officials believe the Pacific Northwest is overdue for a magnitude 7.0 or greater earthquake, due to the Cascadia Subduction Zone- — an area that extends along the Pacific coastline from California to Vancouver, British Columbia. Staying prepared is never too far from Jiu’s mind even in light of recent media reports of a devastating earthquake for the region.

"We have been focused on this training for over five years so it is not like we are just now beginningthe process," Jiu said. "But yes, having the public being aware of the hazards as well."

Jiu said in the past several years these exercises continue to grow and become more complicated as areas to improve and shortcomings are identified and built into subsequent training scenarios.

"This is a full-scale exercise from start to finish and requires both the military and civilians to do the job," Jiu said. "Certainly having the military with search and rescue capabilities and air evacuation assets are critical to having our doctors and medical teams treat the injured."

Jiu echoed Graver’s assessments about the training for Pathfinder-Minuteman 2015and emphasized how communication is the common thread.

"Honestly understanding each other’s capabilities and the abilities on how to work together is the most important aspect of this type of training," he said.

Many live in the local area and would be susceptible to the hazards of a tsunami following a major earthquake.

Corinne Bechet from Manzanita, Oregon, played the role of a diabetic patient who had missed two dialysis treatments and was suffering weakness. Later on that day, she role-played someone who had suffered burns from a house fire. Having done this training over the past three years, she said she understands the importance to the overall objective.

"It’s very important to know what to do because we live in an earthquake place. I already have a bag ready to go at home," she said.

Knowing the risks, Bechet weighs the pros and the cons of living in a tsunami zone.

"The beach is my medicine, I run every morning with my dogs," she said. "I am more and more prepared, and the more training and awareness allows me to feel at ease with nature’s uncertainty."

Previously a caregiver and medical provider, the roles were reversed for Oregon Air National Guard Senior Airman Melinda Duran, who is a medic with the 173rd Fighter Wing’s Medical Group. She said reversing her role as casualty victim gave her a renewed understanding what a patient would experience in a natural catastrophe.

"I guess I did not realize how complicated it was to get someone out of a fallen building," Duran said. "It took six people to drag me on a skid through a series of holes. Now I know that the things a patient will experience by the things that hurt me in the extrication process."

Duran begins medical school soon but will continue to participate in this type of training and hopes to draw upon the experience from these exercises. She sees the benefits for all parties to constantly improve understanding, efficiency and readiness.

"Communication is huge. It was the biggest issue today especially across the different services with civilian and military. It probably was my biggest takeaway from the training," she said.

Testing the steps that it took to find, recover and move patients put into play all of the preparation that Graver and Jiu established before this year’s exercise.

"Victims were found, teams were sent to triage to treat them, they were flown on hypothetical helicopters [pickup trucks] all the way to casualty collection points," said Graver. "We accomplish all of that in this exercise."

"We are trying to standardize the information flow so we can do the ‘best for the most’ when we find victims in these situations," Graver said.

Graver said the learning will continue even after the last tents and radios are packed up. All participants received packets during the start of the exercise, and are encouraged to share their experiences and feedback, which will be used in future training exercises.

"The last page of the packets is an after action report," Graver said. "They can give us their thoughts and offer other vital information so we can regenerate substantial knowledge going forward."