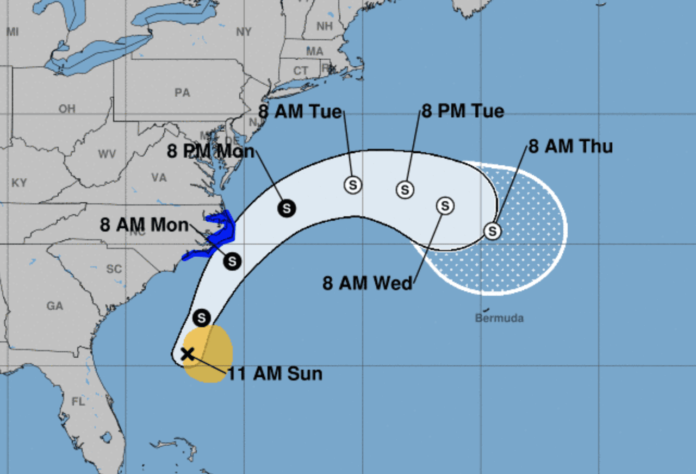 The first tropical storm has formed before the official start of the hurricane season on June 1, as the National Hurricane Center issued advisories for Tropical Storm Arthur.

This morning, a tropical storm warning was in effect for Surf City to Duck, N.C., and Pamlico and Albemarle Sounds.

At 1100 AM EDT (1500 UTC), the center of Tropical Storm Arthur was located near latitude 30.5 North, longitude 77.4 West. Arthur is moving toward the north-northeast near 9 mph (15 km/h). A turn toward the northeast with an increase in forward speed is expected during the next 24 to 48 hours. On the forecast track, Arthur will remain well offshore the east coast of Florida, Georgia, and South Carolina today, and then move near or just east of the coast of North Carolina on Monday. Arthur is forecast to turn away from the East Coast on Tuesday.

Maximum sustained winds have increased to near 45 mph (75 km/h) with higher gusts. Some additional strengthening is forecast during the next 24 to 36 hours. Arthur is likely to lose tropical
characteristics on Tuesday.

Tropical-storm-force winds extend outward up to 115 miles (185 km) from the center.

Arthur is expected to produce total rain accumulations of 1 to 3 inches over coastal North Carolina tonight and Monday, with locally higher amounts.