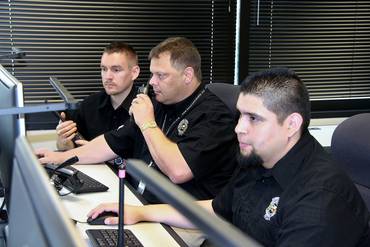 In 2014, HCOHSEM acquired additional space at Houston TranStar to better accommodate staff and provide a larger and more efficient EOC to serve its more than 4.3 million residents.

HCOHSEM is touted as a national model of best practices in emergency planning, preparedness, response and recovery. “In a dynamic region with more declared disasters than most states,” HCOHSEM said its “formula for success is the engagement of all levels of government, the business community and volunteer organizations.

HCOHSEM’s newest upgrades improve emergency operations not only in Harris County, but throughout the region.

The EOC “exists to prepare and protect its residents from disasters of all kinds,” HCOHSEM said, adding that, “During an emergency, HCOHSEM activates its Emergency Operations Center to support and coordinate emergency operations, and to keep stakeholders and the public informed.”

Without solid communications during a crisis, HCOHSEM said, it would be impossible to provide assistance to local governments and incident managers in the field, and very difficult to inform the public.

In addition to providing and prioritizing resources during an activation, HCOHSEM said its logistics section maintains and staffs the CC.  Both the EOC and the CC are connected to three automatically switching 800 KVA emergency generators and a 50 KVA UPS for surge protection and continuous operation.

Some of the systems available in the CC are:

During an emergency, HCOHSEM coordinates with regional, state and national operations centers through a host of systems and back-up systems, including the Internet, video-teleconferencing, satellite phones, 800 MHZ radio, short-wave/amateur radio and local, state and national warning/notification systems.

Working with partners such as the FBI, Drug Enforcement Administration, United States Coast Guard and Department of Homeland Security has created a tertiary communications capability that is unique in public safety communications.

“In 2014, we enhanced our Military Auxiliary Radio Systems to become Department of Defense compliant,” Sloan added. “This allows for direct communications to networks with official national security or emergency preparedness events.”

When disaster strikes and modern technology shuts down, HCOHSEM said it utilizes Amateur Radio Emergency Service (ARES) ham radio for backup communication needs. Through the commitment to emergency service set forth by HCOHSEM, ham radio has served as the backbone of emergency communications and continues to be an important tool for the EOC.

HCOHSEM’s staff has been trained in radio operations and several employees have received their Amateur Radio licenses. HCOHSEM’s radio experts meet regularly to practice the art of radio communications and enhance their ability to provide and teach emergency communications support in the event of a disaster.

“We trained more than 300 radio operators in 2014. That is three times the number from the previous year,” said HCOHSEM Logistics Chief Joey Clements. “Texas is second nationwide in the number of licensees, with more than 50,000 amateurs. By utilizing the DHS AUXCOM class, we have trained a cadre of hams in public safety systems.”

HCOHSEM said it “works closely with local amateur radio operators who help monitor the airwaves during emergencies. They have, in fact, been there in virtually all disasters in recent memory. Hurricanes, fires, ice storms, floods and so on. According to the American Radio Relay League, amateur radio operators have been providing communications in natural disasters for more than 100 years.”