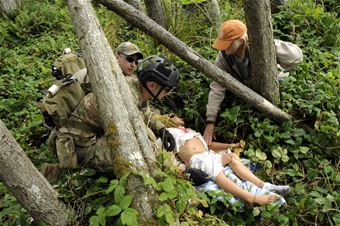 The exercise scenario was part of an annual Defense Logistics Agency requirement to observe the base’s response to a fuel-related spill.

“The medical group is involved so we can inspect our response timing in case of an emergency,” said Air Force Lt. Col. Jane Free, chief nurse of the 52nd MDG, and wing-inspection team lead. “We just want them to show they’re capable and ready. They need to be fully operational in 20 minutes.”

During the exercise, a simulated fuel geyser caused several mock injuries which required medical assistance, including fuel in one victim’s eyes, splash burns to the face and hands of another individual, as well as a third victim who suffered a fractured ankle during the event.

Air Force Senior Airman Melissa Seel, an aerospace medical technician with the 177th MDG, arrived to the exercise-training scene in an ambulance — ready to transport victims of the simulated spill.

“It’s good to see how the active-duty force responds to an event like this,” Seel said.“If something like this were to happen in a real-world setting back home, I would definitely feel more comfortable assisting.”

“It’s crucial for us to be able to integrate with active-duty Airmen.” Blackledge said. “There should be no difference between us. We should all train the same, we should all know the same, and we should all do the same.”

Air Force Staff Sgt. Carolina Haviland, a bioenvironmental engineer with the 177th MDG, was assigned to help set up a decontamination staging area for the simulation.

“I was really impressed with how the decontamination was set up,” Haviland said. “Everyone knows their own job and their own task, so everything runs smoothly. It was very well organized.”

The simulated fuel spill that the 177th responded to on Spangdahlem is something that could possibly happen back at home, and Haviland said she plans on bringing some of what she learned back to the 177th.

“I asked for all of the 52nd’s checklists and guides that maketheir job easier, or prevents any errors or misunderstandings, and they have been very helpful in sharing,” Haviland said. “They have a system in place that already works — there’s no reason to try and reinvent the wheel. I am very thankful, and enjoy working with this team.”

The opportunity to train is appreciated not only by the members of the 177th MDG, but by the 52nd MDG as well, Free said.

“We know that having the 177th here in the clinic setting is very beneficial – it helps us out,” Free said. “In turn, we hope that having the Air National Guard with us during our training is valuable to them as well.”