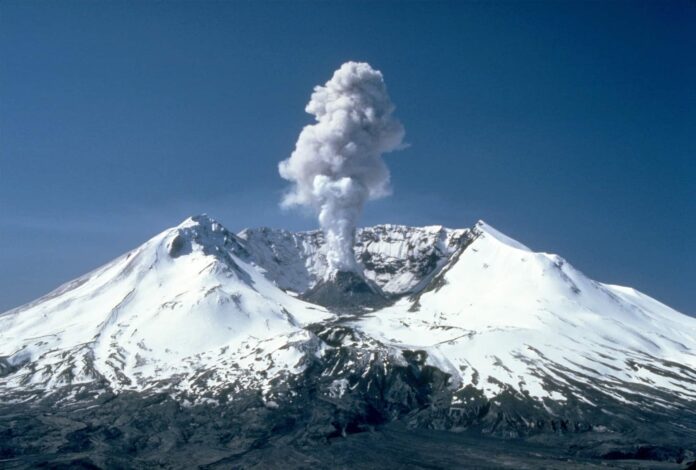 The updated U.S. Geological Survey assessment finds that 161 U.S. volcanoes pose potential threats to American lives and property, eight fewer than in 2005. The eighteen very highest threat volcanoes are in Alaska, California, Hawaii, Oregon and Washington. Thirty-nine other volcanoes are high threat, 49 are moderate, 34 are low, and 21 are very low threat.

As part of its program of keeping officials and the public apprised of volcanic threats, the USGS periodically reassesses the threat level of U.S. volcanoes and updates volcanic threat assessment documentation. In 2005, the USGS published its first national volcanic threat assessment in support of establishing a National Volcano Early Warning System. The assessment helps to prioritize U.S. volcanoes for research, monitoring and mitigation efforts based on objective measures of volcano hazards and exposure of people and infrastructure to those hazards. The new publication is an update of that assessment.

“More than ten percent of the world’s known active and potentially active volcanoes are within U.S. territories,” said John Ewert, a USGS geologist and lead author of the updated Volcanic Threat Assessment. “All of these volcanoes pose some degree of risk to people and infrastructure.”

Ewert and his USGS colleagues applied specific criteria to each volcano to derive a score, and grouped volcanoes into five threat categories. “The ranking is not a list of which volcano will erupt next,” said Ewert; “instead, it is a way to help focus attention and resources where they can be most effective.”

The United States is one of Earth’s most volcanically active countries.

The mountainous landscapes of California, Oregon, Washington, Alaska, Hawaiʻi, American Samoa and the Mariana Islands are punctuated by volcanoes. Born along the margins of converging tectonic plates or above intraplate hot spots, these volcanoes are a part of our country’s history and culture. But when erupting, these same volcanoes threaten the health and safety of residents and can damage property and infrastructure.

The effects of eruptions are usually greatest near the volcano but can also extend far downstream, downwind, and can even persist over time. Airborne ash clouds have caused hundreds of millions of dollars of damage to aircraft and nearly brought down passenger jets flying in U.S. and international airspace. Ash falls have caused agricultural losses and disrupted the lives and businesses of hundreds of thousands of people in Washington and Alaska. In California, noxious gas emissions have resulted in direct loss of life, and in Hawai’i, have given rise to widespread human respiratory ailments.

In 2018, as in 2005, Kīlauea ranked as the U.S. volcano with the highest threat score. Kīlauea is the most active U.S. volcano; it erupts fluid lava flows but is also capable of explosive eruptions. The eruptive activity in 2018 and the destruction of residential subdivisions on its flanks are clear examples of why Kīlauea is a very high threat volcano.

Eleven of the eighteen very high threat volcanoes are in Washington, Oregon or California, where explosive and often snow- and ice-covered volcanoes can project hazards long distances to densely populated and highly developed areas. Five of the eighteen are in Alaska near important population centers, economic infrastructure or below busy air traffic corridors.

Several volcanoes were added to the 2018 assessment, notably these: Salton Buttes, California (high threat); Soda Lakes, Nevada (moderate threat); and Tana, Alaska (low threat). Six additional volcanoes from the Commonwealth of the Northern Mariana Islands, along with three volcanoes from American Samoa, were also added to the assessment. Volcanoes were also removed from the list after more sophisticated age-dating techniques found a lack of eruptive activity over the past 11,000 years.