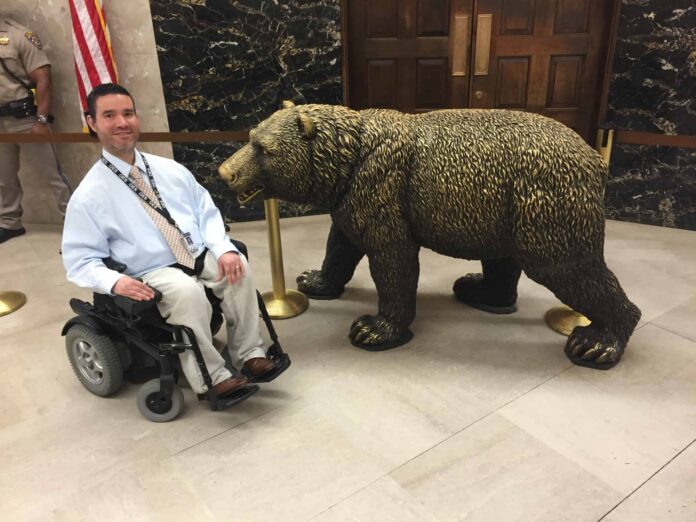 California native Vance Taylor has become one of the most formidable and respected voices on two of the most complex issues in emergency management: critical infrastructure and people.

Having worked with public and private sector leaders in the water infrastructure community for nearly two decades, Taylor’s presence and perspective on how this life-sustaining community can address and prepare for dynamic risks (e.g. service disruptions, cyber-attacks, decaying infrastructure amidst increased public demands, terror attack, etc.) is frequently sought out. The same is true for his leadership in representing individuals with disabilities and access or functional needs to ensure they are actively engaged and included in emergency response planning and response and recovery operations.

Successfully navigating the politics and constituencies of all of those communities is not for the weak of heart or spirit, but no one can ever accuse Taylor of ever being weak in either category. The greater challenge is keeping up with him and what he is doing to make a difference for people and industry members that unfortunately are often over looked. That type of initiative and willingness to take on tough assignments are just a few of the reasons Gov. Jerry Brown tapped this native son to return home to California in 2015 to serve as chief of the Office of Access and Functional Needs at the California Governor’s Office of Emergency Services (Cal OES).

Few, if any, states can rival California when it comes to emergency management challenges. From earthquakes, floods and fires, to mass casualty events and critical infrastructure threats and stresses, California is perpetually in the news nationally and internationally dealing with often record-breaking calamities. And if you’re watching any of the news coverage and response operations, you will undoubtedly see Taylor working with decision-makers ensuring his perspectives are raised, heard and addressed.

HSToday sat down with Vance Taylor to get his take on his work in California and the state of readiness he sees for the whole community and the water infrastructure constituencies he has worked with over the years.

HSToday: How has California led the way on access and functional needs?

Taylor: Understanding the harsh reality of how unfairly all disasters affect our communities, California did something unprecedented in 2008: It leaned forward and established my office.

As chief of the Office of Access and Functional Needs, I am responsible for ensuring that the needs of individuals with disabilities and persons with access or functional needs are identified before, during, and after disasters and that they’re integrated within the state’s emergency management systems.

This office promotes policies that support whole community integration, builds resilient communities, and furthers preparedness by creating a blueprint for integration that’s being implemented throughout every jurisdiction in California and by other states to ultimately build a national strategy for inclusion.

HSToday: Many people in emergency management are familiar with the term “access and functional needs,” but how do you explain or define it for those who aren’t?

Taylor: “Access and functional needs” refers to individuals who have developmental, intellectual or physical disabilities, chronic conditions, injuries, limited English proficiency, or who are older adults, children, homeless, transportation disadvantaged or in late stages of pregnancy. In a state with nearly 40 million people, that’s a significant number of people.

HSToday: California seems to have a perpetual emergency disaster season with fires, floods and even acts of violence such as the San Bernardino shooting occurring. How have those incidents helped or hindered mobilization on access and functional needs-related preparedness issues?

Taylor: The disasters we faced in 2017 illustrate that for the communities we serve, the integration of access and functional needs is often the difference between life and death. Of the individuals we lost in disasters last year, an overwhelming number of them had access or functional needs. This is the reality of what we experienced. And were it not for the tremendous work we’ve been doing with our partners, the number of people who died and the number of people who suffered would have been greater.

Ours is a mission to save lives and reduce suffering. In 2018, we can – and should – use what we’ve learned and recommit ourselves to integrating access and functional needs in a more meaningful and impactful way. That’s how we’re going to make this year greater than any that’s come before it.

HSToday: What are the three biggest areas or gaps you see regarding the integration of access or functional needs in emergency management?

Taylor: Without a doubt they are communication, evacuation, and sheltering. Did we use ASL interpreters at press conferences, push life-saving information out in multiple languages, and use alternative formats? Did everyone in the evacuation zone get access to free, accessible transportation resources? Did survivors shelter in facilities with accessible parking, bathrooms, showers, and wraparound services? If the answer to any of those questions is ‘no,’ then there were gaps in how we integrated the needs of individuals with disabilities and people with access or functional needs. Depending on the circumstance or disaster, the consequences of those gaps could be individual suffering or loss of life.

HSToday: Can you share a personal experience with an emergency that has shaped your leadership approach to these issues?

Taylor: A few weeks after being sworn in as chief, I responded to the Butte and Valley fires in Northern California. I’ll never forget seeing the scorched landscape, passing downed trees, and how the smoke burned in my lungs every time I inhaled. Because it was hot and muggy, and everyone was covered in sweat and ash, showers were in high demand. But, because there weren’t any accessible showers, survivors with disabilities and access or functional needs had to watch as their non-disabled counterparts got to refresh themselves while they, due to a lack of integration, had no choice but to sit in their filth for four days until portable accessible resources could be brought in to accommodate their needs. Here they were having lost everything, many even losing their wheelchairs to the fires and now they couldn’t even shower. It broke my heart and forever changed the way I look at my role. If we don’t push beyond the limitations of our existing emergency management systems to meet the needs of the whole community, who will? We each share in that responsibility and it’s my privilege to lead the effort.

HSToday: In addition to your own personal and professional experiences with leading on preparedness issues for the whole community, you are also a water infrastructure expert. What’s your view on this critical infrastructure area and its state of preparedness and resilience?

Taylor: There’s a saying: “If you lose power, you light a candle. If you lose water, you move.” From a preparedness and resilience standpoint, water is an absolute must-have. Unfortunately, for thousands of rural municipal water systems, the capability to provide clean, safe, reliable service to the communities they serve is in jeopardy because they don’t have a large enough tax base to cover the costs associated with replacing aging infrastructure, maintaining operations, and closing security gaps. Until we’re willing to explore innovative approaches to leveraging public private partnerships to shore up those areas, our ability as a nation to ensure a resilient water sector may be limited.

HSToday: As the president, Congress, states and cities begin to debate future infrastructure investments and policies, what guidance do you have for them to make the best decisions possible?

Taylor: I would encourage them to read the recent study from the National Institute of Building Sciences (NIBS), outlining that for every federal grant dollar spent on disaster resiliency and mitigation, the U.S. can save an average of six dollars. As it relates to infrastructure investments in the water sector, I’d argue that the return on investment is even higher because, in addition to the immediate cost savings associated with not having to replace broken pipes, the financial benefits of securing water for fire suppression, running hospitals, enabling manufacturing, operating airports, and fueling the operational elements of our economy are exponentially greater.

HSToday: Why do we continue to see some of the same problems needing to be readdressed after emergencies occur? What don’t we have right yet?

Taylor: The problems we continue to see are symptoms of a larger issue; the existing culture within emergency management needs to change. Inclusion isn’t an add-on, it’s the law. More than that, it’s the right thing to do. I’m proud of how far we’ve come, but recognize we’re not ‘there’ yet. As our culture comes to encompass the “one team, one fight” philosophy, our planning will improve, our response will get better, and our recovery will be enhanced. In short, we’ll become a safer, more resilient nation.

HSToday: Who inspires you to be a better leader in today’s homeland security community?

Taylor: My family, hands down. They inspire me to be a better person and a better leader. The work I do is for them. I want them to be safe, secure, and optimistic. I want them to be strong, kind, and resilient. I want them to be empowered to overcome adversity, to maintain their integrity, and to do all they can to help others. Former DHS secretaries have said that homeland security starts at home – and they were right.

HSToday: If you had a chance to brief DHS Secretary Kirstjen Neilsen on one issue, what would it be and what would you hope to say?

Taylor: I would convey to her the importance of raising the profile of the whole community within the department’s leadership. Integration doesn’t just apply to emergency management. Seeing qualified, capable individuals with disabilities and access or functional needs serving in leadership roles within DHS would send a powerful message. Conversely, not seeing anyone with access or functional needs in leadership positions sends a powerful message, too.

The views expressed here are the writer’s and are not necessarily endorsed by Homeland Security Today, which welcomes a broad range of viewpoints in support of securing our homeland. To submit a piece for consideration, email HSTodayMag@GTSCoalition.com. Our editorial guidelines can be found here.
Share
Facebook
Twitter
Linkedin
Email
Previous articleOversight, Judiciary Chairmen Want to Hear from FBI About Missed School Shooter Tip
Next articleGovernment-Wide Cybersecurity Funds Would See Hike Under Budget