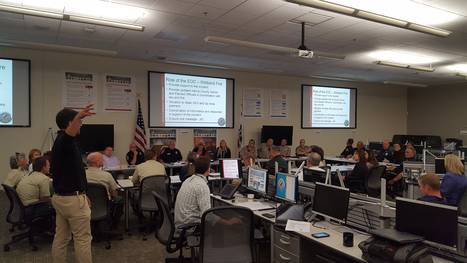 Wildfires are bigger, more destructive, more frequent and impact more people than ever before. For fire and law enforcement commanders, it is no longer unique to call for evacuations. Already in California this fire season, eight people were killed, more than 400 homes burned, three state declarations of emergency proclaimed and tens of thousands of people evacuated. With the increased need to evacuate to protect lives, efforts must be made by emergency managers to improve coordination between the numerous agencies that implement a successful, safe and efficient evacuation during an emergency.

Emergency managers are looking at a new paradigm where multiple evacuations involving scores of people are prevalent. Many of the evacuees are elderly or have special needs. Despite challenging budgets,emergency managers must prepare their jurisdictions for the inevitable.

Wildfire evacuations have challenged emergency managers for decades. The Great Peshtigo Fire of 1871 killed up to 2,500 people. In 1910, entire towns were destroyed in Idaho and Montana, and trains pressed into action for evacuations. A passenger train with a 1,000 people from Avery, Montana took refuge in a tunnel after crossing a burning trestle. In 2003, during the Southern California October Fire Siege, hundreds of thousands of people evacuated, 25 people killed and 3,710 homes destroyed. In October 2007, the event was repeated in Southern California when 3,069 homes were destroyed, except this time even more people evacuated. Estimates of more than a million people were evacuated, eclipsing those evacuated during Hurricane Katrina. In 2014, the small town of Weed, California was nearly destroyed by a relatively small 516-acre fire that consumed 157 single residences and eight commercial properties. The town was evacuated including an elementary school that was damaged by the flames.

In 2015, California experienced 8,745 fires – 23 considered major fires burning nearly 1,000,000 acres. The 70,868-acre Butte fire in Calaveras County destroyed more than 900 structures, 549 of which were homesand caused the evacuation of thousands of people in this rural community where 21 percent of the population is over 65. The fire killed two civilians over 65. Lake County had three major fires in a two month period with thousands of homes destroyed and four civilian fatalities, all over 65 years old.

In one of the fires in Lake County, about 19,000 people were ordered to evacuate the 76,067-acre Valley Fire that destroyed 1,955 structures, including 1,281 homes; 27 multi-family structures; 66 commercial properties; and 581 other minor structures. Fifty percent of the property owners who lost their homes may never rebuild.

Some county and city governments may go for extended periods of time without being tested by a real incident, but then get smacked with something beyond their capacity and expectation. Like many places in the state, Calaveras County, population 45,000, had only two and a half people assigned to their Office of Emergency Services under the command of the County Sheriff which only has 19 sworn officers. As well intentioned as they wanted to be, the county government just did not have the resources or the experience to handle this level of a disaster caused by the Butte fire.

The goal for emergency managers is to get their jurisdictions ready. They must be the conduits for bringing together agencies tasked with preparing and implementing evacuations, caring and sheltering evacuees and then getting those evacuated back home. They must ensure agencies are ready to use all effective communication methods that include: mainstream media, social media, emergency alerting methods and door to door notification.

To accomplish this objective, emergency managers must pull together all of the agencies involved in evacuations for an annual pre-fire season strategy meeting. Emergency managers are poised to facilitate such a meeting. Fires cross jurisdictions, so interagency cooperation and planning are critical. Simply meeting key players and agreeing to a set of simple principals before the evacuation order will make an enormous difference.

Evacuation terminology must be included in the discussion. California Penal Code Section 409.5 provides that specified law enforcement officers may close or restrict access to an area in the event of a disaster.

The California Office of Emergency Services (Cal OES) provides an important document, Legal Guidelines for Controlling Movement of People and Property During an Emergency, that outlines many of the issues associated with evacuations. It recognizes there is ambiguity on whether law enforcement can physically remove someone from a closed area, but law enforcement absolutely can prevent people from interfering with firefighters, endangering children or returning to a closed area once they have left.

The areas to be evacuated are determined by fire departments and given to law enforcement to execute. Not spelled out in the Cal OES document are standardized terms. Not standardizing terms has created confusion. Terms like mandatory, voluntary, advisory, order, warning and a combination of them such as "voluntary evacuation order" are all used. How they are used and what they mean is different in each jurisdiction. Other relevant terms that can be confusing are the level of closures. Can residents access the area? How about utility companies? Is it safe for firefighters and police to access? While it would be best if the state had standardized terms, at a minimum, each operational area should standardize its terms. A pre-season meeting should include this topic and decisions on what terminology will consistently be used.

Template plans have been developed for planned evacuation. These templates are widely used by the incident management teams and could easily be adapted and adopted for use by operational areas. Simple forms, combined with a map outlining the evacuation areas, can be a major contingency plan, so when the fire crosses a decision-point, the incident commanders can implement an evacuation order without delay and be supported by the numerous agencies required to help the evacuees.

Returning people home is as important as getting them out. More than once delays in returning people home have caused issues with looting, hostility at the evacuation centers and control points, not to mention the added social and financial expenses of caring for and sheltering people beyond the time necessary. The repopulation approval process must be discussed and agreed in advance. As an example, keeping people from returning home because there is no electricity is not acceptable. However, keeping them out is acceptable if they could get electrocuted.

Public information in the digital age is a dominant issue in emergency management on all levels. The use of traditional and social media, EAS messages, Internet-based notification systems like Everbridge and Reverse 911, bulletin boards, town hall meetings and face-to-face communication are all necessary during the evacuation and for notifying evacuees when they can return home. Pre-season planning should outline who is responsible for these notifications as well as situational reports. Clear, concise and coordinated messaging is never greater than during evacuations.

The pre-season meeting should be designed to be as much about networking as it is about agreement. It should offer an opportunity to create a culture of cooperation and a place to expose new players to the process. The emergency manager’s role is to facilitate the meeting, not "own it." A simple agenda should be used that includes:

The emergency management agency is the unifying organization to facilitate agencies tasked with evacuations and bring agencies together to prepare for evacuations and the care of their evacuees. A pre-fire season strategy meeting of the responsible agencies to discuss how they are going to implement an evacuation could make the difference between struggling with a mass evacuation, or having one that is expertly, efficiently and cooperatively executed.

Robert Lewin joined the Santa Barbara County Office of Emergency Management as an emergency manager in January 2016 after retiring as Fire Chief for the CAL FIRE San Luis Obispo Unit and the San Luis Obispo County Fire Department, where he oversaw the consolidated fire protection system which has 21 fire stations, two fire crew camps and one air attack base. He was also the Operational Area Fire and Rescue Mutual Aid Coordinator. Lewin also served as the incident commander on a Type 1 State Incident Management Team. He had been on incident management teams since 1995, and has held command positions on some of California’s most complex incidents including fires, floods, earthquakes, human disease, animal disease, hazardous materials incidents and special assignments. He has served on several state cadres for Incident Command System courses.

In the June, 2012 edition of Homeland Security Today, he wrote, In the Shadow of Fukushima: Facing the Fires of a Meltdown.