The partial government shutdown went into effect at midnight on Dec. 22 and there is no end in sight. What does this mean for the Department of Homeland Security?

The shutdown has far-reaching implications, affecting more than 800,000 federal workers, including more than 200,000 DHS employees who are working without pay.

President Trump and Congress hit an impasse over border wall funding last month, leading to back-and-forth proposals as the administration reportedly initially backed off its $5.7 billion request. The Washington Post reported Dec 23 that the White House offered a $2.1 billion deal for border security, which would provide funding for current border operations (including $1.3 billion the Senate included in its continuing resolution), border fencing and $400 million in discretionary immigration priorities. However, as the shutdown progressed, Trump stuck to his initial $5.7 billion request.

“I may declare a national emergency dependent on what’s going to happen over the next few days,” Trump told reporters on Jan. 6. “I think we’re going to have some very serious talks come Monday, Tuesday, Wednesday (with congressional Democratic leaders). We have to have border security. If we don’t have border security we’re going to be crime-ridden and it’s going to get worse and worse.”

WATCH: Trump Tells Pelosi, Schumer He Will Shut Down Government Over Border Wall

Senate Majority Leader Mitch McConnell (R-Ky.) said Saturday on the Senate floor that a negotiated solution will need to be reached by 60 senators, pass through the House of Representatives and get signed by the president.

“That is what will end this regrettable episode, reopen the lapsed portions of the federal government, and produce the investment in border security that our nation really needs,” McConnell said. “So, I am glad that productive discussions are continuing at this hour between my friend the Democratic leader, the Democratic leader in the House and the White House. When those negotiations produce a solution that is acceptable to all of those parties, it will receive a vote here on the Senate floor.”

How the Shutdown Affects DHS

The law enforcement functions of DHS and its related components will remain largely unaffected by the shutdown, including the operation of the Border Patrol, Immigrations and Customs Enforcement, the U.S. Coast Guard, Transportation and Security Administration, U.S. Citizenship and Immigration Services and the Federal Emergency Management Agency, according to a DHS advisory issued on Dec. 17.

The shutdown nearly freezes the DHS Science & Technology Directorate, which remains in operation with a skeleton crew of 23 federal employees. But that doesn’t mean that cybersecurity will go unguarded throughout the shutdown. The recently founded Cybersecurity and Infrastructure Security Agency, which currently has 3,531 employees, will keep more than 2,000 on board during the appropriations lapse – although they will not be getting paid.

If @realDonaldTrump & Republicans choose to continue this #TrumpShutdown, the new House Democratic majority will swiftly pass legislation to re-open government in January.

The following functions have ceased operating:

Here’s How the Government Shutdown has Affected… 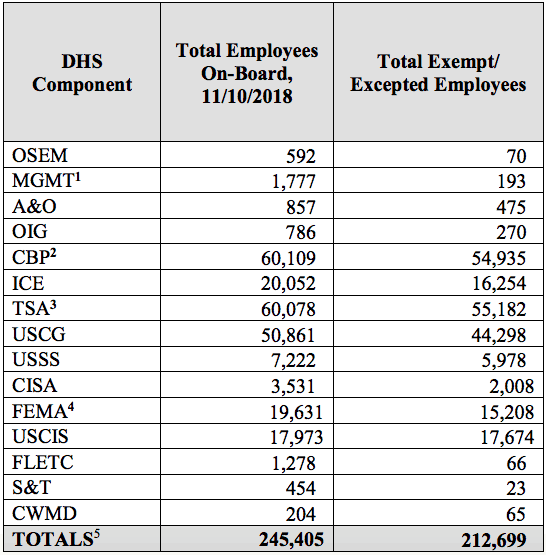 What the Shutdown Means for Contractors

DHS will not be able to ink new federal contracts until after the shutdown has ended. Federal employees who supervise any work on a contract must also stop working.

Contractors are allowed to continue on projects that do not require direct oversight from department representatives. This means that all firm, fixed-price contracts that are fully funded at the time they were awarded may continue. Much will also depend on how long the shutdown lasts.

“Depending on the duration of a funding lapse, the absence of available federal employee oversight may lead DHS to reconsider whether the contract activity should continue to be performed,” DHS notes. “In particular, if the continued oversight during the lapse period is critical to the contractor’s continued performance during that period then – where consistent with law and the terms of the contract – DHS should instruct the contractor to suspend performance.”