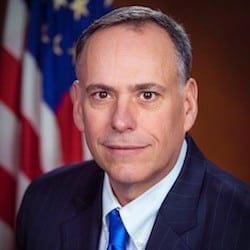 Dorobek Insider reported that the deputy CIO is believed to have died from a heart attack at age 55.

Deeley became deputy CIO in 2012, managing the CIO office internal operations as well as data center and applications delivery. He served as acting CIO for five months in 2013 until Klimavicz took over. He originally joined the agency in 1984, serving in the FBI’s Criminal Justice Information Services Division. Deeley received two Federal 100 awards for his work, in 2007 and 2014.

Dorebek Insider reports, that in an email to the Justice Management Division staff, Assistant Attorney General Lee Lofthus said, “Kevin’s good humor and positive outlook, and willingness to tackle any task no matter how daunting or complicated, were his hallmarks. He will be dearly missed. We will provide additional information on service arrangements as they are made available. Please keep Kevin’s family and friends in your thoughts and prayers during this time.”

DoJ CIO, Joseph Klimavicz, also expressed his sadness in an email to staff over the weekend: “We will feel his loss keenly in the OCIO and throughout the department. My condolences to each of you who had the good fortune of knowing Kevin and are now grieving the loss of a dear friend and an inspiring mentor.”