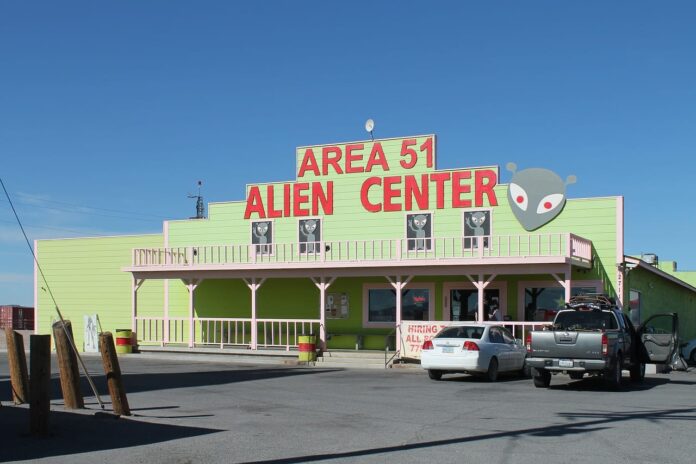 The RSVP list to “storm Area 51” has swollen to more than 2 million people, and the rural Nevada county housing the mysterious government property has signed an emergency declaration a month in advance.

The creator of the Facebook event “Storm Area 51, They Can’t Stop All of Us” has since said the page was created as a joke, but in addition to the couple of million commitments at least 1.5 million more are interested in attending. Beginning Sept. 20 at noon, the event promises, “We will all meet up in Rural Nevada and coordinate our parties. If we naruto run, we can move faster than their bullets. Lets [sic] see them aliens.” Naruto refers to leaning forward, arms extended to the rear, while running fast.

There are now more than 97,000 discussion posts on the event page, with one noting that a news report said there would be “about 230 police officers ready” at the site, or “1 police officer for every 15218 people.” A YouTube livestream has also been set to go live on Extraterrestrial Highway at 6 a.m. on Sept. 20, “filming what we will legally be allowed to film… hopefully we see some aliens ufos and what not as well.”

The Air Force responded that it would protect any military training installation from trespassers.

“The Nevada Test and Training Range is an area where the Air Force tests and trains combat aircraft,” Air Force spokesperson Laura McAndrews said in a July statement. “As a matter of practice, we do not discuss specific security measures, but any attempt to illegally access military installations or military training areas is dangerous.”

On Monday, Lincoln County, Nev., commissioners signed the emergency declaration that will allow them to reach out for state resources should Sept. 20 be more than the sprawling county of 5,000 residents can handle.

They also approved permits for two events: Alienstock at the Little A’Le’Inn in Rachel from Sept. 20-22 and the UFology Expo Sept. 20-21 at the Alien Research Center, about 45 minutes away in Hiko, the Las Vegas Review-Journal reported. Those two events are expected to draw up to 40,000 people.

“We haven’t actually set a trigger point (for declaring an emergency) yet,” said Lincoln County Commission Chairman Varlin Higbee. “We don’t know where or how far our resources are going to go. A lot of it is equipment and financing. The county only has so much money to deal with, and if you start paying a lot of money for overtime … your financing can go pretty fast.”

Higbee noted that local cell phone service will go down with that many people in the area overloading the system. Local businesses are already seeing a surge of curiosity-seekers a month ahead of the Area 51 run.

He warned visitors against trying to breach the facility. “We don’t want civilian people in contact with the military at all. That will get ugly.”