PERSPECTIVE: The Four Levels of Activist Involvement in Protest Movements

After more than 100 days of persistent demonstrations, riots, and looting, we are witnessing many U.S. cities devolve into boarded-up ghost towns during the day and war-torn disaster zones by night. The riots of 2020 have presented a multi-faceted and complex challenge for anyone seeking to maintain the rule of law and order.

For intelligence analysts, police investigators and anyone else simply trying to make sense of this never-ending cycle of violence, the most important task is to understand the groups involved: Black Lives Matter (BLM), Antifa, or various opposing groups such as the Proud Boys or Boogaloo Bois.

Both mainstream and social media have continued to shed light on this problem, but they have also served to fan the flames of unrest by misinforming, spinning, and pushing political agendas with their coverage. Because of this, the line that separates peaceful protests and violent anarchists has blurred to the point that these groups now seem indistinguishable from each other. While many of these groups operate in decentralized cells or chapters, the notion that they cannot be patterned, predicted, and preempted is simply false.

As I cover in my recent book, every threat group can be profiled and analyzed according to a common set of components. One of the most critical components to understand about these political radicals lies in analyzing how they sustain and support themselves (i.e., where do they get their funding, transportation, recruits, and even the public support and sympathy for their actions?).

One helpful analytic technique is to lay out a group’s sustainment and logistic activities according to four levels of involvement. As shown in the diagram, each level has its own distinct set of members and corresponding activities: 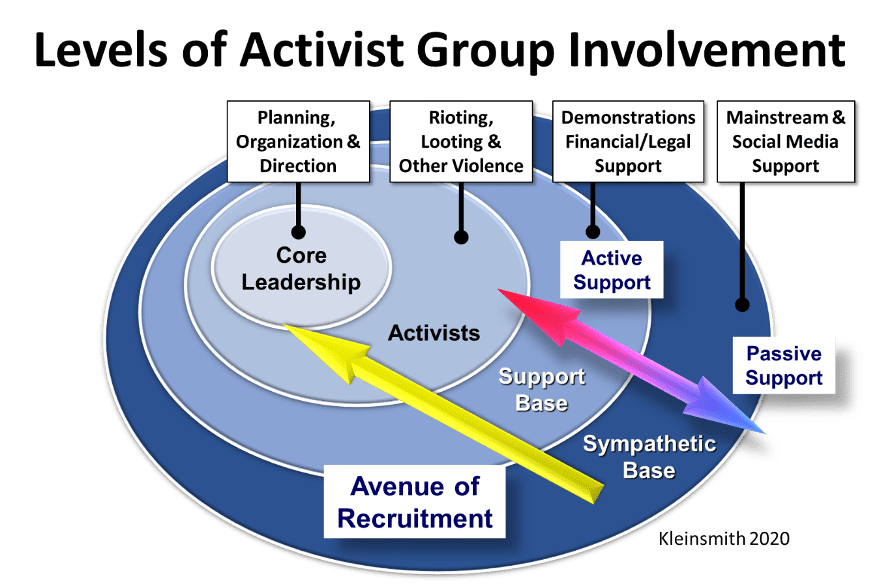 While a group like BLM or Antifa may have thousands of active and passive members, the smallest subset of their active members is their core leadership. These can be either their national organizers, chapter or cell leaders, or simply their tactical leaders, agitators, and crowd motivators on the street.

Some groups may have national founders and representation like BLM while others may rely almost exclusively on independent or semi-autonomous chapters or cells. BLM may claim that they are a decentralized movement, but they differ from other prominent groups like Antifa in that they are actually incorporated with a centralized founding and leadership structure.

For other groups like the Boogaloo Bois or Antifa, the lack of a national leadership structure requires analysis and understanding of their universal guiding principles and applying that to each chapter’s organization and actions more specifically. These groups may differ in size and overarching ideology, but their methods and structure within these four levels follow similar patterns.

The core leadership, along with their activists in the next level of involvement, are the foot soldiers of their respective movements. These are the actual “card-carrying” members who have either gone through some sort of recruitment or screening process and have pledged themselves to the group. These two levels are distinct from their supporters and sympathizers as they are the ones who have crossed the threshold of conducting operations, including violence and other illegal activities.

Understanding group membership is important, but the most insightful analysis about political radical groups can often be learned from those who aren’t members of the group at all (i.e., their supporters and sympathizers). The relative size of these two levels actually dwarf the size of the leaders and activists in terms of numbers of people and it is in these areas where analysis will find an entire set of strengths and weaknesses about the organization in question.

Support and sympathetic activities include the active and passive, legal and illegal, and even the witting and unwitting. For example, those who march, protest, or post support on social media for the Black Lives Matter movement, may not know about or entirely agree with the doctrine of Black Lives Matter – the activist political organization – which includes some previously known socialist and Marxist principles. Regardless, their participation provides critical moral or sympathetic support to the group as a whole. And whether they know it or not, those celebrities or politicians who donate to the bailout and legal defense of political radical groups have jumped from passive to active supporters no matter how much they may disagree with the violence conducted by the most ardent radicals of that group.

For law enforcement and others who seeking answers in how these groups operate, understanding the four levels of involvement also requires how sustainment and logistical operations function within each of them. This includes both the short- and long-term aspects of funding, communications, transportation, weaponization, recruitment, and training.

For example, you can deal with the violence of today’s activists, but tomorrow’s members are currently sitting in the outer two levels of involvement. Recruitment of new members requires identifying those whose ideology and predispositions is already in line with the group. They only need to be accessed, weighed, hardened, and admitted to increase their ranks.

Conversely, once a group’s recruitment, funding, and logistical support dries up, the group itself can no longer sustain itself and ceases to exist. Law enforcement strategies to quell unrest in a particular city can be successful in the short term, but until a long-term plan is implemented to delegitimize, interdict violent offenders, and enforce the rule of law, the most violent and radical wings of these groups will continue to prosper and commit the heinous crimes we see today unabated. Even in this case, each level of involvement will require a different plan that goes far beyond simply identifying and arresting perpetrators of violence.