Railroads Can Teach Utilities How to Stop Causing Fires

The wildfire menace of a century ago is forgotten by most. Even compared to the current wildfire situation, the scale of loss then was enormous. Deadly and destructive fires were regularly killing hundreds, even thousands, of people and destroying whole towns and forests. Part of the solution then was eliminating railroads as a major cause of wildfires. We are now faced by similar problem: How do we eliminate powerlines as a major cause of disastrous fires?

This is a technical problem. This is not lightning. This is not arson or campfires. Smokey Bear cannot solve this. This is a problem that can be fixed only through technology and maintenance. We can look back to a period between 1870 to 1918 and see the similar menacing problem of fires being started by another engine of progress: railroads. Railroads were one of the common causes of wildfires. Smokestacks and brake shoes failing, along with bad vegetation clearance practices for new tracks, were starting catastrophic fires. 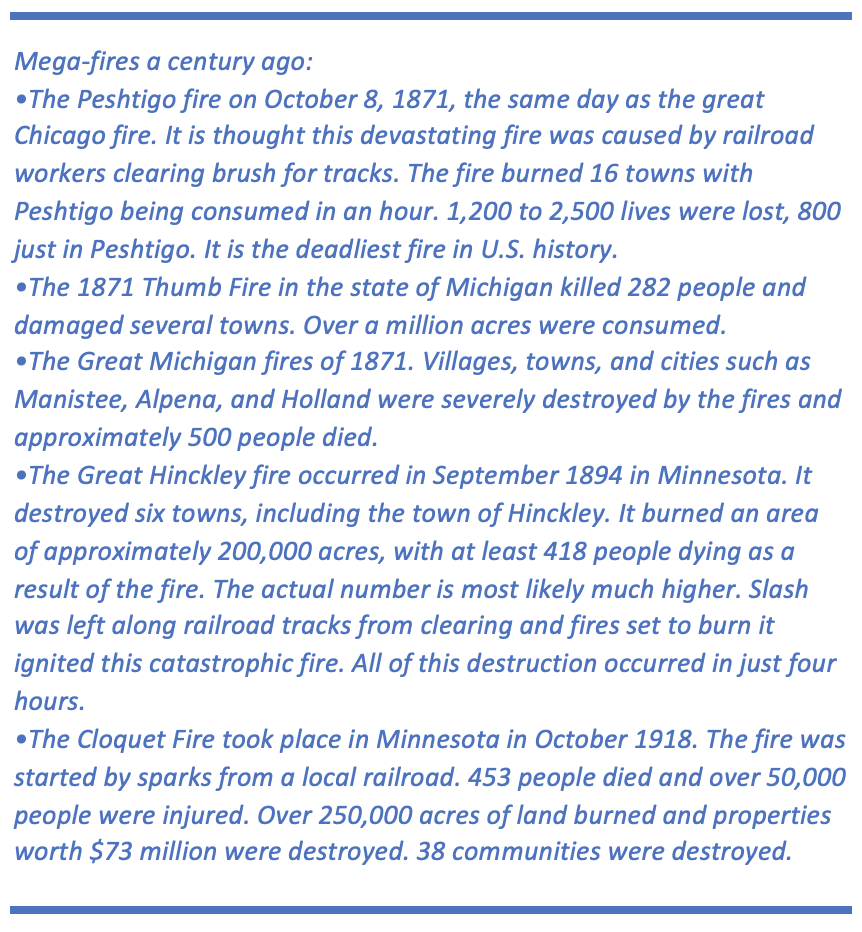 While the name is new, mega-fires are not. What is new is that they are occurring now after we thought we had reached a time where we could prevent and control wildfires so that we didn’t feel like we were at war every fire season. A hundred-plus years ago a lack of regulations about burning, forest practices and misuse of equipment, created the perfect equation for disastrous wildfires. It was not until concerted effort of instituting sound engineering, regulation, enforcement and organized fire control had fully matured did the level of destruction reach a tolerable level that we grew to expect. But how after all the effort we have put into taming this “Dragon Devastation,” as Gifford Pinchot, the first chief of the U.S. Forest Service, labeled it, we once again are faced with it?

This time climate change has changed the equation. The regulations, technology and firefighting of the past are no longer adequate. The solution is to use the same principles to solve the problem that were used during the last period of mega-fires, starting with eliminating powerline-caused fires.

After the civil war as the railroad was making its expansion west, they were starting many deadly and destructive wildland fires. In all ways, the fires that occurred over a century ago eclipse the current wildfire disasters we are now having. Like the electrical grid, the railroad tracks being laid were running across areas of brush and timber from one town to the next. Dr. Stephen J. Pyne, fire historian at Arizona State University, describes in Fire in America how locomotives were notorious fire starters: “a single faulty locomotive could ignite fires over miles of landscape.” By the 1880s locomotives were one of the leading causes of fires. “The use of wood fuel guaranteed that the train would belch an endless eruption of firebrands from its smokestack. The substitution of coal for wood and, under the pressure of early regulation and lawsuit, the maintenance of rights-of-way and the use of spark arresters brought some improvements.”

More regulation and enforcement continued to be instituted. Railroads even created suppression gangs, lookouts, patrols and fire trains specifically designed to fight fire with water tanks, equipment and pumps. If a railroad starts a fire in California, regardless of why it started, it is a “rebuttable presumption of negligence,” a misdemeanor. The answer was not stopping train service to prevent fires; that would have caused unacceptable economic destruction, just as turning the power off is now.

While trains still cause the occasional fire, regulations and technological improvements have eliminated railroads as a leading cause of fires. How did the railroad industry tame this problem? By recognizing the railroad fire problem was basically composed of two parts: risks and hazards.

Risks are the sources of ignition. The two most common of these were exhaust carbon particles and brake shoe fragments. Others included burning slash piles, grinding, cutting and welding.

Hazards are the flammable materials that may be ignited by the various risks. Removing dry vegetation and material near areas where ignitions could occur eliminated the ability for a fire to grow.

Ninety percent of all fires are anthropogenic, meaning human-caused as opposed to lightning-caused. Although less than 10 percent of all fires are caused from powerlines, the death and devastation these specific fires have caused has created a visceral fear and a legal and political backlash not seen since the railroad-caused fires of the past. Their equipment is failing and when it does it is starting devastating fires. Four out of the top 20 most destructive California fires were caused from powerlines.

While the electrical utilities, like the railroads, are regulated and have advanced new technologies, the regulations and the installation of those technologies have not kept up with climate change. Regulations and enforcement are currently not adequate for the gale force winds of a Diablo or Santa Ana wind. The electrical utilities’ approach needs to look at today’s Risks and Hazards with a stated goal of eliminating most powerline ignitions. This must occur in an acceptable amount of time. Improve the equipment so it will not fail and, when it does, ensure there is not a receptive fuel bed for and ignition to spread. The utilities are already creating some suppression forces, including crews in pickup trucks fitted with water and pumps and helicopters capable of dropping water on fires so when an ignition occurs near their equipment, they can keep it from spreading. Risk and Hazard mitigations should first focus on the areas that have a history of powerline caused fires and areas that will eliminate the need for Public Safety Power Shutoffs (PSPS) to the greatest number of people. A timeline needs to be provided to all customers to let them know when the power grid will be fixed and PSPS will be a thing of the past. Ten years is not acceptable.

The irony is that when the railroads were causing catastrophic fires, they were also important in heroically transporting the evacuees out of the area and bringing in firefighters, equipment and emergency supplies for the survivors. Now the irony is that the electrical utilities, who have caused many of the recent devastating fires, are also important in providing critical electricity to cellular providers who are needed for emergency alerting to evacuate, supplying power to water pumps for firefighting and ensuring evacuation shelters are powered to provide lights, clean air and air conditioning. The utilities are expert and move with lightning speed to repair destroyed powerlines so our communities can get the lights back on. They, like the railroad workers of the past, also bravely endure the fires elements to do that.

Engineers believe you can engineer away all risks. Firefighters believe if humans built something it will fail, and you will call 911. The combined efforts of engineers and firefighters together is what makes the world safer. The firefighters are doing their part; now it is time for the engineers at the utilities to determinedly focus on this issue and fix the power grid.

Facing the Fires of a Meltdown