The campaign was formalized in 1988 by the National Family Partnership, with President and Mrs. Reagan serving as honorary chairpersons. 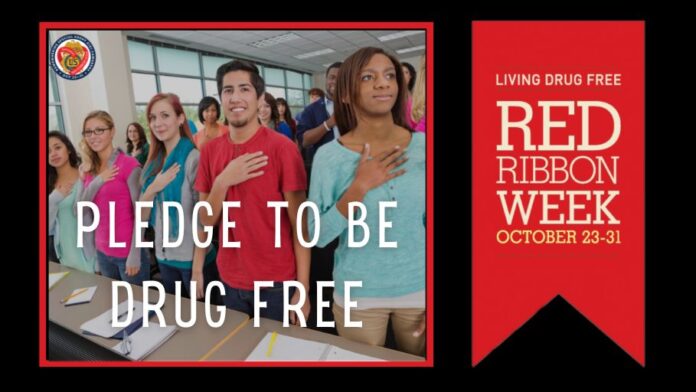 Today begins Red Ribbon Week, which raises awareness of drug use and the problems related to drugs facing our community, and encourages parents, educators, business owners, and other community organizations to promote drug-free lifestyles.

Enrique (Kiki) S. Camarena was born on July 26, 1947, in Mexicali, Mexico. He graduated from Calexico High School in Calexico, California in 1966, and in 1968 he joined the U.S. Marine Corps. After serving in the Marine Corps for two years, Kiki was a Calexico fireman, Calexico police officer, and an Imperial County Deputy Sheriff. Kiki joined the Drug Enforcement Administration in June of 1974. His first assignment as a Special Agent with DEA was in a familiar place – Calexico, California.

In 1977, after three years in Calexico, he was reassigned to the Fresno District Office in Northern California. Four years later, Kiki received transfer orders to Mexico, where he would work out of the Guadalajara Resident Office. For more than four years in Mexico, Kiki remained on the trail of the country’s biggest marijuana and cocaine traffickers. In early 1985, he was extremely close to unlocking a multi-billion dollar drug pipeline. However, before he was able to expose the drug trafficking operations to the public, he was kidnapped on February 7, 1985. On that fateful day, while headed to a luncheon with his wife, Mika, Kiki was surrounded by five armed men who threw him into a car and sped away. That was the last time anyone but his kidnappers would see him alive.

It is believed that Special Agent Camarena’s death actually occurred two days later, but his body was not discovered until March 5, 1985. He was 37 years old and was survived by his wife Mika and their three children—Enrique, Daniel, and Erik. During his 11 years with DEA, Kiki received two Sustained Superior Performance Awards, a Special Achievement Award and, posthumously, the Administrator’s Award of Honor, the highest award granted by DEA.

Red Ribbon Week eventually gained momentum throughout California and later across the United States. In 1985, club members presented the “Camarena Club Proclamation” to then First Lady Nancy Reagan, bringing it national attention. Later that summer, parent groups in California, Illinois, and Virginia began promoting the wearing of red ribbons nationwide during late October. The campaign was then formalized in 1988 by the National Family Partnership, with President and Mrs. Reagan serving as honorary chairpersons. Today, the eight-day celebration is an annual catalyst to show intolerance for drugs in our schools, workplaces, and communities. Each year, on October 23-31, more than 80 million young people and adults show their commitment to a healthy, drug-free lifestyle by wearing or displaying the red ribbon.

See ways you can get involved at DEA