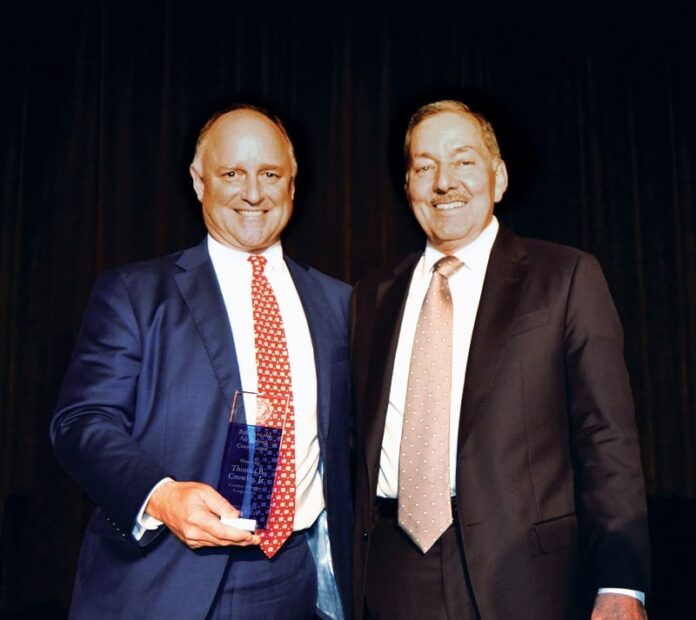 The Coast Guard Foundation, a non-profit organization committed to the education and welfare of all Coast Guard members and their families, recently recognized Chairman and CEO Tom Crowley Jr. and Crowley Maritime Corporation for more than 30 years of support at its 25th Tribute to the Coast Guard Seventh District event in Fort Lauderdale, Fla. The event, originally scheduled for late January but postponed due to the partial government shutdown, was held April 18.

The rescheduled date did nothing to dampen spirits, as the function was one of the most successful in recent memory – with more than 400 people in the crowded ballroom at the Pier Sixty-Six Hotel and Marina. Approximately $380,000 was raised that evening to support Coast Guard Foundation programs and initiatives that provide education, morale and relief support for Coast Guard members and families.

“In addition to supporting events like this one in Fort Lauderdale, Crowley has contributed to our scholarship program, Fallen Heroes Fund and morale programs all across the country,” said Will Jenkins, Coast Guard Foundation board chairman. “For all of this and so much more, we would like to offer Tom and the entire Crowley Maritime organization this well-deserved recognition and our deepest thanks.”

In honoring Crowley, the foundation noted the company’s large-scale response to Puerto Rico after its devastation by Hurricane Maria. Within two hours of the Coast Guard reopening the island’s main port in San Juan, a Crowley vessel arrived and began discharging critical commercial and relief cargoes. Over the next 182 days, Crowley unloaded more than 200 vessels with cargo consisting of nearly 40,000 commercial loads and 8,000 Federal Emergency Management Agency (FEMA) loads, including food, water and humanitarian supplies as well as thousands of electrical transformers and poles; and 10 million miles of power line. That mission was accomplished by 300 Puerto Rico employees, themselves reeling from the hurricane.

“The men and women of our entire company and I are honored to receive this recognition from the Foundation,” Crowley said. “We also appreciated the organization’s constant support of the men and women serving our nation in the U.S. Coast Guard. The U.S. Merchant Marine can depend on the Coast Guard every day, and we applaud the great support by the Foundation to those who ensure safety and security on our nation’s waters and ports.”

Crowley has led the company since 1994, succeeding as CEO his father and grandfather in leadership dating back to the company’s founding in 1892. The company is a U.S.-based, $2 billion-a-year marine solutions, energy and logistics services company with operations around the world.

At the event, the Foundation also presented an award to the Rescue Coordination Center Miami and an aircrew from Air Station Clearwater. The brave individuals were recognized for their rescue of 28 fishermen who were forced to abandon their 131-foot commercial fishing vessel when it became fully engulfed in a destructive onboard fire.