Improving the Efficiency of Port Detection Systems Without Compromising Effectiveness 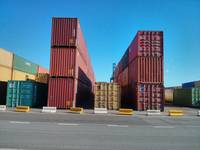 With the proliferation of global terror threats since the 9/11 attacks, screening for radioactive material has dramatically increased. This threatens to cause bottlenecks in international commerce unless nuisance alarms can be reduced, allowing legitimate goods to pass checkpoints without secondary screening.

In the US, RPMs are installed at seaports, land border ports of entry, and crossings, including rail crossings, international airports, and international mail and express consignment courier facilities, in an effort to screen 100 percent of all incoming goods, people, and conveyances for radiation.

Unlike X-ray systems, RPMs do not produce images of the object being scanned. Instead, they are passive devices that detect and quantify certain types of radioactive energy from sources that pass close by them. Being passive, RPMs do not emit any radiation at all. They are, therefore, completely safe, and, as a result, are common in hospitals where they are used to ensure that radioactive materials are not improperly removed from the building.

The challenge of nuisance alarms

However, not all radioactive material poses a threat and this is where a key weakness of current systems lies. All around us, there are naturally occurring radioactive materials (NORMs) in everyday items including porcelain, stoneware, granite, and even tobacco and cat litter. The presence of any of these items can lead to a high level of radiation being detected and reported by the RPM. These are not ‘false’ alarms, since the radiation detected is real, but they are ‘nuisance’ alarms as these everyday items are clearly not a security threat.

The earliest RPMs were relatively simple devices used mainly within the steel industry. These large volume polyvinyl-toluene (PVT) scintillation counters were placed at the entrance to the steel re-processing works to screen all incoming scrap. In this scenario, the cargo should be entirely steel without any radioactive material. The RPMs were effective and efficient in this application, rejecting all loads with detectable radiation, whether or not it was NORM. These systems efficiently detect orphan sources of radiation, NORM such as zircon sand or refractory materials, contaminated high value scrap from countries with poorly regulated nuclear industries, and imported steel that is already contaminated.

To give some scale to the nuisance alarm challenge, when RPMs are used by US Customs and Border Protection (CBP), there are close to 20 million containers imported into the US each year. Between 2-4 percent of containerized cargo contains NORM that can trigger a radiation alarm, which means that there are between 400,000 and 800,000 containers where CBP has to move the container to secondary screening for further investigation to identify the radiation source. At this screening, strict protocols are followed to determine whether the source of radiation is a potential terrorist threat, a NORM, a source out of regulatory control, or some other valid radiation source.

The issue is not that threats are being missed – it is a simple effectiveness verses efficiency concern. The systems are effective, but they are not efficient. The time, effort, and manpower required to perform secondary screening on up to 800,000 containers each year is a huge cost to the US Government, as well as the shippers and taxpayers, and has a significant impact on the flow of commerce.

The search for alternative solutions

In 2006, the US Department of Homeland Security (DHS) embarked on a program to develop a next generation system that would overcome the limitations of existing PVT systems. A technical weakness of standard PVT systems is their inability to provide good quality information on the energy of the detected photons, and so provide source identification. Although PVT systems can provide a degree of energy discrimination, without the necessary source identification, the levels of nuisance alarms could not be managed to an acceptable level.

The Advanced Spectroscopic Portal (ASP) program began to look at alternative technologies, including: Sodium-Iodide (NaI) scintillating crystals and high purity Germanium (HPGe) based solutions. These systems have the potential for better energy discrimination than PVT systems; however, they have significantly higher lifecycle costs, particularly HPGe detectors, which need to be cooled to around -280ºF (-175ºC). For instance, the lifecycle cost of these new high performance cargo portals was estimated to be $822,000 compared to $308,000 for the standard PVT version. Ultimately, the program was terminated in 2011 before completion, since it was not feasible to deploy 1400 of these advanced RPMs, as originally envisioned.

As the early PVT systems in the US approach end-of-life, US/UK-based firm Symetrica recently outlined a proprietary new three-aspect approach to the challenge of improving discrimination in established and relatively inexpensive PVT-based RPM technology.

This new approach includes (i) patented advanced spectroscopic analysis algorithms, (ii) enhanced detector design, and (iii) accurate gain stabilization and health monitoring. The result is a substantial improvement in discrimination and the elimination of up to 95 percent by commodity of nuisance alarms.

PVT detectors have no discernible full energy peaks in the gamma spectral range of interest, making refined energy discrimination difficult; however crude spectroscopic information is available from other features in the spectrum. Symetrica’s patented proprietary analysis algorithms and enhanced detector designs increase the spectroscopic information available for isotope classification and identification. These algorithms reconstruct the most likely incident spectra for a given raw spectrum and achieve results that are comparable to those seen with the much higher cost crystal detectors.

Another critical aspect of any spectroscopic portal is calibration. Symetrica has implemented a proprietary stabilization and health monitoring system that automatically measures the detection performance of the system at all times. This system automatically maintains the gain and resolution parameters of the detection chain, including the scintillator. This system is continuously operational and is not affected by rapid changes in the background or sources transiting the portal. The sensitivity is monitored continuously without the need to bring test sources to the RPM and provides new levels of performance information throughout the operating lifetime of the system. This allows the operator to be certain that the system is operating with optimum performance at all times, provides a measurement of the capability at the point of measurement and eliminates the need for scheduled manual re-calibration, which is a significant contributor to lifecycle cost. This is the same low maintenance approach that has been successfully deployed in the next generation of handheld systems that are currently in deployment with the DNDO.

During 2013, a Symetrica advanced PVT RPM that had been previously tested successfully against threat sources in the ITRAP+10 test campaign was deployed in Antwerp to demonstrate the new solution. This new PVT system was deployed in line with an existing PVT portal and Symetrica’s NaI solution. During the test over 125,000 cargo transits were recorded. There were 2,359 cargo transits that alarmed on all three systems and this data was analyzed in more detail.

Of the 2,359 transit alarms, 11 were due to medical sources. The Symetrica advanced PVT RPM detected all of the medical transits and classified over 90 percent of these correctly as medical – the one detected but not classified was a source that had decayed to a very low level. The Symetrica NaI solution identified 100 percent as the correct medical isotope.

The remaining 2,348 transits contained a total of 83 types of NORM commodity with nine common commodities making up over 85 percent of the cargos. From these 2,348 transits containing NORMs, the Symetrica advanced PVT RPM correctly classified 1,969 (83.9 percent) as non-threatening. The performance for some commodities exceeded this, for example 95 percent of tobacco loads were correctly classified as NORM. This is almost as good as the Symetrica NaI solution that identified 99.2 percent of all the transits correctly without referral.

Following the successful testing, Symetrica’s technology has been installed operationally in a major European port and airport. If this success were to be replicated in the USA the new advanced PVT RPM could eliminate as many as 670,000 unnecessary screenings per year – leading to a huge cost saving and improvement in the flow of goods into the country. The combination of advanced PVT primary systems with an intermediary Symetrica NaI referral system could reduce the current 800,000 secondary inspections to between 1000 and 6500 operations.

Matthew Dallimore is Co-Founder and Technical Director of Symetrica Inc.