Monkeypox Outbreak: WHO Says 99 Percent of Cases with Demographic Info Are Men

The unexpected appearance of monkeypox in several regions suggests that there may have been undetected transmission for some time.

This current Disease Outbreak News on the multi-country monkeypox outbreak is an update to the previously published Disease Outbreak News of 10 June, with updated data, some further details on surveillance and reporting, One Health, gatherings, Risk communication and community engagement and International travel and points of entry.

In this edition, we are removing the distinction between endemic and non-endemic countries, reporting on countries together where possible, to reflect the unified response that is needed.

Outbreak at a glance

Since 1 January 2022, cases of monkeypox have been reported to WHO from 42 Member States across five WHO regions (the Regions of the Americas, Africa, Europe, Eastern Mediterranean, and Western Pacific). As of 15 June, a total of 2103 laboratory confirmed cases and one probable case, including one death, have been reported to WHO. The outbreak of monkeypox continues to primarily affect men who have sex with men who have reported recent sex with new or multiple partners.

While epidemiological investigations are ongoing, most reported cases in the recent outbreak have presented through sexual health or other health services in primary or secondary health care facilities, with a history of travel primarily to countries in Europe, and North America or other countries rather than to countries where the virus was not historically known to be present, and increasingly, recent travel locally or no travel at all.

Confirmation of one case of monkeypox, in a country, is considered an outbreak. The unexpected appearance of monkeypox in several regions in the initial absence of epidemiological links to areas that have historically reported monkeypox suggests that there may have been undetected transmission for some time.

WHO assesses the risk at the global level as moderate considering this is the first time that many monkeypox cases and clusters are reported concurrently in many countries in widely disparate WHO geographical areas, balanced against the fact that mortality has remained low in the current outbreak.

Between 1 January to 15 June 2022, a cumulative total of 2103 laboratory confirmed cases, one probable case, and one death have been reported to WHO from 42 countries in five WHO Regions. The majority of cases (98%) have been reported since May 2022 (Figure 1). 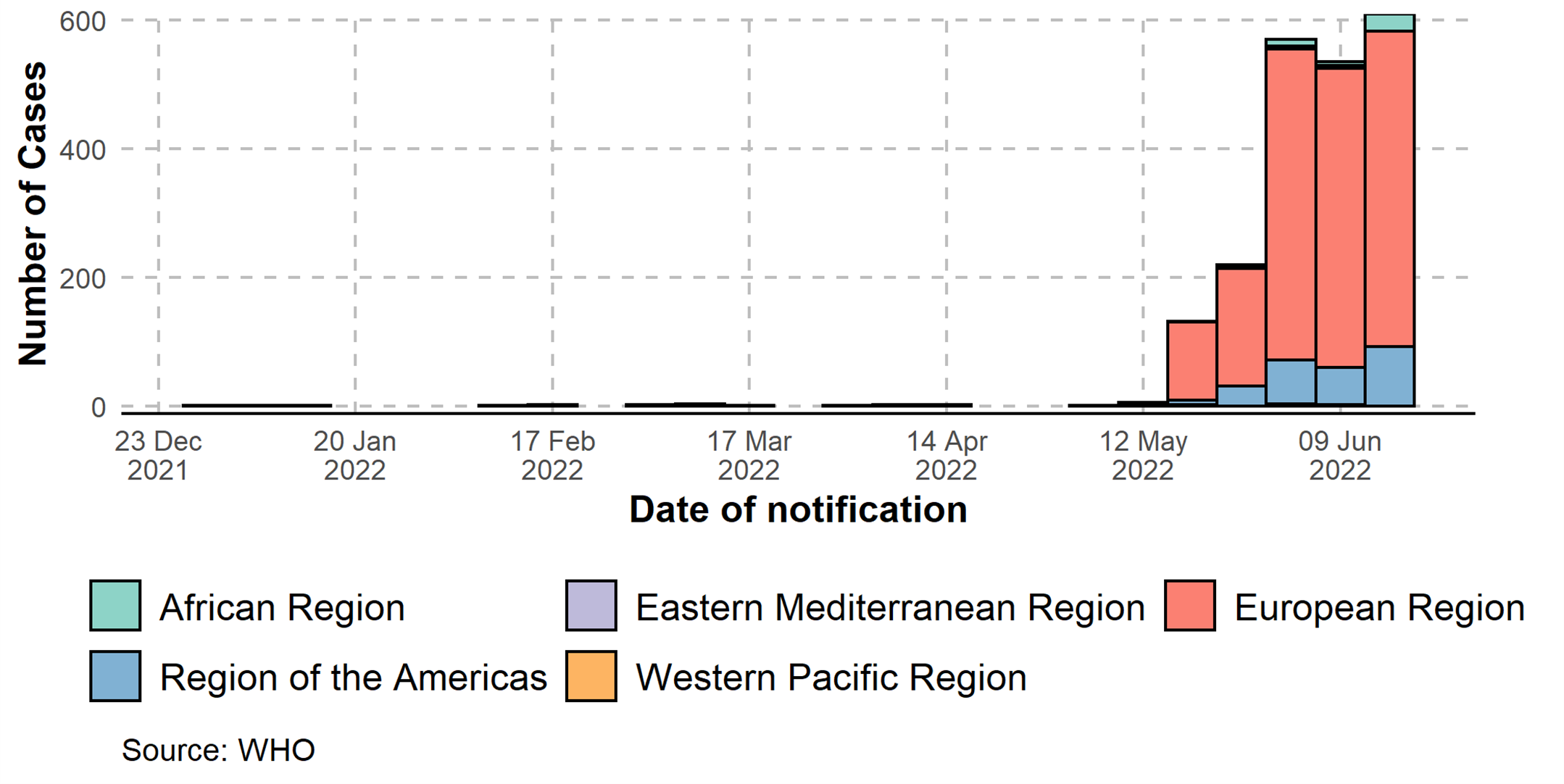 Note: the data for the current epi week are incomplete and should be interpreted cautiously.

The majority (84%) of confirmed cases (n=1773) are from the WHO European Region. Confirmed cases have also been reported from the African Region (n=64; 3%), the Region of the Americas (n=245; 12%), Eastern Mediterranean Region (n=14; <1%) and Western Pacific Region (n=7; <1%). Of cases reported (468 out 2103 confirmed cases) from 14 countries for which demographic information and personal characteristics are available, 99% are reported in men aged 0 to 65 years (Interquartile range: 32 to 43 years; median age 37 years), of which most self-identify as men who have sex with other men.

Figure 2 and Table 1 show the number of cases of monkeypox by country, reported to or identified by WHO from 1 January through 15 June 2022, 5 PM CEST.

The case count is fluctuating as more information becomes available and data are verified under the International Health Regulations (IHR 2005).

Figure 2. Geographic distribution of cases of monkeypox reported to or identified by WHO from official public sources, between 1 January and 15 June 2022, 5 PM CEST, (n=2103). 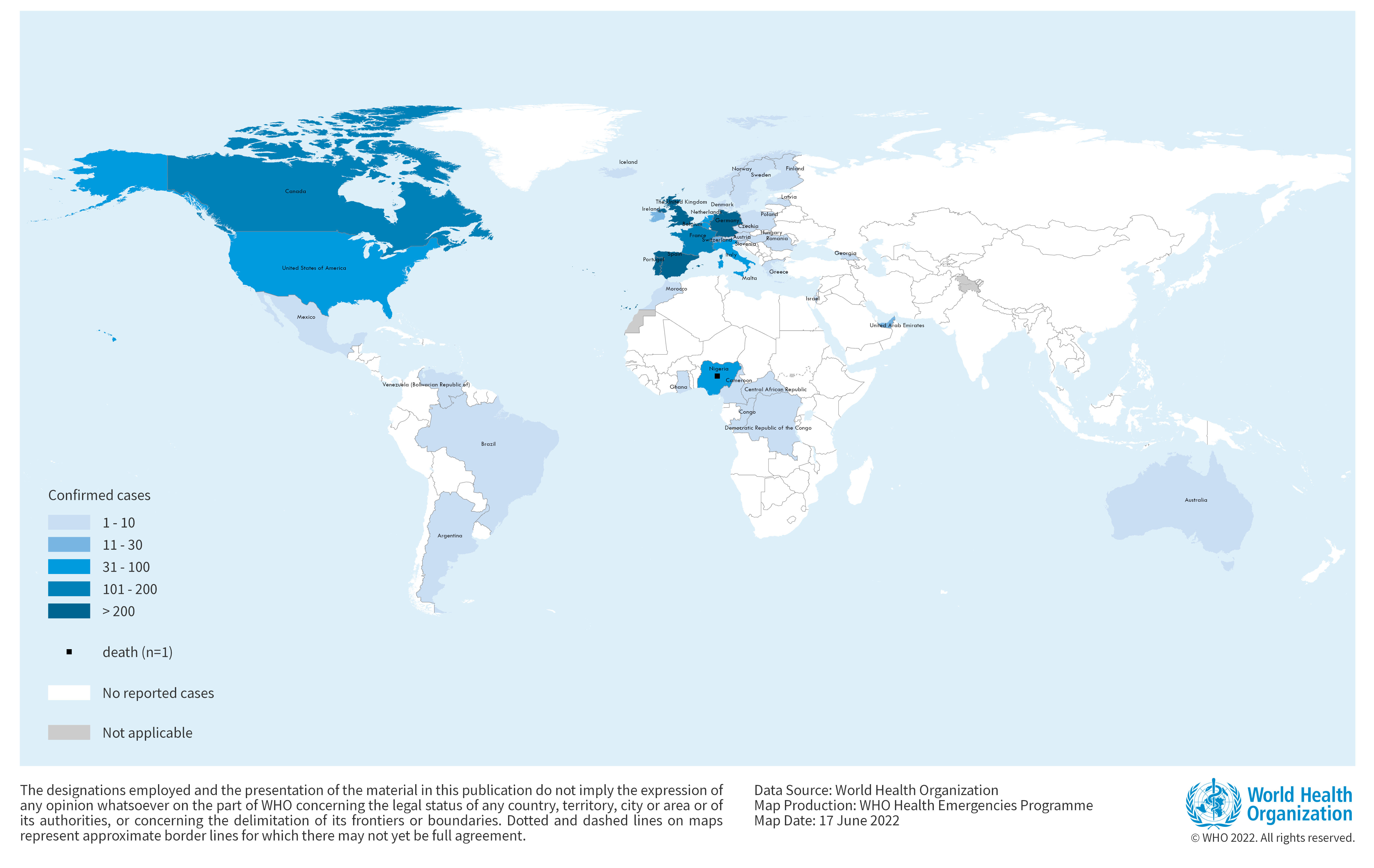 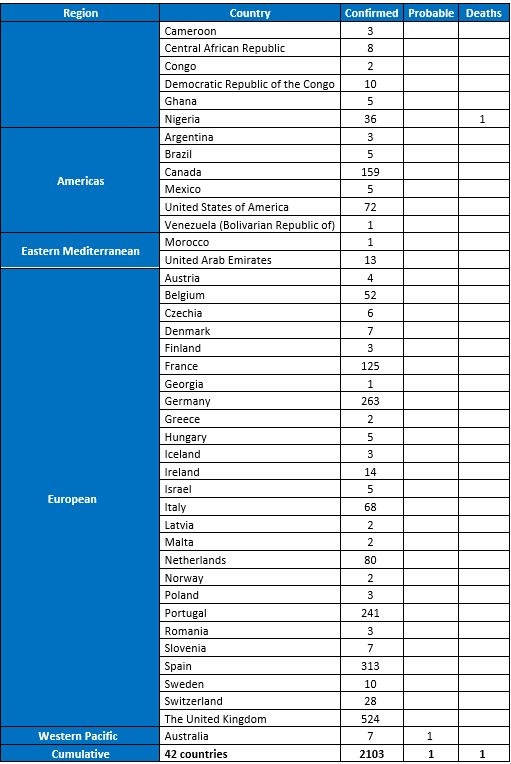 To date, the clinical presentation of monkeypox cases associated with this outbreak has been variable. Many cases in this outbreak are not presenting with the classically described clinical picture for                monkeypox (fever, swollen lymph nodes, followed by a centrifugal evolving rash). Atypical features described include: presentation of only a few or even just a single lesion; lesions that begin in the genital or perineal/perianal area and do not spread further; lesions appearing at different (asynchronous) stages of development; and the appearance of lesions before the onset of fever, malaise and other constitutional symptoms. The modes of transmission during sexual contact remain unknown; while it is known that close physical and intimate skin-to-skin or face-to-face contact can lead to transmission (through direct contact with infectious skin or lesions), it is not clear what role sexual bodily fluids, such as semen and vaginal fluids, play in the transmission of monkeypox.

WHO continues to support sharing of information. Clinical and public health incident response has been activated by Member states to coordinate comprehensive case finding, contact tracing, laboratory investigation, clinical management and isolation and implementation of infection and prevention and control measures.

The ACAM-2000 and MVA-BN vaccines are being deployed by some Member States to manage close contacts. Others may hold supplies of LC16 or other vaccines.

Interim guidance is being or has been developed to support Member States with raising awareness; surveillance, case investigation and contact tracing; laboratory diagnostics and testing; clinical management and infection prevention and control (IPC); vaccines and immunization; and risk communication and community engagement (please refer to the WHO Guidance and Public Health Recommendations section below).

Currently, the public health risk at the global level is assessed as moderate considering this is the first time that monkeypox cases and clusters are reported concurrently in many countries in widely disparate WHO geographical areas, balanced against the fact that mortality has remained low in the current outbreak.

In apparently newly affected countries, cases have mainly, but not exclusively, been confirmed amongst men who self-identify as men who have sex with men, participating in extended sexual networks. Person to person transmission is ongoing, still primarily occurring in one demographic and social group. It is likely that the actual number of cases remains an underestimate. This may in part be due to the lack of early clinical recognition of an infectious disease previously thought to occur mostly in West and Central Africa, a non-severe clinical presentation for most cases, limited surveillance, and a lack of widely available diagnostics. While efforts are underway to address these gaps, it is important to remain vigilant for monkeypox in all population groups to prevent onward transmission.

At present, transmission in apparently newly affected countries is primarily linked to recent sexual contacts. There is the high likelihood that further cases will be found without identified chains of transmission, including potentially in other population groups. Given the number of countries across several WHO regions reporting cases of monkeypox, it is highly likely that other countries will identify cases and there will be further spread of the virus. Human-to-human transmission occurs through close or direct physical contact (face-to-face, skin-to-skin, mouth-to-mouth, mouth-to-skin) with infectious lesions or mucocutaneous ulcers including during sexual activity, respiratory droplets (and possibly short-range aerosols), or contact with contaminated materials (e.g., linens, bedding, electronics, clothing, sex toys).

The current risk for the general public remains low. There is a risk to health workers if they are in contact with a case while not wearing appropriate personal protective equipment (PPE) to prevent transmission; though not yet reported in this current outbreak, the risk of health care-associated infections has been documented in the past. Should monkeypox begin to spread more widely to and within more vulnerable groups, there is the potential for greater health ­­­impact as the risk of severe disease and mortality is recognized to be higher in immunocompromised individuals, including persons with poorly controlled HIV infection. While infection with monkeypox during pregnancy is not fully understood, limited data suggest that infection may lead to adverse outcomes for the foetus or newborn infant and for the mother.

To date, all cases identified in newly affected countries whose samples were confirmed by PCR have been identified as being infected with the West African clade. There are two known clades of monkeypox virus, one first identified in West Africa (WA) and one in the Congo Basin (CB) region. The WA clade has in the past been associated with an overall lower case fatality ratio (CFR) of <1% while the CB clade appears to more frequently cause severe disease with a CFR previously reported of up to about 10%; both estimates are based on infections among a generally younger population in the African setting. In the period following the eradication of smallpox, more people were immune to orthopoxviruses through exposure to smallpox or receipt of smallpox vaccine. Therefore, initially most early cases of human monkeypox were among children who were vulnerable and therefore at risk of more severe disease.

Vaccination against smallpox was shown in the past to be cross-protective against monkeypox. Today, any continuing immunity from prior smallpox vaccination would in most cases only be present in persons over the age of 42 to 50 years or older, depending on the country, since smallpox vaccination programmes ended worldwide in 1980 after the eradication of smallpox. Protection for those who were vaccinated may have waned over time. The original (first generation) smallpox vaccines from the eradication programme are no longer available to the general public.

Smallpox and monkeypox vaccines, where available, are being deployed in a few countries to manage close contacts. Second- and third-generation smallpox vaccines have been developed to have an improved safety profile and one has been approved for prevention of monkeypox. This vaccine is based on a strain of vaccinia virus (known generically as modified vaccinia Ankara Bavarian Nordic strain, or MVA-BN). This vaccine has been approved for prevention of monkeypox in Canada and the United States of America. In the European Union, this vaccine has been approved for prevention of smallpox under exceptional circumstances. An antiviral agent, tecovirimat, has been approved by the European Medicines Agency, Health Canada, and the United States Food and Drug Administration for the treatment of smallpox. It is also approved in the European Union for treatment of monkeypox. WHO has convened experts to review the latest data on smallpox and monkeypox vaccines, and to provide guidance on how and in what circumstances they can be used.