One Monkeypox Death and 50-Country Spread Reported by WHO

While it is known that close physical contact can lead to transmission, it is unclear whether sexual transmission via semen/vaginal fluids occurs.

This Disease Outbreak News on the multi-country monkeypox outbreak is an update to the previously published editions and provides an update on the epidemiological situation, further information on the use of therapeutics, as well as on the outcomes of the International Health Regulations (2005) Emergency Committee regarding the multi-country monkeypox outbreak held on 23 June.

Outbreak at a glance

Since 1 January and as of 22 June 2022, 3413 laboratory confirmed cases and one death have been reported to WHO from 50 countries/territories in five WHO Regions.

Since the previous Disease Outbreak News of 17 June was published, 1310 new cases have been reported and eight new countries have reported cases.

The case count is expected to change as more information becomes available daily and data are verified under the International Health Regulations (2005) (IHR 2005) (Table 1).

Figure 1. Geographic distribution of confirmed cases of monkeypox reported to or identified by WHO from official public sources, between 1 January and 22 June 2022, 17:00 CEST, (n=3413) 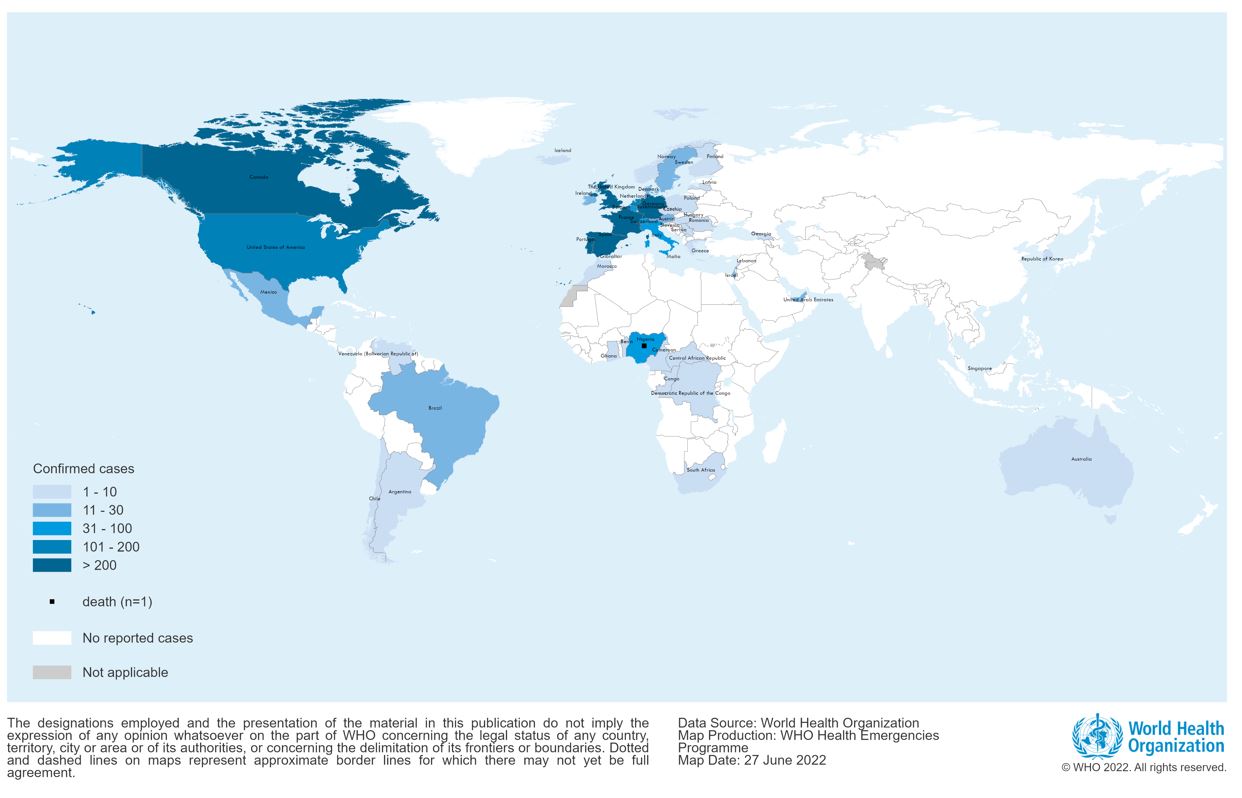 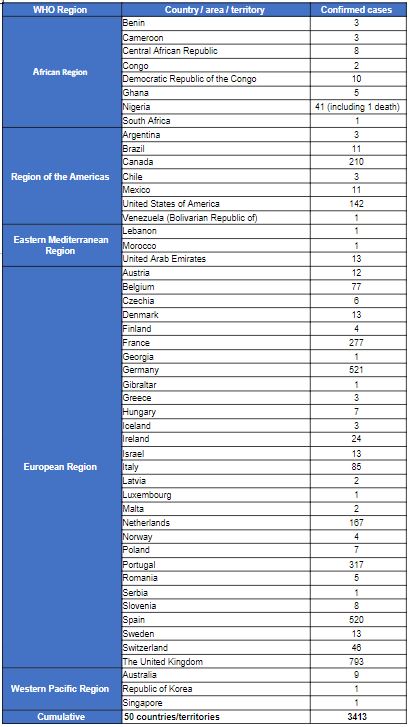 WHO continues to closely monitor the situation, and support international coordination and information sharing with Member States and partners. Clinical and public health incident response have been activated by Member States to coordinate comprehensive case finding, contact tracing, laboratory investigation, isolation, clinical management and implementation of infection and prevention and control measures. Genomic sequencing of viral deoxyribonucleic acid (DNA) of the monkeypox virus found in the current outbreak is ongoing, where available; preliminary data from polymerase chain reaction (PCR) assays indicate that the monkeypox virus genes detected belong to the West African clade.

WHO has strongly encouraged Member States to consider the context of the current multi-country outbreak of monkeypox and convene their national immunization technical advisory groups (NITAGs) to review the evidence and develop policy recommendations for the use of vaccines as relevant to the national context. All decisions around immunization with smallpox or monkeypox vaccines (pre-emptive or post-exposure) should be by shared clinical decision-making, based on a joint assessment of risks and benefits, between a health care provider and prospective vaccinee, on a case-by-case basis. Member States using vaccines against monkeypox are encouraged to do so within a framework of collaborative clinical studies using standardized design methods and data collection tools for clinical and outcome data to rapidly increase evidence generation, especially on vaccine effectiveness and safety.

Tecorivimat is an antiviral drug with recent regulatory approval from the European Medicines Agency for orthopovirus-associated infections, including monkeypox, based on animal models and data for safety, pharmacokinetics and pharmacodynamics in humans. Therefore, it is expected that reliable and interpretable results on its safety and efficacy will soon become available.

Outcomes of the Emergency Committee

The International Health Regulations (2005) Emergency Committee met on 23 June 2022 regarding the multi-country monkeypox outbreak to advise the WHO Director-General on whether it constituted a Public Health Emergency of International Concern (PHEIC). The committee advised the WHO Director-General that the outbreak should not constitute a PHEIC at this stage, however, the Committee acknowledged the emergency nature of the event and that controlling the further spread of this outbreak requires intense response efforts. They advised that the event should be closely monitored and reviewed after a few weeks, when additional information about the current unknowns (e.g., incubation period, the role of sexual transmission, etc.) become available, to determine if significant changes have occurred that may warrant a reconsideration of their advice.

The Committee advised the WHO Director-General that Member States should collaborate with each other and with WHO in providing the required assistance through bilateral, regional or multilateral channels, and should follow the guidance provided by WHO (see the list of documents at the bottom of the page).

The Director-General accepted the advice of the Committee, adding in a statement that the situation requires collective attention and coordinated action now to stop the further spread, using public health measures including surveillance, contact-tracing, isolation and care of patients, and ensuring health tools like vaccines and treatments are available to at-risk populations and shared fairly.

The overall risk is assessed as moderate at global level considering this is the first time that cases and clusters are reported concurrently in five WHO Regions. At the regional level, the risk is considered to be high in the European Region due to its report of a geographically widespread outbreak involving several newly-affected countries, as well as a somewhat atypical clinical presentation of cases. In other WHO Regions, the risk is considered moderate with consideration for epidemiological patterns, possible risk of importation of cases and capacities to detect cases and respond to the outbreak.  In newly-affected countries, this is the first time that cases have mainly, but not exclusively, been confirmed among men who have had recent sexual contact with a new or multiple male* partners.

The unexpected appearance of monkeypox and the wide geographic spread of cases indicate that the monkeypox virus might have been circulating below levels detectable by the surveillance systems and sustained human-to-human transmission might have been undetected for a period of time. Routes of monkeypox virus transmission include human-to-human via direct contact with infectious skin or mucocutaneous lesions, respiratory droplets (and possibly short-range aerosols) or indirect contact from contaminated objects or materials, also described as fomite transmission. Vertical transmission (mother-to-child) has also been documented.  While it is known that close physical contact can lead to transmission, it is unclear whether sexual transmission via semen/vaginal fluids occurs, research is currently underway to understand this. In addition, the likelihood of sustained community transmission cannot be ruled out and the extent to which pre-symptomatic or asymptomatic infection may occur as the infectious period is unknown, as well as the further spread of monkeypox virus among persons with multiple sexual partners in interconnected networks and the likely role of mass gatherings.

The clinical presentation of monkeypox cases associated with this outbreak has been atypical as compared to previously documented reports: many cases in newly-affected areas are not presenting with the classically described clinical picture for monkeypox (fever, swollen lymph nodes, followed by centrifugal rash).

The actual number of cases is likely to be underestimated, in part due to the lack of early clinical recognition of an infection previously known in only a handful of countries, and limited enhanced surveillance mechanisms in many countries for a disease previously ‘unknown’ to most health systems. Health care-associated infections cannot be ruled out (although unproven to date in the current outbreak). There is a potential for increased health impact with wider dissemination in vulnerable groups as the mortality was previously reported as higher among children and young adults, and immunocompromised individuals, including people living with uncontrolled HIV infection, are especially at risk of severe disease.

The risk is also represented by the difficulties involved in widespread lack of availability of laboratory diagnostics, antivirals and vaccines and as well as in ensuring adequate biosafety and biosecurity in diagnostic, clinical and referral laboratories everywhere that cases have occurred.

A large part of the population is vulnerable to monkeypox virus, as smallpox vaccination, which is expected to provide some protection against monkeypox has been discontinued since the 1980s. Only a relatively small number of military, frontline health professionals and laboratory workers have been vaccinated against smallpox in recent years. A third-generation vaccine MVA received authorization of use by the European Medicines Agency for smallpox. The authorization of use provided by Health Canada and the United States Food and Drug Administration (FDA) includes an indication for the prevention of monkeypox. An antiviral agent, tecovirimat, has been approved by the European Medicines Agency, Health Canada, and the United States FDA for the treatment of smallpox. It is also approved for use in the European Union for the treatment of monkeypox.