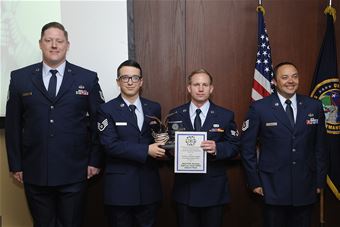 While the 233d Space Communication Squadron may reside in a quiet farming community in Greeley, Colorado, its members are solving problems with huge national impact.

The annual Department of Defense (DoD) Nuclear Command, Control and Communications Team Award was recently presented to a 4-man team from the 140th Wing, Colorado Air National Guard, who developed and fielded a solution to replace a failing mission-critical system, saving the Air Force over ten million dollars in potential redesign and replacement costs.

These Airmen recognized a lack of serviceable MILSTAR Antenna Reference Units in the United States Air Force Supply System, which are required to successfully operate the nation’s only survivable and endurable missile warning and attack assessment capability. This task is conducted by the 233d Space Warning Group’s Mobile Ground System, maintained and operated out of the Greeley Air National Guard Station.

"After ordering multiple ARU’s in 2013 and 2014, it became very apparent that this part was in very short supply," explained Senior Airman Jonathan Smail, satellite communications technician with the 233d Space Communications Squadron. "As we examined the number of remaining ARU’s in the supply system and the average fail rate, we knew that something would need to be done."

Without a serviceable ARU, the MILSTAR Communication Vehicle lacks the proper navigational information to be able to quickly and reliably acquire communication withthe MILSTAR satellite. No replacement for the ARU had proven effective, which left the Mobile Ground System lacking a mission critical capability.

"As our trucks continue to age beyond their expected lifespan, we are finding it more and more challenging to preserve the functionality of each line replaceable unit that the truck houses," explained Tech. Sgt. Jeremy Gourd, radio frequency transmission systems craftsman, 233 SCS. "The ARU issue emerged as one of the first we were faced with a few years back when the supply inventories discovered we had minimal replacements."

Instead of waiting for the Air Force to remedy the situation, members of the 233 SCS set their minds to the task of creating a work-around solution in order to maintain mission readiness.

"I am most proud of the fact that when others throw their hands in the air and walk away because the challenge seems insurmountable, our Airmen increase their resilience, dig in their heels, and fight for solutions," said Col. Thomas McKenna, commander of the 233d Space Group. "They will not quit until they have exhausted every available resource and option at their disposal.  ‘Failure’ is not in their vocabulary."

And their hard work and determination paid off because the team managed to come up with a manual log-on procedure to be able to reliably acquire communication with the MILSTAR satellite using only a few hundred dollars’ worth of commercial, off-the-shelf products.

"TSgt Grady Murphy and SSgt Guy Winn were the true engineers behind the manual log-on procedures," said Smail. "It was amazing to watch them analyze what information the ARU provided to the terminal and work to create manual steps to recreate what happened electronically.  That fact that they could take simple tools from a hardware store and reproduce what a half million dollar part did is truly phenomenal."

In a nutshell, the team developed, designed, tested and implemented a manual log-on process using five hundred dollars of COTS equipment that saved an estimated ten million dollars in ARU re-design and replacement costs and most importantly, saved the critical weapons system from an indefinite amount of down time.

"I am incredibly humbled when events like this occur and I see the brilliance of our Colorado Air National Guard technicians!" McKenna said. "Their ability to devise unique solutions to new and evolving problems makes me sleep well at night knowing our mission will be successful despite the challenges they will inevitably face employing aging equipment in austere environments."

But of courseevery good idea needs to prove its worth, and that’s a large part of how Sergeant Gourd contributed to the project. "I think it was a ‘right time, right place’ situation for me; I just happened to walk in on Sergeant Murphy and Sergeant Winn plugging away on the mathematical portion of this solution and really wanted to help," said Gourd, who said he was motivated by "the successful completion of this amazing vision."

Gourd, who is a licensed electrician in Colorado, developed the tool inventory necessary to achieve the required parameters for satellite lock, and was also a key player in the field testing phase of their solution.

"The Force Package (MILSTAR Flight) that I led in the annual field training period last year was the first to bring up the truck in the field using our method and it worked perfectly," said Gourd. "I can tell you this; it was a fine day for the ARU team and the MILSTAR team!"

Additionally, their solution was field-tested and officially approved during US Strategic Command’s Global Thunder exercise in 2014, ensuring top Air Force leadership that endurable, mission-critical missile warning data necessary for Presidential decision making will be provided until a replacement ARU system is eventually fielded.

As a result of this demonstration, Strategic Command’s Director of C4 Systems, Ms. Kerry Kelley, SES, was so impressed that she nominated the team for the NC3 TEAM Award, which is a DoD-level award that recognizes outstanding contributions to the Nuclear Command, Control, and Communications (NC3) community, explained McKenna.

It didn’t take long for their hard work to be recognized. On February 24, 2015, the team was chosen above nine other nominees to receive the NC3 TEAM Award at the ITW/AA Stakeholders Meeting in Colorado Springs, Colorado.

"It’s incredibly gratifying when our customers take the time to see the ‘minor miracles’ our Airmen perform in the trenches on a daily basis and then highlight them on the biggest stages," McKenna said.

Tech. Sgt. Grady Murphy, a radio frequency transmission technician who has been in the career field for over eleven years, says the project took about nine months to develop and field test, and when asked what motivated him to undertake this huge challenge, he humbly stated, "I was just doing my duty to maintain and operate the MILSTAR terminal."

All members of the team expressed feelings of honor and good fortune to have been a part of the award-winning team, and give thanks to their leadership in the 233d Space Group for encouraging them along the way.

"The support that we received from our squadron- and group-level leadership was unparalleled," said Smail. "From the very beginning, we had their full support in trying to remedy this problem.  They would make time in their busy schedules to stop and see our progress."

The effort to maintain and sustain the aging equipment is clearly a top priority for the 233 SG.

"We continue to face challenges on a daily basis with the sustainment of our aging weapon system," explained McKenna. "Some of our equipment is entering its fourth decade of service to our nation. Unfortunately, budget cuts, sequestration, and programming complications have delayed our critical modernization — the SBIRS Survivable Endurable Evolution — years past the design life of our current system."

Thankfully, the determination and ingenuity of these Airmen and others like them have enabled the 233d Space Group to keep their systems running beyond their life expectancies.

McKenna summed it up simply. "Since we provide critical missile warning and nuclear detonation detection to the Nuclear Command and Control enterprise, the actions of our Airmen demonstrate why the Air National Guard is so essential to the security of our nation," he said.