Terrorists’ Use of Drones Promises to Extend Beyond Caliphate Battles

Unmanned and remote-controlled aircrafts, i.e. drones, continue to change the character of contemporary warfare.[i] It was satellites and drones, alongside a good deal of human intelligence, that located Osama bin Laden in Afghanistan in 2000[ii] and later, right up to the minute of the raid, helped to zero in on his compound in Abbottabad, Pakistan.[iii]

Drones in the hands of governments have raised considerable controversy as the unmanned aircrafts were excessively relied upon during the Obama administration to carry out targeted assassinations against terrorist leaders in Somalia, Yemen and Northern Pakistan, to name a few. Their increased usage, by both the U.S. military and CIA, caused complaints that drone kills carried out by the CIA were illegal, that drone kills of terrorists in their homes also killed innocent family members visiting or residing with them, and that killing versus arresting terrorists sacrificed valuable intelligence that could be otherwise gathered in a capture operation.

Controversy also arose over the usage of drones by governments to target their own citizens serving in terrorist organizations. In 2015, Reyaad Khan, a UK citizen who had joined ISIS, was killed in a drone strike. British Prime Minister Theresa May defended drone usage in targeted killings on the grounds that they are “necessary and proportionate” to ISIS’ use of violence.[iv] Likewise, Americans Adam Gadahn and Ahmed Farouq, two senior al-Qaeda operatives, were also killed by drones in 2015, although the extent to which they were deliberately targeted remains debatable.[v] Similarly, U.S. drone strikes led to the killing of Anwar al-Awlaki, an American-born radical cleric and imam, in Yemen in 2011.[vi] More disturbingly, al-Awlaki’s American son, 16-year-old Abdulrahman al-Awlaki, was also killed in a drone strike two weeks later, raising serious ethical concerns about the use of drone kills against U.S. citizens, particularly minors.

The use of drones by non-state actors has been documented as well. Both Hamas and Hezbollah used Iranian-manufactured drones to conduct surveillance over Israeli-controlled territories.[vii] In addition, drones had become central to ISIS’ military operations, in varying capacities, since at least 2014.[viii] The group had managed to take advantage of drone usage in recent years, namely to utilize them from gathering intelligence through aerial photography, to making aerial video recordings of their attacks for use in their propaganda films, to geographic mapping, to border control surveillance and delivery of explosive, chemical and biological weapons.

Research shows that, generally speaking, ISIS had been able to develop its drone programs without any support from state actors, although many of its drones were, according to our interviews and other sources, transferred into Syria via Turkey by non-state terrorist actors. ISIS was also able to magnify their usage and impact by studying guides and following instructions on drone modification and weaponization.[ix] In addressing the use of drones by the Islamic State, some researchers have noted: “The Islamic State is a group known for doing things a bit differently, for its capacity for innovation, and for its many ‘firsts.’ The first occurred in October 2016 when the group used a bomb-laden drone to kill, after the explosive hidden within the drone killed two Kurdish Peshmerga soldiers who were investigating the device. Another ‘first’ happened in January 2017 when the Islamic State released a propaganda video that showed nearly a dozen examples of the group releasing munitions on its enemies from the air with a fair degree of accuracy via quad copter drones it had modified. And it wasn’t long before the group’s bomb-drop capable drones would go on to kill, too.[x]”

In January 2019 a YPG media representative told ICSVE researchers that she and her media group had been forced to flee the ISIS front (near Hajin, Syria, at the time) as an ISIS drone locked in on and bombed them from the air, pursuing them as they took shelter in a nearby building.

In February 2019, ICSVE researchers had the opportunity to view firsthand some of the captured arsenal of ISIS utilized and manufactured drones, both weaponized and non-weaponized, used against Iraqi and enemy forces. In addition to bomb components, snipers, laptops, and pistols used in public executions, among others, which were displayed as war trophies in the war against ISIS in a museum in Baghdad, Iraqi military and security forces also paraded dozens of drones seized by the Islamic State following a number of decisive and breakthrough battles against the terrorist group (See pics 1 and 2). 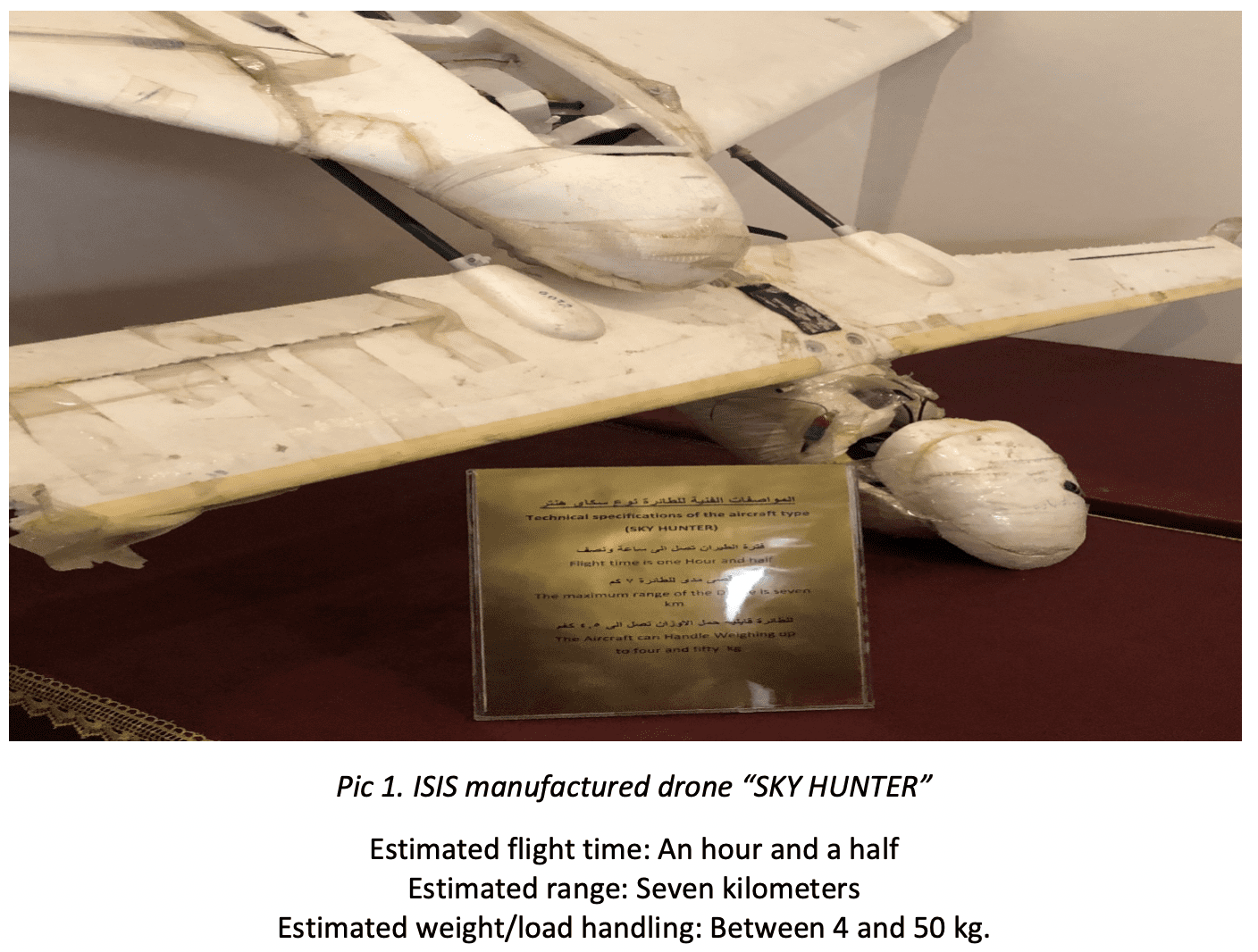 While ISIS has lost most of its territories it once held in Iraq and Syria, the use of drones and emerging technologies by terrorists and their supporters remains worrisome. In September 2018, Danish authorities arrested two individuals suspected of buying drones and attempting to ship them via Turkey, to the Islamic State in Iraq and Syria. They were believed to be a part of a much larger network. [xi]

The dangers emanating from unmanned aircraft has been also documented in a recent attempt to assassinate Venezuelan President Nicholas Maduro. Moreover, some researchers have cited “off-the-shelf technology and tactical flexibility” associated with drones, coupled with state sponsorship of terrorist groups, as potential factors increasing the likelihood of terrorist drone attacks in the future.[xii]

FBI Director Christopher Wray has also warned of the potential for drone attacks against U.S. citizens, given their availability and ease of use. [xiii] Given that attacks by terrorists and violent extremist groups involving drones are likely to become more common in the future, we must not underestimate their efficacy in the hands of terrorists in both perpetrating direct attacks and serving as effective surveillance tools to gather intelligence that could facilitate the planning and commission of attacks by other means.

[i] Bowden, M. (2013).” How the predator drone changed the character of war,” Smithsonian, available at https://www.smithsonianmag.com/history/how-the-predator-drone-changed-the-character-of-war-3794671/

[iv] MacAskill, E. (2017). “ May defends use of drones to kill British terrorists overseas,” The Guardian, available at https://www.theguardian.com/world/2017/dec/20/theresa-may-drone-strikes-british-terrorists-reyaad-khan

[v] Mazzetti, M. (2015). “ Killing of Americans deepens debate over use of drone strikes,” The New York Times, available at https://www.nytimes.com/2015/04/24/world/asia/killing-of-americans-deepens-debate-over-proper-use-of-drone-strikes.html

[vii] As cited in Almohammad, A., & Speckhard, A. (2017). “ ISIS drones: Evolution, leadership, bases, operations, and logistics, “ ICSVE, available at https://www.icsve.org/isis-drones-evolution-leadership-bases-operations-and-logistics/