AQAP Cleric: Kill All Who Insult Muhammad, Calls for Waves of Attacks Against West 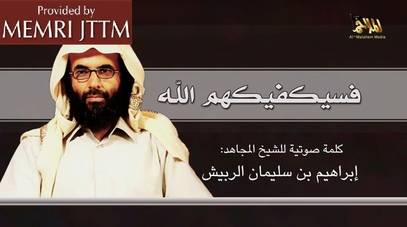 In a 8:29-minute audio message by one of Al Qaeda in the Arabian Peninsula’s (AQAP) top clerics, Ibrahim Al Rubaish, released Friday via Twitter (@AMOJAH4), Al Rubaish said, “The unbelievers should be struck in their own countries, [and] anyone who insulted our prophet [should] be chastised, as well as anyone who expressed solidarity with he who insulted [the prophet], and [the jihad] work must continue, and the raid must be followed by another raid."

“Al Rubaish speaks about the wave of solidarity in the West, particularly in France, that followed the January 7 attack on the French satiric weekly Charlie Hebdo. Denouncing these expressions of support, Al Rubaish says anyone who participated in it, including Muslims, should be targeted and pay a hefty price,” said the Middle East Media Research Institute (MEMRI) which monitors jihadist social media sites.

MEMRI said, “Al Rubaish also accuses France of leading the war on Islam and Muslims, and says that France, and all unbelievers, who participate in the aggression against Islam and Muslims and allow their citizens to freely insult Islam must also pay a price, in their security and in their economy. He stresses that the Muslims should declare war on anyone who insults the Prophet Muhammad, and that by doing so they will pressure the unbelievers’ governments to pass legislation criminalizing blasphemy against Islam. He further urges Muslims to kill anyone who insults Muhammad, saying that no consultation is required in such a matter.”

Doing so, Al Rubaish explained, will pressure Western governments to reprimand anyone who insults Islam or its prophet. He said attacks on “unbelievers” must continue "until every journalist realizes that if he offended Islam, no newspaper will accept him [to work there], nor any hotel will give him shelter, and [that he] will not find [any] spot where he [can] sleep soundly."

MEMRI Executive Director Steven Stalinsky told Homeland Security Today that, “The timing [of the release of Al Rubaish’s message] is no accident … They don’t want ISIS to get all the headlines.”

In recent months, as Homeland Security Today has reported, both Islamist jihadist groups AQAP and the Islamic State have stepped up their calls for Muslims to attack the West where ever they are, but especially in United States and Western Europe.

“Al Rubaish remarks on the unbelievers’ deep hatred of Muslims, which he says was noted in the Koran and Sunnah,” MEMRI said. Al Rubaish said, “They aim to sway Muslims away from their religion, and adds that their insulting Muhammad is just another form of their animosity towards Islam. These actions on their part are deliberate because they know how deeply Muslims revere Muhammad. The unbelievers’ insults against Muhammad is an addition to a series of other crimes committed by them against the Muslims, such as their aggression against Muslim countries and their advocating corruption there. Thus, Al Rubaish says, the Muslims are entitled to respond to these crimes.”

“Moving on to the response of Muslims to anyone who insults Muhammad, Al Rubaish first stresses Muslims’ obligation to defend Muhammad’s name, and then stated Muslims who insult him commit an act of kufr [heresy] and are therefore excommunicated from the abode of Islam,” MEMRI said.

Al Rubaish alsoexpressed amazement at how many unbelievers showed their support for those who insulted Prophet Muhammad following the AQAP claimed attack on the Paris offices of Charlie Hebdo and the wave of condemnation that followed.

He rebuked Muslims who joined the unbelievers in expressions of solidarity with the killings of the editor and several cartoonists at Charlie Hebdo – which was part of a larger attack in which hostages were taken and some killed at a Jewish café — and said any Muslim who expressed solidarity with anyone insulting the prophet is a heretic, which is punishable by death under jihadists interpretation of Islamic religious law.

He said, “The unbelievers who joined in solidarity with those who insulted Muhammad … must pay a hefty price.”

Al Rubaish also said France played the biggest role in insulting Muhammad, and has assumed the leading role among the unbelievers in fighting Islam and Muslims.

"The unbelievers must pay the price for their aggression on our lands and for their insult to our prophet — a price that has a cost for their security and their economy," Al Rubaish said, calling for attacks in the West, specifically in response to Western governments’ allowance of insults of Muhammad by free speech, which Islamist religious law prohibits.

"We must push them into rescinding freedom of expression – if it means insulting Muslims … and we won’t be able [to achieve] that unless we declare a war against every [person who] insults [Muhammad]," Al Rubaish said.

MEMRI said Al Rubaish believes unbelieving countries will realize the price they are paying for their form of freedom of expression and will pass laws banning anyone from insulting Muslims.

Or else. Under Islamist jihadist religious ideology, there must be no freedom of expression, and, just like Muslisms, non-believers are just as punishable for their crime of defaming the prophet.

Al Rubaish concluded by calling on Muslims to kill anyone who insults Muhammad without religious consultation.

"Oh Muslims who love the prophet … proceed with the blessing of Allah, and do not consult anyone in killing those who insulted the prophet … since this is not among the matters in which consultation [is necessary]."