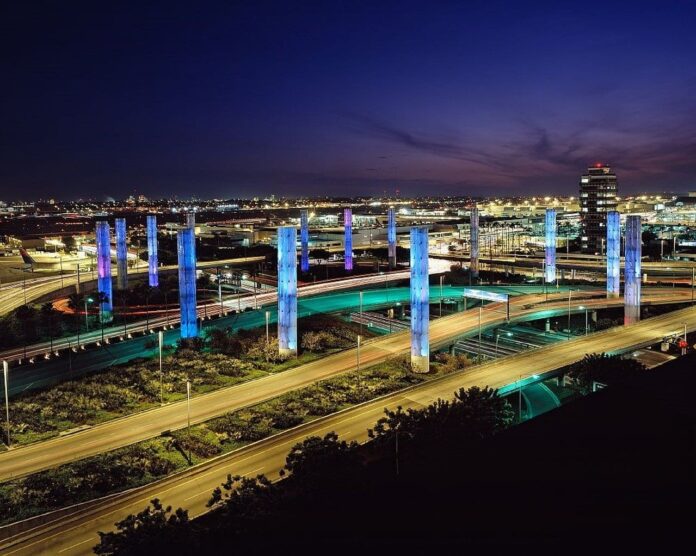 Los Angeles World Airports (LAWA) recently took the next step in its $14.5-billion modernization of Los Angeles International Airport (LAX) ahead of the 2028 Olympics as the Los Angeles Board of Airport Commissioners (BOAC) unanimously approved the appropriation of more than $1 billion to fund the final and largest phase of construction for the modernization of Terminals 4 and 5.

The Board’s July 8 approval paves the way for LAWA to acquire the modernized facilities from American Airlines, which is administering the ongoing work in both terminals. In total, the projects will cost about $1.62 billion. For this project, American Airlines has committed to achieve a goal of 20 percent of the work going to local and diverse business enterprises.

In addition to providing a pedestrian bridge connecting Terminals 4 and 5 to the forthcoming Automated People Mover train, the terminal vertical core also will include new passenger check-in and baggage claim facilities, a consolidated security screening checkpoint, a new headhouse area for passenger processing and a new post-security connection between Terminals 4 and 5. The vertical core also provides office and support spaces for airlines, the Transportation Security Administration (TSA) and other law enforcement agencies. The façade of the vertical core will match design elements of other cores that are currently under construction throughout the Central Terminal Area.

A new south concourse will be constructed inside Terminal 4, featuring additional space for hold rooms, concessions, restrooms and a bus gate that will serve both domestic and international traffic. Two existing aircraft gates will also be rebuilt to support U.S. Customs and Border Protection Federal Inspection Station capability. Improvements will be made to the north concourse that will increase the efficiency of passenger movements.

Additional work includes improvements to Terminal 4 power systems, including transformers and backup power, replacement of the terminal’s aircraft apron and a reconfiguration of its hydrant fueling system and underground utilities.

These improvements are projected to be completed ahead of the 2028 Olympic Games, which will be hosted in Los Angeles. The work now goes to the Los Angeles City Council for approval.