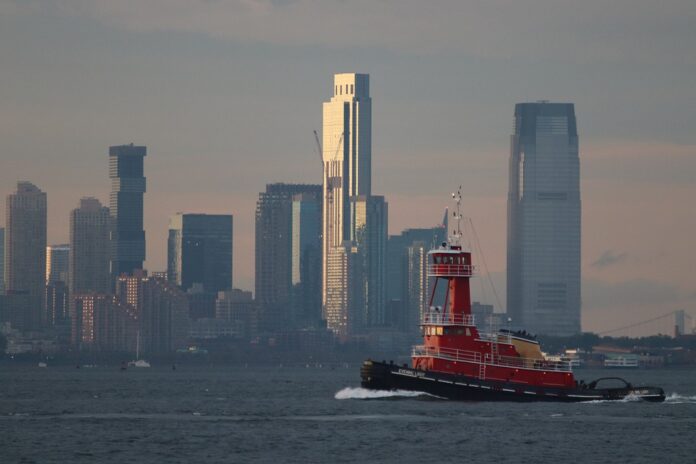 The Port Authority of New York and New Jersey has announced that Sam Ruda, who has presided over record-setting growth at the busiest seaport on the East Coast, is stepping down as Director of the Port Department. Acclaimed maritime industry veteran Beth Rooney, who has more than three decades of experience and has been an integral part of the Port Department since 1993, has been appointed as its new Director.  Having served as Deputy Director for the past three years, she will assume the Director role effective May 2.

Together, Ruda and Rooney have led the East Coast’s busiest and largest seaport, and third in the nation behind the Port of Los Angeles and Port of Long Beach. Under their leadership, the Port has achieved record-breaking volumes while navigating significant challenges posed by the Covid-19 pandemic and global supply chain disruptions, maintaining fluid operations at a time other large ports have seen significant backlogs. Ruda and Rooney have also overseen the development and implementation of the Port Master Plan, a visionary strategy to guide the port’s growth and manage an expected increase in cargo volumes over the next 30 years.

“Sam Ruda has led the Port Department during one of the most critical periods in its history,” said Port Authority Chairman Kevin O’Toole. “He has provided superior leadership during his years as director and has helped build an extraordinary team, starting with Beth Rooney, whose vast experience and expertise will continue to be a tremendous asset for one of the country’s most significant gateways.”

“We’ve been extremely fortunate to have an executive of Sam’s caliber to lead the nation’s premier East Coast seaport during a time of unprecedented growth and operational challenges,” said Port Authority Executive Director Rick Cotton. “And we are even more fortunate to appoint a widely respected and accomplished industry veteran to lead the Port into the future. Beth has tackled a wide array of critical initiatives during her remarkable career, and she will provide the Port with both continuity and vision – ensuring that the quality of our operations remains second to none in the industry.”

“It has been an honor and privilege to be part of the senior leadership team at the Port Authority and to preside over this nationally important seaport complex,” said Ruda. “Working with an incredible Port Department team, as well as our terminal operators and industry stakeholders, I’m proud of our accomplishments and congratulate Beth Rooney on her well-deserved appointment as director.”

“Throughout my tenure at the Port Authority, I’ve been privileged to be a part of the incredible growth and evolution of the Port of New York and New Jersey,” Rooney said. “The future is bright, and it’s my honor to lead the Port, our customers and partners through the next generation of transformational changes and to prepare for the long-term success of the Port, the largest economic driver in the region.”

Ruda is departing the agency to return to his home on the West Coast. He joined the Port Authority in 2015 after a 29-year career in transportation, including 12 years as a key member of the Port of Portland management team in Oregon. He was appointed to head the Port of New York and New Jersey in April 2019, five months after being named Interim Director.

Rooney joined the Port Authority in 1993 and has held a series of progressively higher-level management positions in the Port Department since then. She was appointed Deputy Port Director in April 2019 after serving as the Port’s Assistant Director overseeing policy, planning, legislative and regulatory affairs, as well as environmental sustainability, performance, and efficiency imperatives.

She was the architect of the Council on Port Performance, a unique forum of supply chain stakeholders credited with unprecedented collaboration that has helped the Port of New York and New Jersey continue to perform well throughout the pandemic. She is a graduate of the State University of New York Maritime College with a master’s degree in International Transportation and a bachelor’s degree in Marine Transportation. Rooney also is an Accredited Marine Port Executive from the International Association of Maritime and Port Executives.

The leadership changes come at a time of extraordinary growth at the Port, particularly during the past two years as the pandemic drove a sharp increase in the amount of cargo moving through port facilities, with record-setting numbers posted virtually every month since the early days of Covid-19.

The seaport handled 759,248 TEUs (20-foot equivalent units) in February 2022, setting a new record for cargo movement in any month of February in its history. Volume during the month was nearly 30-percent higher than in February 2019, and the agency experienced new record volumes month over month beginning in early 2020.

In 2021 overall, the Port moved a total of nearly 9 million TEUs — an increase of 20.2 percent from the annual 2019 pre-pandemic total and the highest single-year total in its history, reflecting the ability to handle unprecedented cargo amounts in strong collaboration with its marine facility and intermodal network partners.