Homeland Security Department at 15 on ‘Strong and Steady Course’ 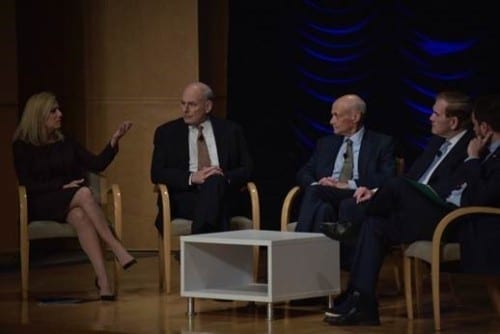 “Today, DHS is on a strong and steady course,” Secretary Nielsen said during her keynote address. “Our workforce is empowered, committed, and proud to serve. And we are working hard to fulfill President Trump’s commitment to make America safe and secure.”

Pence told the attendees the American people are grateful to DHS employees. “You’ve considered the people of this country more important than yourself,” he said. “You’ve dedicated your lives to protecting the homeland and for 15 years you’ve done just that, with distinction and with integrity.”

A number of DHS employees who have been at the department since 2011 also spoke.

“In the heavy days after 9/11, there were so many ideas about how to better protect, secure, and prepare this nation,” said Katie Fox of the Federal Emergency Management Agency. “With that came a sense of urgency and an incredible sense of duty to do the right thing for those who had suffered so greatly.”

“When we were transferred to the newly created Department of Homeland Security, we brought our unique skillset and integrated mission of investigations and protective operations to ensure that our children would never have to witness another day like Sept. 11, 2001,” said Ronald Rowe of the U.S. Secret Service.

“We as a department are united as one to protect our great nation, defend it from harm, and always remain vigilant,” said Patrick Orender of U.S. Customs and Border Protection.

Staff at the Boston Customs and Border Protection field office celebrated formation of CBP, which initially combined the inspection and enforcement elements of the U.S. Customs Service and Immigration and Naturalization Service, including the U.S. Border Patrol, along with the Agriculture Department Animal and Plant Health Inspection Service. In 2004, DHS transferred Air and Marine Operations to CBP.

“The events of September 11th and the incorporation of the U.S. Border Patrol under DHS and CBP 15 years ago highlights the important work our agents carry out each and every day to secure the nation from those who want to do us and our communities harm,” said Acting Chief Patrol Agent Robert Garcia of the Swanton Sector.