Jonny Castro is a Police Officer, a Forensic Composite Artist, and a U.S Army Combat Veteran serving the Operation Iraqi Freedom (2004-2005). He is also a portrait painter of heroes killed in the line of duty.

“Police Officers risk their lives every single day to protect the citizens of this country. They go out and do a thankless job because, believe it or not, they want to make a difference,” says Jonny. “They laugh. They cry. They have families. They have hobbies. They are human beings just like everyone else.”

And this is precisely Jonny’s motivation for painting portraits of these fallen heroes. He provides the paintings, completely free of charge, for family members and the men and women who worked beside these heroes.

Jonny wants to try to share who these officers were in life before they were taken from us. Since March of 2016, he has completed an amazing total of 400 portraits of heroes killed in the line of duty and victims of crime. How did he get started and who was his first subject?

“I’ve been drawing my whole life. I went to college for Graphic Design but I ended up dropping out after 9/11 happened and joined the Army. I did a tour in Iraq as a Military Police Officer, came home and pretty much immediately became a Police Officer.”

Jonny hadn’t worked much with art for the nine years that he worked patrol until he saw the position of Forensic Artist had opened up. “I started getting back into drawing every day, built up a portfolio, submitted my transfer and I got the job. I’ve been doing Forensic Art now for over three years.”

He provides the paintings, completely free of charge, for family members and the men and women who worked beside these heroes.

He started painting portraits of fallen officers back in March 2016. The first one he ever painted was Philadelphia Police Sergeant Robert Wilson.

Wilson was an officer in Jonny’s department that was gunned down during a robbery of a Game Stop. He was posthumously promoted to the rank of Sergeant for his bravery and heroism that day. He was also awarded the two highest awards an officer can receive for his actions: The Medal of Honor and the Medal of Valor. 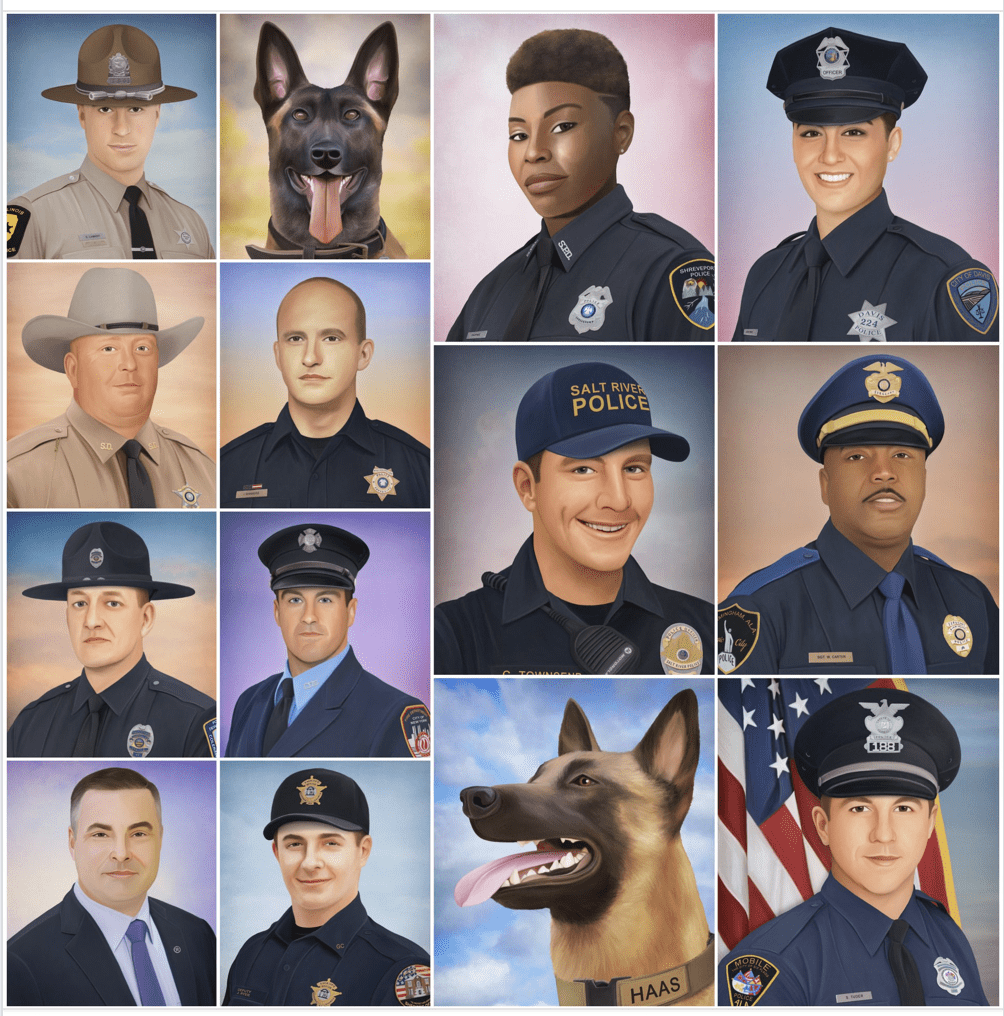 Jonny explains that since Wilson never had any photos of himself as a Sergeant, he painted him wearing his dress uniform and medals. “It was received very well and I got a ton of positive feedback, so I decided to just keep it going and focus all my artwork on capturing fallen officers.”

The response to these paintings is always positive, especially in Philadelphia, Castro’s hometown. He has boxes filled with hundreds of thank you letters from the fallen officers’ families and departments. Often, some of the officers don’t have very many photos of themselves in uniform. Or the photos that they do have are outdated. Jonny’s artistic skill gives their families something up to date and bright that they can frame and hang in their homes. 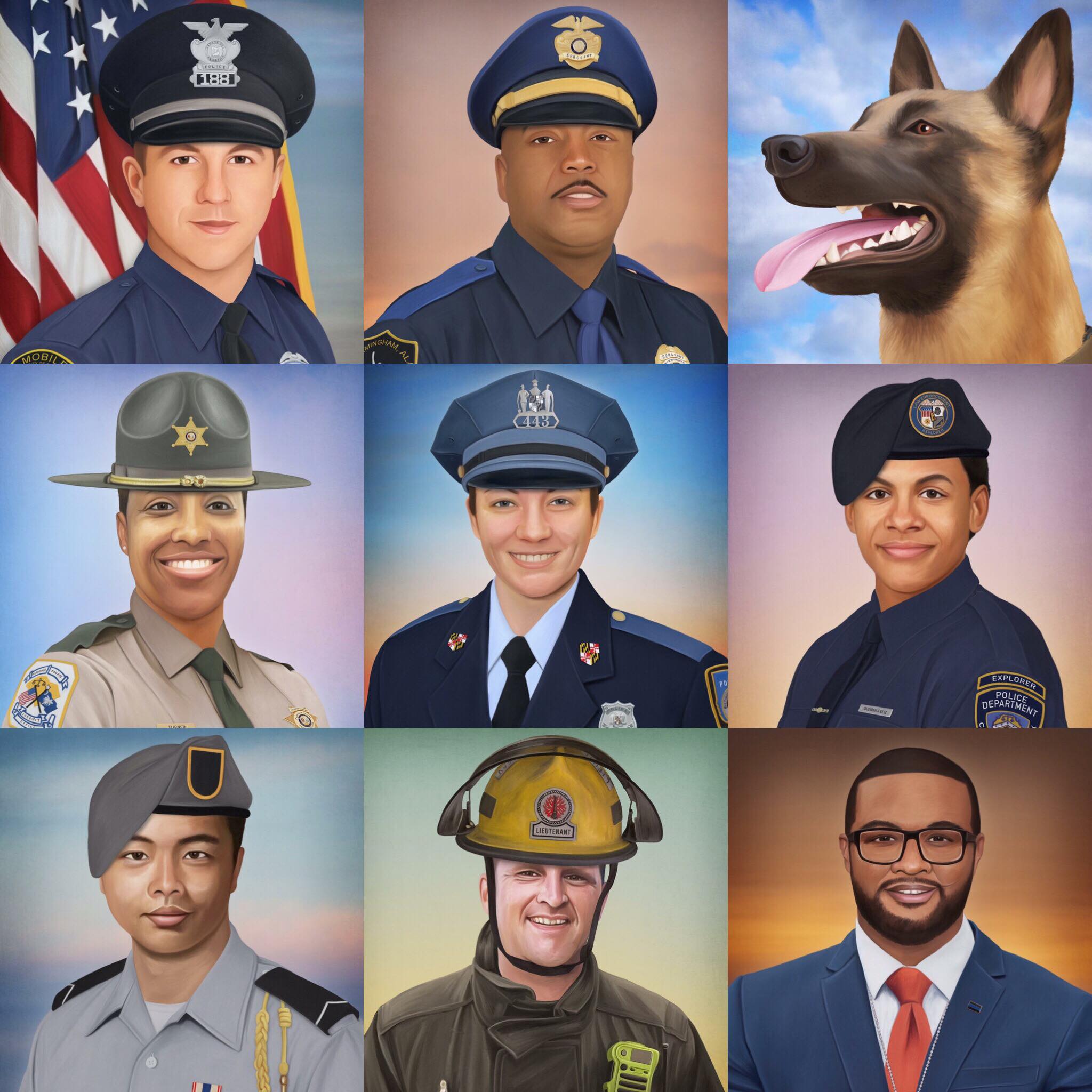 Some of the portraits of victims of crime were tough to do. “The young girl killed in NYC in Times Square, the young girl killed in the bombing at the Ariana Grande concert in Manchester or the man shot and killed on Facebook live in Cleveland. Those were tough, but hearing back from their families and them telling how much they appreciated the portrait makes what I do so worthwhile.”

The paintings are entirely self-funded and Jonny doesn’t charge a penny, not even shipping costs. He’s adamant that he will never charge anyone for an officer killed in the line of duty. He cares deeply because he’s been in these situations himself. “I’ve had friends shot in the line of duty. I had friends killed in Iraq. So it’s important for me to tell their stories through artwork, and keep their memories alive.”

“The message that anyone should take away from this is that Police Officers are human beings too. They have families and they’re real people. Every time that a portrait goes up, that is someone’s father, mother, husband or wife that won’t be coming home at the end of the day.”

See more of his work and follow him at https://www.facebook.com/jonnycastroart/