Merit-Based Immigration: What the U.S. Can Learn from Canada and Australia 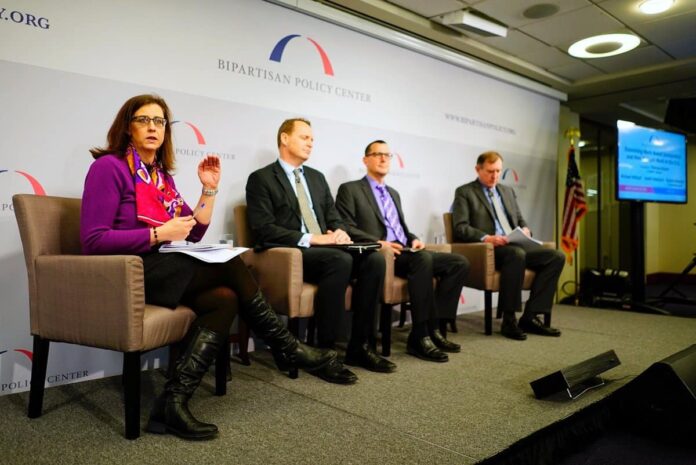 Daniel Griswold, senior research fellow at The Mercatus Center and co-director of the Program on the American Economy and Globalization, told the audience at the discussion on merit-based immigration that the U.S. should welcome more legal immigrants, not fewer, and argued that immigrants have “an extra dose of ambition and innovation.”

He also slammed current immigration quotas, saying that the current cap of 7 percent of immigrants from any one country is a form of “ethnic engineering” and “absurd.”

The discussion compared the immigration system in the U.S. with merit-based immigration policies in Australia and Canada, both widely viewed as successful. Discussing their country’s respective policies was Michael Willard, assistant secretary, Department of Home Affairs, Embassy of Australia, and Andre Valotaire, minister counsellor, Immigration, Embassy of Canada.

Valotaire described how Canada’s system is a balance between merit-based immigration and family reunification and humanitarian programs. He said that Canada is looking at increasing its immigration targets by a further 1 percent within the next three years. He described how, as well as skills-based points, points are also awarded for having siblings in Canada, which leads to a higher rate of integration. Valotaire stated that only about 20 percent of immigrants into Canada have been selected purely on points; the remainder have strong family links within the country.

The Canadian minister also explained that outside of Quebec, points are awarded for being French-speaking, a policy which he says is expected to continue.

Willard described the Australian immigration system as “non-discriminatory,” except in terms of skills. “It is all about what migrants can bring to Australia,” he said, describing how migrants are filling a skills gap rather than displacing the jobs of Australian residents, a sentiment that Valotaire echoed about Canada. Willard did admit, though, that despite 28 percent of the country’s population being overseas-born, immigration has always been a contentious topic in Australia. He told the audience that Australia has a firm approach to maritime arrivals, which is watched with interest by the rest of the world, and that its managed system gains general support among the population, although he did state that the expectation that temporary migrants will achieve permanent residency status is a source of tension.

Griswold applauded Australia’s non-discriminatory system and the support for family-based immigration from both Canada and Australia. He told the audience that “the greater American immigration machine has always relied on families,” with relatives required to sign an affidavit to guarantee financial support. He also supported a rise in legal immigration from the current rate of 3.3 people per 1,000 to 4.3 per 1,000 in the U.S.

Griswold slammed President Trump’s recent comments on immigration, describing them as “outrageous and inappropriate.” He also criticized the diversity visa lottery program, which favors applications from countries with lower levels of immigration to the U.S., saying that it accounts for 50,000 applications that ought to be merit-based instead.

The three lessons that the U.S. could learn from Australia and Canada are to tilt its merit-based system towards family-based immigration, to scrap country-of-origin caps and to welcome more skilled immigrants rather than fewer, according to Griswold. BPC’s Director of Immigration and Cross-Border Policy Theresa Brown, who was leading the discussion, also pointed out that Canada and Australia garner public support for immigration by highlighting the instances where it has worked well, something that the U.S. doesn’t always do.