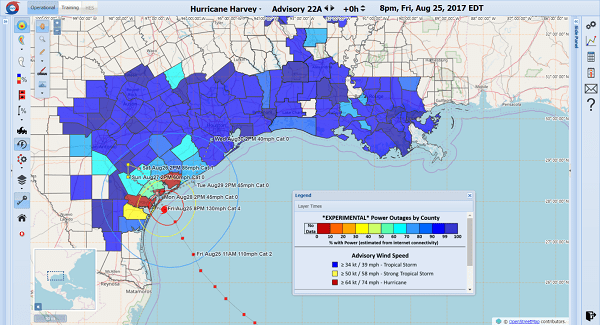 DHS Science & Technology Directorate has developed an integrated platform, based on real-time feedback during Hurricane Harvey, to help emergency responders plan for storms and hurricanes.

HV-X, which was tested during the devastation of Harvey last August, will help emergency managers to make comprehensive decisions about planning and evacuation in time for the 2018 hurricane season.

It has been developed by DHS S&T in collaboration with FEMA’s National Hurricane Program (NHP) Technology Modernization initiative, and it is a modernized and streamlined version of the previously used HURREVAC storm tracking and decision program.

The developmental version was made available to emergency responders before Hurricane Harvey so that it could be modified to add features that FEMA needed in real time in the midst of the crisis.

“It was a stress test of sorts in the sense we expected some heavy usage from our test group of users inside and outside of Texas,” said S&T Program Manager Darren Wilson. “FEMA HQ and Regional National Hurricane Program Management reported the test version of HV-X that was up and running performed well leading up to and throughout Hurricane Harvey.”

The result is a platform that can track storms and provide emergency managers with the detailed information they need to make critical decisions about which areas to evacuate, where extra response will need to be centered, where power outage is likely and where meal and shelter planning needs to be focused.

One of the newly added features to help with emergency response planning is a cyber-based power map. This allows emergency managers to monitor power outages by comparing internet connectivity during the storm with a baseline derived from everyday usage. It means that responders can see how the power grid is being affected town-by-town, how it is recovering and how much initial damage has taken hold.

Planning adequate emergency food and shelter was one of the major challenges for FEMA during Hurricane Harvey, and HV-X is being adapted to make this easier than ever to predict. Based on FEMA feedback, the platform is being developed to predict the number of people who will need food and shelter before, during and after a disaster. This element of HV-X will be fully operational by spring, in time for the hurricane season, and it will replace the manual spreadsheets that emergency managers have to use at the moment.

“HV-X will be successful in real operations across hurricane-prone regions because DHS S&T listened to what emergency managers needed, first and foremost,” said FEMA Director of Planning and Exercises, Response Directorate Josh Dozor. “This program has capitalized on subject matter expertise and created a platform that will help our operators make the difficult decisions needed to save lives.”