Coast Guard Petty Officer Third Class Marine Science Technician Ian Woods, currently stationed in St. Petersburg, Fla., joined the Coast Guard to follow in the footsteps of his three brothers, all who served in the Coast Guard. He never imagined that he would be the driving force behind a piece of Coast Guard history.

PO Woods currently serves as the Coast Guard Enlisted Association (CGEA) Sun Coast Branch president. The CGEA, the junior enlisted counterpart of the Coast Guard Chief Petty Officers Association (CPOA), has many missions – among those, to serve the community both inside and outside of their military gates and to seek the leadership of the CPOA chiefs.

PO Woods has taken the latter mission to heart with his CGEA branch’s latest endeavor. As a forward-leaning community volunteer, PO Woods is always on the search to get involved with worthwhile initiatives. Last year, while prospecting new volunteer opportunities for himself and his CGEA branch, he ran across the Brighter Future Florida website and their project “Circle of Heroes,” which will be the nation’s first underwater dive memorial honoring America’s veterans. According to Brighterfutureflorida.org, the memorial is “located 10 miles off the Pinellas County coast in 40 feet of water.” The site would house life-size concrete statues representing men and women who serve or have served in the United States military.

As of last summer, the Coast Guard did not have sponsorship of a statue to be placed at the site. Upon realizing this, PO Woods immediately contacted the memorial coordinator and began planning to ensure that the Coast Guard would be included in the memorial. This undertaking was not without logistical questions. The need for more than $15,000 to be raised to create a Coast Guard statue and the decision of which Coast Guard hero would be selected as the likeness for the statue were among the most important questions that had to be answered.

PO Woods knew just where to turn for help with those answers. He went to the chiefs at his local CPOA, the Sun Coast Chapter, who work closely with their CGEA branch on a regular basis. CPOA Chapter President Senior Chief Petty Officer Eric Silvoy, currently stationed as the Executive Petty Officer on the Coast Guard Cutter Joshua Appleby, homeported in Saint Petersburg, personally assisted PO Woods with this initiative.

“Having a large chapter, we advocated for Woods’ vision, we helped him strategize to get it to where it needed to be,” said Senior Chief Silvoy. “He was very passionate to make sure that the Coast Guard was included in the memorial and he wanted his branch to be the organization to make it happen.”

But the support by the CPOA did not stop there. With the combined efforts of the CPOA Chapter and CGEA Branch, they were able to raise the $15,000 needed to have the statue made, through numerous fundraising efforts, over an 18-month period. With funding in place, next came the task of selecting a Coast Guard service member whose likeness would represent and honor the sacrifice of many Coast Guard heroes, spanning the service’s 228-year history. This was no easy task, as memorials currently exist for several notable Coast Guard members in other sites across the country. “It’s a hard thing to pick just one person that would represent the Coast Guard as a whole,” Senior Chief Silvoy said. “It’s not just a name on a plaque; it’s a physical representation which, in my opinion, is even more profound.”

Along with local CGEA and CPOA members, Woods researched and presented to his CGEA membership several potential statue honorees before coming to the decision. They selected Coast Guard Seaman Apprentice William Ray Flores, who tragically and heroically lost his life alongside 22 other Coast Guard members on the Cutter Blackthorn on Jan. 28, 1980. The Blackthorn was a 180-foot buoy tender that sank in a collision with a tanker, Capricorn, near the Tampa Bay Sunshine Skyway Bridge. SA Flores threw life jackets to his shipmates as the cutter sank and strapped the life jacket locker door open so remaining life jackets would be released, then provided aid to the wounded aboard the sinking cutter – all of this at the cost of his own life. For these heroic actions, the Coast Guard posthumously awarded SA Flores the Coast Guard Medal in 2000. Additionally, in November 2011, the Coast Guard selected Flores as the namesake of the third of its Sentinel class cutters. Given the geographic location and proximity of the acts of extraordinary heroism performed by SA Flores and the site of the underwater memorial, the local CGEA and CPOA decided that SA Flores would be the appropriate selectee for the Coast Guard’s “hero” at the memorial. 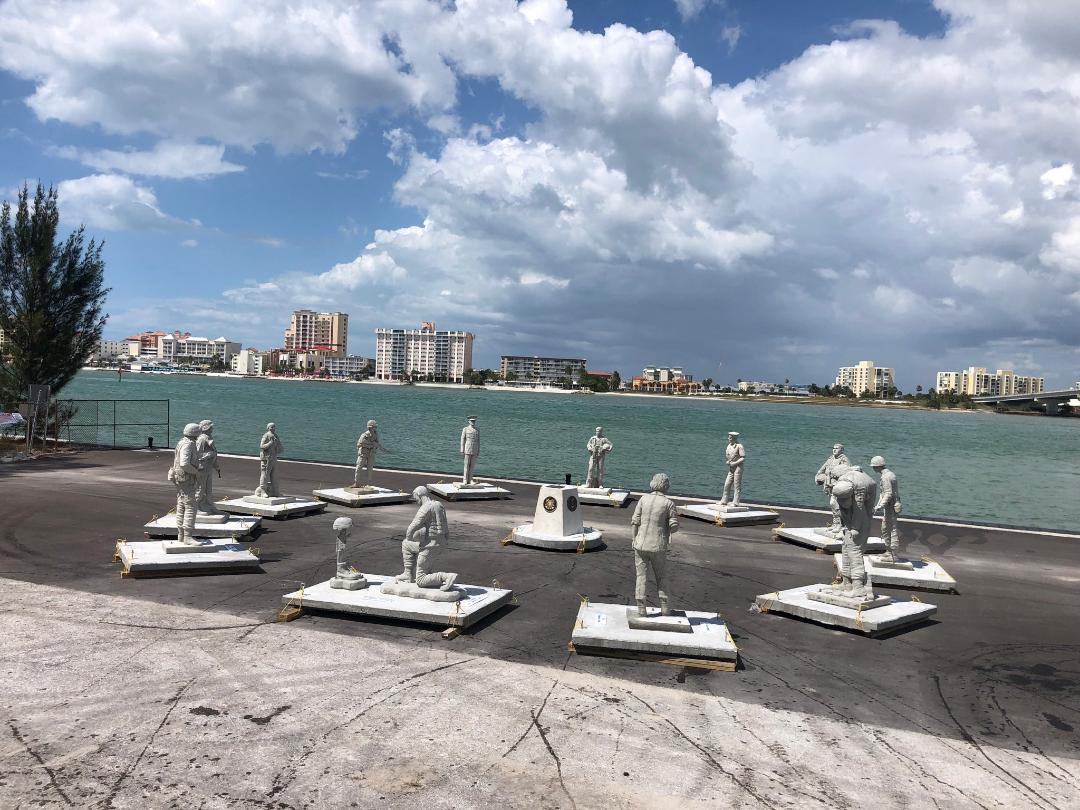 According to PO Woods, the memorial statues will begin being lowered to the Gulf floor in a ceremony to take place in Clearwater, Fla., on May 20. The Coast Guard statue of SA Flores is currently being created by SVJ Creative Designs in Kellogg, Minn., and will be lowered to its location in January. 2020 will also mark the 40th anniversary of the sinking of the CGC Blackthorn. It is expected that several family members of SA Flores, many Coast Guard local and national leaders and local government officials, as well as many of the CPOA and CGEA local and national officers and members, will be in attendance.

Additionally, the local CPOA Chapter and CGEA Branch will soon be releasing a limited-edition challenge coin in honor of the anniversary. The coin will feature a tribute to the CGC Blackthorn on the front and a silhouette of SA Flores, with 23 stars on the back. The stars represent the 23 lives lost aboard the CGC Blackthorn and can also be seen on the back of the statue of SA Flores. According to Senior Chief Silvoy, the coins should be available for purchase within the next two weeks on the Sun Coast CPOA Facebook page. Proceeds will go toward future CPOA and CGEA service projects.

The dedication and efforts of the Sun Coast CGEA and CPOA have been evident by their growing memberships and noteworthy endeavors. Most recently, these associations stepped forward for their shipmates and those impacted by the 2018-2019 partial government shutdown and Coast Guard pay lapse by standing up one of the largest nonprofit food pantries during the crisis. Additionally, these associations assist with community projects and fundraising that benefit their local area, service members and Coast Guard families. Through all of these actions and their devotion to the “Circle of Heroes” memorial, they are truly living out the Association’s motto: “In respect for those who have gone before us, and as a guide for those who follow.”