Sept. 26 marks the 100th anniversary of the loss of U.S. Coast Guard Cutter Tampa and its crew after being torpedoed by a German submarine during World War I.

The ship sank to the bottom of Great Britain’s Bristol Channel in three minutes that night, killing all 131 people aboard.

The bodies of two Coast Guard crew members washed ashore in Lamphey, Pembokeshire, Wales, and were discovered by villager Mary Brace. One body was returned to the family in the U.S., while the other, who was never identified, is still interred in Lamphey to this day. Local residents care for the grave with compassion and devotion.

Andy Cunningham, a veteran of Her Majesty’s Royal Navy, has taken a personal interest in this guardsman who lost his life so long ago. He wrote to the USCG Chief Petty Officers Association (CPOA) to express concern that the gravestone is deteriorating with age and added his hope that the CPOA would be interested in helping restore the grave. He has sent many pictures and articles about the grave and the church where the unidentified guardsman is laid to rest.

The engraving on the headstone reads: “In loving memory of our unknown shipmate from the US Coast Guard Cutter Tampa torpedoed in the Bristol Channel, Sept 26 1918. Erected by the USS Tampa Coast Guard post 719, American Legion, New York.”

In honor of the Lamphey church taking care of the crewman for soon to be 100 years, the CPOA has raised funds to help with future upkeep of his grave and will be sending a framed certificate expressing their gratitude. CPOA Executive Director Randy Reid will send prayers or notes from members along with the certificate. Cost permitting, in addition to a headstone, the CPOA could provide a plaque embossed with the Coast Guard Chief Petty Officers logo, and donate an American flag for the interior of the church.

Cunningham, who often visits the grave to pay his respects, believes Lamphey is a suitable resting place for the war hero.

“I do think that this little part of the church grounds belongs to the USA, as his grave is right in the middle with the local graves, and not in a separate area, which I think is a good thing. I believe his grave serves as a beacon for all his shipmates who are still out there, but not forgotten,” he said. “He is close to his ship, buried not far from his shipmates. If he had been identified, he could have been repatriated, and maybe forgotten. He may have wished to be home, but his mates have kept him close. As an ex-Royal Navy sailor myself, I appreciate that.”

World War I was the first time that the newly established U.S. Coast Guard (created from the 1915 merger of the Revenue Cutter Service and the Life-Saving Service) operated under the command of the U.S. Navy. Based in Gibraltar, Coast Guard cutters Tampa, Seneca, Yamacraw, Ossipee, Algonquin, and Manning made up Squadron 2, Division 6 of the Atlantic Fleet Patrol Forces. Their vital mission was to protect convoys from submarine attack. 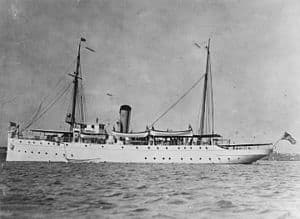 Before meeting its fate, Tampa escorted 19 convoys from Gibraltar to Britain. On Sept. 26, 1918, Tampa parted company with the convoy HG-107 and proceeded to Milford Haven, England. As Tampa was nearing the Bristol channel she was attacked by a German U-boat. Tampa, then known as Miami, was built by the Newport News Shipbuilding Company in Newport News, Va., and launched on Feb. 10, 1912. She was Revenue Cutter number 22, and launched the same day as her sister ship, Unalga. Supervising her construction was Capt. Richard O. Crisp, who would later write the history of the Coast Guard in World War I.

Following the sinking of Titanic in April 1912, Miami was assigned ice patrol duty with Seneca in 1913. She spent winters in the North Atlantic and summers on hurricane duty off the Florida coast. Each year, starting in 1913, she participated in Tampa’s Gasparilla Festival, a maritime pirate show, until the United States entered World War I in 1917. Miami enjoyed a close relationship with the city of Tampa, and was renamed Tampa in 1916.

Tampa was one of six Coast Guard cutters on convoy duty in European waters during World War I, and the only one that never made it home. She escorted convoys without major incident and earned a special commendation for exemplary service.

Tampa’s sinking was the single largest loss of life for the Coast Guard during World War I. The tragedy’s impact was felt worldwide. In the United States, the city of Tampa conducted a fundraising campaign, Remember the Tampa, to sell war bonds. In 1921, the Coast Guard christened a new cutter in her name, and in 1928 dedicated a memorial to her crew at Arlington National Cemetery. Many Tampa mothers and widows participated in the Gold Star Mothers pilgrimages to Europe sponsored by the government in 1931. Families erected memorials to their loved ones, and many American Legion posts around the country are named in honor of Tampa’s crew.

Today, the Coast Guard plans a memorial event at headquarters to mark the cutter’s loss 100 years ago. The church in Lamphey, where the unidentified crew member is laid to rest, will also hold a memorial service to commemorate the event and pay respects.