Document advocates attacks not just on rail infrastructure but on the trains themselves, targeting brakes or the couplers between rail cars. 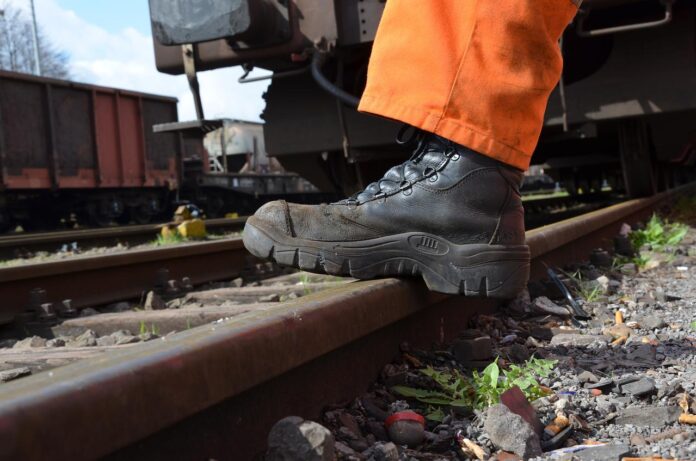 An accelerationist guide that includes more than 30 pages of tactical advice on attacking various critical infrastructure sectors led with pointers for violent extremists to hit key rail lines with the aim of derailing cars, causing death and damage, and disabling vital routes.

The document includes a call for mass shootings of migrants in an effort to deter undocumented immigration, suggestions to infiltrate facilities providing abortion services with the aim of attacking staff or patients, threats for acts of mass violence against crowded venues, declaring that “memorials are our monuments” in praise of mass shooters whom they refer to as “saints,” a call to emulate the 2016 mass shooting at the Pulse nightclub in order to strike the LGBTQ community, and more.

On one page of the document, an “educator” muses that “some guy was telling me quick dry cement is EXTREMELY effective for derailing trains.” A “pupil” responds that “one guy could build a mold to make tiny concrete ramps quickly and repeatedly on all of the tracks in a junction.”

Trains lead a lengthy section deeper in the guide about how to target various infrastructure — followed by cell towers; trucks and depots; roads, bridges and highways; water treatment and distribution; commercial business; communications; electrical systems; and HVAC systems — penned by an anonymous “saboteur” who writes, “I have not committed all of the acts discussed in this guide, but if it’s in the lineup then I definitely know someone who has, and consulted them heavily before putting anything here.”

“Aside from death, this type of sabotage has huge potential of economic ramifications, causing delays, and imposing terror toward corporate entities involved in this industry,” the guide states, adding that they’re aiming for two types of impact: “the suffering your target will withstand, including the cost associated with restoring itself,” and “the heightened security on the local and national level in reaction to the demonstrable damage that can be done toward this target.”

Encouraged to look for “gaps in the enemy’s shields,” accelerationists are advised to consider surveillance technologies being used to protect trains and tracks including drones, what types of surveillance technology and/or guards are deployed, how long it would take local law enforcement to arrive at the scene, how accessible the targeted area is, and how noticeable certain forms of attack are.

As far as tactics, the author first discusses ways to tamper with junction boxes and then tracks, advocating that the attacker get familiarized with the rail system and choke points in order to “strike long-distance hauling track” and use a VPN when doing online research to “protect yourself in as many ways as possible.” A personal GPS device was suggested to pinpoint track locations while cell phones were discouraged.

Track sabotage tactics discussed included fire as a weapon, digging around tracks and ties, disassembling rail and tie attachments, and deforming the tracks with thermite, which is called “a simple tool that every saboteur should be capable of making whether they have access to advanced tools and materials or not.” The guide also discusses blocking tracks with bulky or strategically placed objects and tampering with rail switches.

The document advocates attacks not just on rail infrastructure but on the trains themselves, targeting brakes or the couplers between rail cars.

The cover story for a 2017 issue of al-Qaeda in the Arabian Peninsula’s Inspire magazine was train derailment operations, with a recipe for a derailment tool, an illustrated timeline of devastating derailments in America, and a map of passenger and freight rail lines belonging to Amtrak, Norfolk Southern, Union Pacific, BNSF and CSX lifted from the Department of Transportation.

As both ISIS and al-Qaeda have been highlighting terror attack methods that eschew suicide and leave the jihadist alive to conduct another attack, the Inspire issue stressed that targeting train tracks could be preferable to attacking train cars or populated stations.

“America’s railroads are estimated to be a 1/3 of the world’s railway. So how can they protect 240,000 km of railroad … it is practically impossible. The same goes to Britain, with 18,500 km and France, with 29,473 km. It is a daunting and almost impossible task to protect the long railroad length, and yet one of the easiest to target. That may result to great damage and destruction on different levels,” al-Qaeda’s “Lone Jihad Guidance Team” wrote, adding that “it is time that we instill fear and make them impose strict security measures to trains as they did with their air transportation.”

“We have to expose more of their vulnerabilities in their security,” the writers added. “And when they spend millions of dollars to tackle a vulnerability we should be ready to open a new [front]…  we expect that there will be no effective solution to the security gaps that may be caused by these types of operations that target the train system.”

AQAP was particularly interested in the popular Acela high-speed route running between D.C. and Boston, as well as discussing the Amtrak Cascades, the Coast Starlight, the Pacific Surfliner, the Palmetto line and more.

“This is the most suited condition for a successful train derail operation. When a train reaches high speed then it has to be reduced to around 100 km/h. This is because a train at a very high speed is hard to control or manage using brakes. For example America’s high-speed train ‘Acela’ requires a whole mile so that it can come to a halt, this is because of the train’s very high speed. Another reason is that the train losses weight and stability when it is at high speeds,” the article stated. “Therefore a Mujahid must be aware of areas where the train increases its speed and places where the train moves at a high speed.”

Even more effective, al-Qaeda argued, is a scenario “that makes the different security agencies sleepless” — if a jihadist could wage a complex “dual operation” attacking a train hauling hazardous materials through a well-populated area. “Observing and surveilling the movements of these Hazmat trains” was key, the magazine said, as well as tapping into open-source intelligence available from government agencies and other outlets in the U.S.

Step-by-step instructions showed jihadists how to make a “derailment tool” to clamp onto a track composed of concrete, rebar, sheet metal and rubber. A DHS official later told HSToday that the tool, as detailed in the pictorial open-source instructions, was assessed as not strong enough to be able to take a train off the tracks.

Still, would-be terrorists of all stripes have been experimenting with the recipes circulated in the public domain by al-Qaeda. Akayed Ullah, an ISIS supporter convicted in November of unsuccessfully trying to detonate a device in a New York City subway tunnel during the 2017 Christmas season, reportedly was reading Inspire and used Christmas lights in his pipe bomb; a 2015 al-Qaeda tutorial showed how to use a Christmas bulb to put a three-second delay on a pipe bomb explosion.

ISIS supporters have also included rail lines in their propaganda posters that urge lone jihadists toward specific methods or targets.

And the 2017 conviction of a D.C. transit officer — the first cop in the U.S. charged with attempting to support ISIS — underscored the potential of an insider threat at rail stations under protection.

Nicholas Young, 38, of Fairfax, Va., was a Metropolitan Area Transit Authority officer assigned to the Takoma Park station who tried to financially aid ISIS in 2016 and, previously, lied to investigators about an associate he believed had traveled to join ISIS; the Justice Department said Young schooled an FBI source “on how to evade law enforcement detection by utilizing specific travel methods and advised the [confidential human source] to watch out for informants and not discuss his plans with others.” He was sentenced to 15 years behind bars.

While soft targets from the El Paso Walmart to the Tops Friendly Markets in Buffalo have been hit by killers coupling mass shootings with their extremist manifestos, attacking critical infrastructure and deploying CBRN agents remain holy grails — dirty bombs were called exactly that in the 261-page accelerationist guide — for terrorists because of the potential for higher casualty counts and larger-scale disruption or chaos intended to further their goals.

Another accelerationist handbook that is 14 pages long and recently was being shared among extremist Telegram channels calls for shooters to bypass softer targets in favor of causing chaotic blackouts by emulating on a broader scale the unsolved 2013 sniper attack on a California transmission substation. The document refers to the power grid as “the main thing that keeps the anti-White system going” and calls power distribution substations “sitting ducks, worthy prey” that are “largely unprotected and often in remote locations,” setting the stage for a spree of attacks.

The guide theorizes that the power grid could be “crippled” over a large area if three similar substations were struck simultaneously or within days of each other with “armor piercing rounds,” arguing that with an extended blackout “all hell will break lose [sic]” and white supremacists would be poised to take control. Referencing the practice of extremists bestowing “sainthood” upon mass shooters who meet certain criteria, the document declares that an extremist who successfully attacks the power grid would be revered “above Sainthood when the lights don’t turn back on and we are plunged into urban warfare.”

The guide also mentions “telecommunications/Internet, oil transportation/pipelines, water lines, and similar things” as being prime targets because “they allow for all that we hate and despise” by supporting a diverse population.