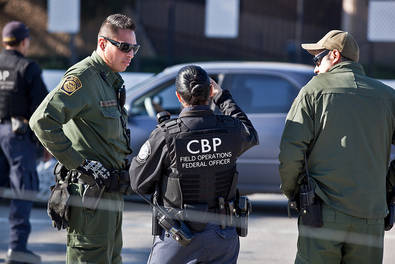 Customs and Border Protection (CBP) is updating the categories of records contained in the Border Crossing Information (BCI) System of Records to include the capture of biometric information including digital fingerprints, photographs and iris scans at the border as part of the Department of Homeland Security’s (DHS) “ongoing effort to better reflect the categories of records in its collection of information,” DHS announced Monday.

CBP also is updating the categories of records collected from an associated Advance Passenger Information System transmission to accurately represent collection of personally identifiable information at the border.

According to DHS, “This system of records allows Customs and Border Protection to collect and maintain records on border crossing information for all individuals who enter, are admitted or paroled into, and (when available) exit from the United States, regardless of method or conveyance. Border crossing information includes certain biographic and biometric information; photographs; certain mandatory or voluntary itinerary information provided by air, sea, bus and rail carriers or any other forms of passenger transportation; and the time and location of the border crossing.”

This system of records notice was previously published in the Federal Register on May 28, 2013, and a final rule exempting portions of this system from certain provisions of the Privacy Act was published on February 3, 2010, and remains in effect.

DHS/CBP is updating this system of records notice to provide notice of the collection of biometric information from US citizens and certain aliens upon arrival to, and departure from, the United States.

Although this updated system is effective upon publication, DHS said it “will accept and consider comments from the public and evaluate the need for any revisions to this notice.”

DHS is statutorily mandated to create and integrate an automated entry and exit system that records the arrival and departure of aliens, verifies alien identities and authenticates alien travel documents through the comparison of biometric identifiers. Certain aliens may be required to provide biometrics (including digital fingerprint scans, palm prints, photographs, facial and iris images or other biometric identifiers) upon arrival in or departure from the United States. The biometric data is stored in the Automated Biometric Identification System (IDENT) information technology platform. IDENT stores and processes biometric data (e.g., digital fingerprints, palm prints, photographs and iris scans) and links biometrics with biographic information to establish and verify identities. The IDENT information technology platform serves as the biometric repository for DHS, and also stores related biographic information.

Previously, DHS established the United States Visitor and Immigrant Status Indicator Technology (US-VISIT) Program to manage an automated entry and exit system. On March 16, 2013, US-VISIT’s entry and exit operations (including deployment of a biometric exit system) were transferred to CBP through the Consolidated and Further Continuing Appropriations Act of 2013, which also transferred US-VISIT’s overstay analysis function to Immigration and Customs Enforcement (ICE) and US-VISIT’s biometric identity management services to the Office of Biometric Management, which is a newly-created office within the National Protection and Programs Directorate.

DHS said CBP continues to develop mechanisms to collect biometric information from departing aliens since assuming responsibility for US-VISIT’s entry and exit operations. During these operations, CBP officers may employ technology (e.g. wireless handheld devices or standalone kiosk) to collect biographic and biometric information from certain aliens determined to be in-scope pursuant to applicable federal law requiring biometric identifiers from aliens on departure from the United States prior to exiting the United States.

These biometrics are checked against the IDENT system’s watchlist of known or suspected terrorists, criminals and immigration violators to help determine if a person is using an alias or attempting to use fraudulent identification. Biographic and biometric data is encrypted when it is collected, and the data is transmitted in an encrypted format to the IDENT system. The data is automatically deleted from the mobile device after the transmission is complete. The handheld mobile devices incorporate strict physical and procedural controls, such as Federal Information Processing Standard (FIPS)-compliant data encryption; residual information removal; and required authorization for users to sign-in using approved user account names and passwords, DHS stated.

The “collection of additional biometric information from individuals crossing the border (such as information regarding scars, marks, tattoos and palm prints) aids biometric sharing between the Department of Justice (DOJ) Integrated Automated Fingerprint Identification System (IAFIS)/Next Generation Identification (NGI) and the IDENT system. The end result is enhanced access to (and in some cases acquisition of) IAFIS/NGI information by the IDENT system and its users,” DHS stated, noting that, “DHS, DOJ/FBI and the Department of State (DOS)/Bureau of Consular Services entered into a Memorandum of Understanding (MOU) for Improved Information Sharing Services in 2008. The MOUs established the framework for sharing information in accordance with an agreed-upon technical solution for expanded IDENT/IAFIS/NGI interoperability, which provides access to additional data for a greater number of authorized users.”

Consistent with DHS’s information sharing mission, information stored in the DHS/CBP-007 BCI System of Records Notice (SORN) may be shared with other DHS components that have a need to know the information to carry out their national security, law enforcement, immigration, intelligence or other homeland security functions.