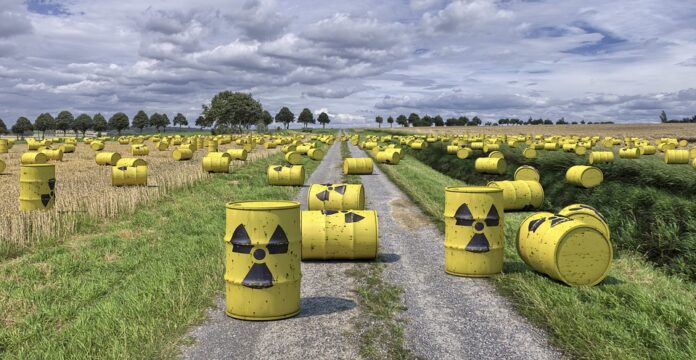 Dangerous radioactive material is used in many medical and industrial applications. But, in the hands of terrorists, it could be used to construct a radiological dispersal device, or dirty bomb, that uses conventional explosives to disperse the material.

Recent security threats have raised concern that terrorists could target radioactive material for theft and use in a domestic attack. From 2010 through 2019, the U.S. Nuclear Regulatory Commission (NRC) reported 2,133 nuclear materials events, which include instances of lost or stolen radioactive materials, radiation overexposures, leaking sources of radioactive material, and other events.

Current assessments of the threat environment show an increasing interest in using radioactive material for making a dirty bomb.

Americium-241, cobalt-60, cesium-137, and iridium-192 are the most prevalent high-risk radioactive materials in the U.S. economy today, and they are frequently found in dangerous quantities. Replacing technologies that use radioactive materials with safer alternatives can protect people and reduce potential financial costs. For example, in May 2019, an accidental release of cesium-137 at the University of Washington showed that even small quantities of radioactive materials pose risks and can cost millions to clean up.

The Government Accountability Office (GAO) has examined six common medical and industrial applications that use high-risk radioactive materials—identified through agency and expert reports—and found that three applications already have technically viable alternative technologies in many circumstances and for which there is market acceptance.

An accident at the University of Washington in May 2019 shows that liability and other potential costs would likely range from millions to billions of dollars if radioactive materials were accidentally released or used in a dirty bomb. These largely uninsured socioeconomic costs are an implicit fiscal exposure for the federal government, which could be expected to provide financial assistance.

Several federal agencies and interagency entities support research and promote adoption of alternative technologies, GAO found. For example, the National Nuclear Security Administration (NNSA) has removed 355 irradiators since 2004 and subsidized the replacement of some with x-ray technology. Congress also established the goal for the NNSA to eliminate the use of cesium-137 blood irradiators in the United States by 2027. At the same time, the NRC licenses radioactive materials for irradiators, consistent with its mission.

Currently, no strategy exists to guide federal efforts to find alternatives and reduce risk, leading to a lack of coordination between agencies, and in some cases, resulting in agencies working at cross-purposes. According to GAO, there is no cohesive federal strategy because the federal government has yet to resolve two opposing objectives: permanent risk reduction where possible, and the continued licensing of high-risk radioactive materials without an evaluation of available alternatives.

NNSA officials told GAO that the Office of Science and Technology Policy (OSTP)-led interagency effort to develop the White House’s 2016 Best Practices Guide injected a sense of top-level investment that temporarily reinvigorated interagency coordination around alternative technologies. However, White House officials in the previous and current administrations told GAO that OSTP has taken no further action to date to verify if agencies are implementing these practices.