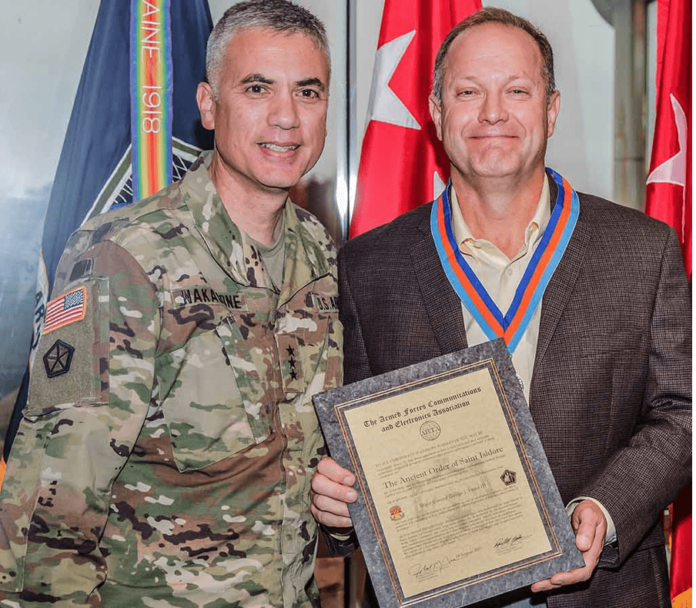 Sponsored by the Armed Forces Communications and Electronics Association (AFCEA), the award is presented annually at three levels – gold, silver and bronze – based on categories of recipients and levels of achievement. Franz received the Gold Level Medallion, awarded to those who have rendered conspicuous long-term service and so singularly distinguished themselves as contributors to the Army Cyber Mission that they have few peers.

Franz joined AFS in October as a cybersecurity expert in the defense and security markets. In his previous role as director of operations for U.S. Cyber Command, Franz led the planning and execution of global Department of Defense (DoD) and Interagency Offensive, Defensive and Global Network Cyberspace Operations. He oversaw the main DoD cybersecurity center, coordinating the network defensive activities of 52 military commands and governmental agencies comprising more than 3 million active users.

Franz was presented the award by Lt. Gen. Paul Nakasone, commander of the United States Army Cyber Command, who cited Franz’s vision and leadership in standing-up the DoD’s Cyber Mission Force, his unique contributions to U.S. Cyber Command operations, and his dedication to supporting the men and women of the U.S. armed forces.

Matt Tait, who leads Accenture’s work with federal defense and national security clients, said, “We are proud that George is being recognized for his many achievements in Army cybersecurity. George is a proven leader in DoD cyberspace and intelligence operations and we’re pleased that he’s part of the Accenture leadership team to help our clients solve their toughest challenges.”

The Saint Isidore Army Cyber award was created in 2011 after Pope John Paul II chose St. Isidore of Seville (560-636), considered by many to be the patron saint of the Internet, to “…represent the highest ideal of the essence of cyber security and the study of the evolving world of challenges of tomorrow.” Franz was among 35 military and civilian cyber professionals honored with the St. Isidore Army Cyber Award this year. Previous awardees include Gen. Keith Alexander, USA (Ret.), former director of the National Security Agency and commander of U.S. Cyber Command.

AFCEA is a member-based non-profit international organization that has helped members advance information technology, communications and electronics capabilities since 1946.