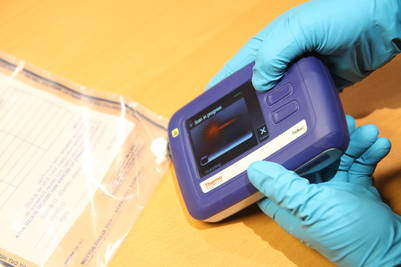 Thermo Scientific’s TruNarc handheld analyzer has been given an expanded TruNarc v1.6 software update library to give law enforcement rapid field detection capability for many new narcotics and synthetic opioids for use by law enforcement agents, narcotics officers and customs personnel.

As part of its most recent v1.6 software update, the TruNarc analyzer adds dibutylone, furanyl fentanyl and U-47700 to its onboard library, which now includes nearly 300 suspected narcotics and narcotics precursors and an additional 80 common cutting agents. TruNarc helps combat drug abuse by enabling law enforcement to quickly identify core drugs of abuse as well as emerging threats. These include dangerous painkillers that have contributed to the growing opioid epidemic in the US.

W-18 is a new designer drug considered to be significantly more potent than morphine and fentanyl. Last year,TruNarc added fentanyl and acetyl fentanyl to its library.

Dibutylone, known as “booty” or “beauty,” is a psychedelic drug in the phenethylamine, amphetamine and cathinone class. It has been linked to recent random acts of violence in Florida, where the Thermo Fisher Scientific Reachback Support team assisted law enforcement by identifying the dibutylone (bk-DMBDB HCl). Furanyl fentanyl and U-47700 are two synthetic opioids distributed in the US as recreational drugs.

Fentanyl has been linked to hundreds of deaths in the US since 2013, a reason why Drug Enforcement Agency issued a briefing in July 2016 stating that the country is in the midst of a fentanyl crisis.

“The TruNarc analyzer, which debuted in 2012, allows law enforcement personnel to scan a single sample for multiple narcotics in one test and receive the results within seconds. An increasing number of law enforcement departments are deploying TruNarc for presumptive testing, helping to eliminate the need to carry multiple chemical tests, reduce drug testing backlogs and speed prosecution,” Vaughn said.

The analyzer identifies chemicals with Raman spectroscopy, a well-established technique. Features and benefits of the TruNarc analyzer include: