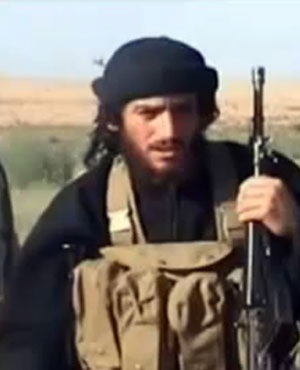 In a new 9:37-minute audio message from Islamic State (ISIS) spokesman Abu Muhammad Al Adnani released Monday through the Al Furqan media company, Al Adnani renewed his call from last September to jihadists to carry out attacks in the West.

“Al Adnani praises the terror attacks that have taken place in Canada, France, Australia and Belgium, while promising at the same time that ‘what lies ahead will be worse … and more bitter,’” said the Middle East Media Research Institute (MEMRI) which monitors Islamist jihadist social media.

Released on Twitter.com/Al_Fateh190, Al Adani’s message was accompanied by English and Russian transcripts, Al Adrani renewed his earlier call for Muslims living in the West to target crusaders wherever Muslim jihadists find them.

“He also notes that those who do not shed a drop of crusaders’ blood will be asked about it in front of Allah,” MEMRI said, adding, “Al Adnani praises the attacks in Canada, France, Australia and Belgium, while promising that those are only the beginning. Below is Al Adnani’s message to Muslims living in the West, followed by his threats to the West.”

"Likewise, we renew our call to the monotheists in Europe and the disbelieving West and everywhere else, to target the crusaders in their own lands and wherever they are found,” Al Adani said. “We will argue, before Allah, against any Muslim who has the ability to shed a single drop of crusader’s blood but does not do so, whether with an explosive device, a bullet, a knife, a car, a rock or even a boot or a fist.”

"Indeed,” he continued, “you saw what a single Muslim did with Canada and its parliament of polytheism, and what our brothers in France, Australia and Belgium did – may Allah have mercy upon them all and reward them with good on behalf of Islam. And there were many others who killed, ran others over, threatened, frightened and terrorized people, to the event that we saw the crusader armies deployed on the streets in Australia, Canada, France, Belgium and other strongholds of the cross to whom we promise – by Allah’s permission – a continuation of their state of alert, terror, fear and loss of security. And what lies ahead will be worse – with Allah’s permission – and more bitter, for you haven’t seen anything from us just yet."

MEMRI said Al Adnani asserted the US-led coalition campaign against ISIS  has failed to defeat or contain ISIS, noting the recent pledges of allegiance to ISIS from a number of jihad groups in Khorasan.

Al Adnani said the coalition forces’ campaign against ISIS hasn’t spread fear inside ISIS, nor was it able to grant them victory. "Gather, o spiteful Crusaders, and assemble your allies from among the apostates, the Rafidites [Shi’ites], and the atheists … gather, conspire and mobilize. The monotheists will not fear you,” Al Adani said.

The ISIS spokesman assured it’s ISIS’s belief and that Allah is on its side.

"It is with this creed that we fight you, o Crusaders … Every mujahid … has complete certainty that you altogether will not be able to harm him …"

MEMRI said “Al Adnani also emphasized that ISIS will remain upon its path, and that its enemies must therefore ‘die in their rage,’” noting, "So praise be to Allah, who has made the Islamic State a thorn in your eyes, a choking pain in your threats, a spear in your chest, and a range burning in your hearts."

Al Adnani asserted ISIS has managed to continue expanding despite the West’s campaign against it, citing the recent pledges of allegiance of a number of jihad groups from Khorasan as an example of the jihadist’s organization’s expansion. Al Adnani called upon jihadists who haven’t joined ISIS in Khorasan to do so."

Al Adnani also called President Obama a dog and coward who continues to rely on the Arab regimes and their armies for his campaign against the Islamic State.

"None of this [i.e. the crusaders’ reliance on Arabs’ support] will benefit you. We will see you [i.e. crusaders] on the ground, and will meet you on land, and we will defeat you here and attack you in your land," Al Adnani stated, urging ISIS fighters to prepare for the battle he said "is about to intensify."