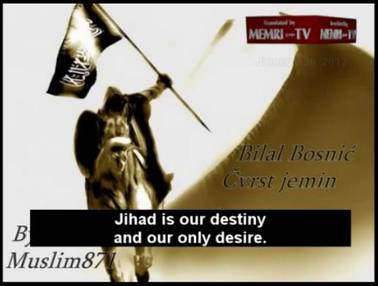 Coinciding with the unsealing last week of a federal indictment handed down in the US District Court for the Eastern District of Missouri charging six natives of Bosnia who immigrated to the United States with conspiring to provide material support and resources to the Islamic State (ISIS) – previously Al Qaeda in Iraq — Bosnian police SWAT teams raided a Gornja Maoca, Bosnian home after the ISIS flag was displayed at numerous residences there. The town has been a hotbed of jihadi activity for years.

“The money and materials were to be provided to Al Qaeda in Iraq,” the February 15 indictment said.

Charged in the indictment are:  Ramiz Zijad Hodzic, 40, his wife Sedina Unkic Hodzic, 35, and Armin Harcevic, 37, all of St. Louis County, Missouri; Nihad Rosic, 26, of Utica, New York; Mediha Medy Salkicevic, 34 of Schiller Park, Illinois; and Jasminka Ramic, 42, of Rockford, Illinois. All are charged with conspiring to provide material support and resources to terrorists. Ramiz Zijad Hodzic and Nihad Rosic are also charged with conspiring to kill and maim persons in a foreign country.

Controlled by a strict Wahhabi branch of Islam, Gornja Maoca for many years has been a hotbed of jihadism and the target of police counterterrorism operations in recent years. Bosnian security forces conducted several raids late last year targeting local Wahhabis, resulting in 26 people suspected of being members of the Islamic State or other jihadist groups in Syria and Iraq or having been involved in recruiting jihadi fighters in Bosnia.

Bosnian intelligence reputedly believes approximately 150 Bosnian jihadi fighters are in Iraq or Syria, and that another 50 or so jihadists are believed to have returned to Bosnia.

According to the June 30 study, Foreign Fighters from the Western Balkans in Syria, by the Combating Terrorism Center at West Point, between 200 and 600 fighters from Balkan nations including Bosnia, Serbia and Kosovo have traveled to Syria since 2012 — compared to the 100 Americans believed to have joined ISIS and other jihadist groups in the region.

Last month, the State Department designated two Balkan fighters, one Kosovar Albanian affiliated with ISIS and one Bosnian who fought with Al Nusra, an Al Qaeda linked jihadi group, as terrorists, imposing economic sanctions on them and any Americans who associate with them.

“Abdullah Ramo Pazara and others persons known to the Grand Jury facilitated the conspiracy by travelling to Syria, Iraq and elsewhere to support the designated [jihadi organizations] and act as foreign fighters by participating in the ongoing conflict and otherwise engaging in acts of violence, to including killing and maiming persons,” the indictment unsealed last week said.

Siki Ramiz Hodzic and Sedina Unkic Hodzic are charged with conspiring to transfer money to other individuals in Bosnia and Herzegovina and Montenegro to support the families of individuals who fought and were fighting in Syria, Iraq, and elsewhere for jihadist groups.

The “charges and arrests underscore our resolve to identify, thwart and hold accountable individuals within the United States who seek to provide material support to terrorists and terrorist organizations operating in Syria and Iraq,” said Assistant Attorney General Carlin.  “Preventing the provision of supplies, money and personnel to foreign terrorist organizations like ISIL remains a top priority of the National Security Division and our partners in the law enforcement and intelligence communities.”

“The indictment … epitomizes the FBI’s commitment to disrupting and holding accountable those who seek to provide material support to terrorists and terrorist organizations,” said Special Agent in Charge Woods. “This case underscores the clear need for continued vigilance in rooting out those who seek to join or aid terrorist groups that threaten our national security.”

“These charges and arrests of people seeking to aid the Islamic State underscores the very reason why we need to ensure that our intelligence and law enforcement tools are robust enough to identify terrorist cells and homegrown terrorists within the United States,” commented House Committee on the Judiciary Chairman Bob Goodlatte (R-Va.). “It also demonstrates once again that those who want to do us harm will often use our immigration system to do so. Our immigration laws, if properly enforced, are an important first line of defense in protecting our nation.

Goodlatte said, “The terrorist threat is real and ongoing and we must remain vigilant so that we protect Americans and our national security.

According to the Middle East Media Research Institute (MEMRI) which monitors jihadi social media sites, “Today, Salafi preachers in Bosnia spread their message via websites and by delivering sermons in Salafi communities in former Yugoslav countries and throughout Europe. Their center is the village of Gornja Maoča,” which is “dominated by a group that follows the teachings of the Salafi-jihadi movement and of Sheikh Abu Muhammad Al Maqdisi and spreads these teachings among Bosnian speakers. In effect, Gornja Maoča forms an enclave that conducts itself independently of the Bosnian state institutions and religious establishment, and where the Bosnian authorities have no jurisdiction.”

“Its leader,” MEMRI said, “is Nusret Imamović, who was born in Bosnia in 1971 and studied religion in Sarajevo and several Arab countries including Saudi Arabia. Imamović also fought in the Bosnian war. Until 2005, he was imam of the King Fahd mosque in Sarajevo — which was built by Saudi Arabia and is said to be the largest mosque in the Balkans — but he came to public attention in 2006 when he became the leader of Gornja Maoča community. His supporters address him as the emir of the village. Imamović broke off all contact with the official Muslim leadership, and replaced the state curriculum used in the local school with materials more suited to his religious views, based on the Jordanian school curriculum.”

In February 2012, Imamović was arrested on suspicion of involvement in an attack on the US embassy in Sarajevo in October 2011. The shooter, Mevlid Jašarević, had stayed in Gornja Maoča before leaving for Sarajevo. Imamović was arrested along with his brother and some of his followers, but was released several days later. Bosnian police at the time staged several large-scale raids on the village searching for weapons.

On April 23, 2012, a Bosnian court indicted Jašarević and two other residents of Gornja Maoča on charges of establishing a terrorist organization and undermining national security by carrying out a shooting attack on the US embassy in Sarajevo.

According to the June 22, 2012 MEMRI report on jihadism in Bosnia, The Global Jihad Movement In Bosnia – A Time Bomb In The Heart of Europe, by research fellows A. Ceresnjes and R. Green, “The indictment stated the attack had been planned in Gornja Maoča, and that the Gornja Maoča group had tried to cover up the trail by hiding the weapons and the DVD featuring a statement by Jašarević in which he declared his intention to perpetrate the attack. His stated reasons were the US activity in Afghanistan, NATO presence in Bosnia and the Zionist occupation of Palestine.”

MEMRI said, “Jašarević is a Serbian-born Muslim from the Sandžak region, which has a Muslim majority. He lived in Austria and was arrested there for criminal activity. Recently he had been living in Gornja Maoča and in the town of Novi Pazar in the Sandžak region. This town has a large Salafi group which follows Nusret Imamović. The center of their activity is the Furqan mosque, whose Imam is a cleric named Abu Safia.”

Imamovic became leader of Bosnia’s Wahhabi community following the death of Jusuf Barčić, who, MEMRI said, maintained close ties with Palestinian businessman Ahmad Shehadeh, the brother of Salah Shehadeh, founder of Hamas’ military wing and founder of the Bosnian office of the Saudi-based International Islamic Relief Organization, whose Philippine and Indonesian branch offices were once declared as terrorist entities by the US and United Nations due to their reputed involvement with Al Qaeda.

According to Radio Free Liberty/Radio Europe, Imamovic told a gathering of 500 people in Tuzla that, "Unlike secularism and democracy, we say there is onlyone truth — law of Allah and Shari’a.” He was joined by Bilal Bosnic – reputedly the leader of the Salafi movement in Bosnia Herzegovina, one of the largest Islamist communities in the country — who criticized democracy with harsh words and has called on young Muslims to join the ranks of the Islamic State.

According to MEMRI, Bosnic was filmed in the area of Cazinska Krajina in northwestern Bosnia preaching beneath an ISIS flag saying, "the truth and the Islamic State survive despite so many attacks of those who are confused and those who fight against the truth.” He urged Muslims to join jihadists fighting to establish a caliphate in Syria and Iraq.

On April 2, 2012, the Bosnian newspaper Slobodna published the article, Gornja Maoča – A Way Station for Wahhabis Embarking on Jihad, which reported the village in recent years had been visited by jihadi fighters being transported to jihad fronts in Iraq and Yemen by Bosnić.

Hundreds of Muslims from Albania, Kosovo, Macedonia, Albania and Bosnia are reported to have traveled to Syria and Iraq to join the jihad there.

At the end of July, a leading Albanian jihadist fighting in Syria posted photos of himself on social media in which he beheads a young man he claims was a spy. A recent ISIS video showed a Kosovo jihadist along with other Balkan fighters destroying their passports after vowing to extend the caliphate to Rome and Spain.

An Islamic State video translated by MEMRI shows a group of Bosnian youth — children of Bosnian jihadists fighting in Syria — who proudly proclaimed their allegiance to ISIS by holding the group’s infamous black flag and chanting, "Allah Akbar" and "the Islamic State is here to stay."

Shown playing with firearms, several of the children sent greetings to "Al Baghdadi and his lions," referring to Abu Bakr Al Baghdadi, the leader of the Islamic State and proclaimed Caliph.

"Send a message to the Crusaders of America: Your grave will be in Syria, our state is victorious,” the children chanted.